TIM Gentle knows now that people in the broader community want to ‘touch’ agriculture and he believes immersive technologies are the answer to people truly feeling farming.

His unique digital experience all started when the dairy farmer’s son won a bus in a Facebook competition about four years ago. 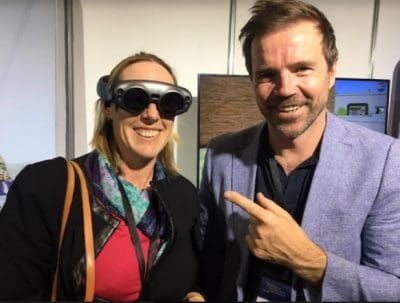 Since then his winning idea to ‘recycle’ the coach into travelling classroom to teach Australia about the digital world has literally grown wheels.

From its launch at the Broadband for the Bush conference in 2016, Tim and his team have ran workshops in the bus from isolated Birdsville in South Australia to Melbourne’s central business district in Victoria.

“Our mission was to drive digital education to regional rural and remote Australia.”

Using virtual reality technology, Tim’s business Think Digital took children wearing a VR headset in a bus in the bush to the Great Barrier Reef, taught others how to use their mobile phones and enabled farmers to link VR with drone technology to view their properties from the air.

Then after sparking the interest of Meat & Livestock Australia, the bus was converted to take the beef Paddock to Plate experience on the road, crisscrossing the country to major field days, shows and schools.

“We put thousands of kids in VR and it wasn’t just kids, I remember popping into some nursing homes and having a bit of a go there too.

“We’ve put over a hundred thousand people in VR over the last three years.”

Then it was lamb’s turn, with the lamb Paddock to Plate story, featuring Victorian wool and lamb producer Michael Craig.

“Mick the producer, I’ve seen nothing like him – he was incredible; talking about the story of food provenance, about the environment and about how amazing we are here in Australia.

A survey of 4500 people who experienced the VR Paddock to Plate lamb trip showed that more than 70 percent had their perception of the industry changed to a moderate to large extent.

“So we all know immersive education works.”

Now this week at MLA’s Australian Ag Immersive Technology Conference in Melbourne, Tim told delegates his experience with mothers, fathers, farmers, teenagers and school kids across the country meant now was the time to jump into VR.

Whereas in virtual reality a headset wearer sees a computer-generated simulation of a three-dimensional image or environment, AR involves deploying a virtual image over real-world objects, creating an illusion that engages users in a virtual world.

“It’s not just the big names, it’s the little producers who want to tell their story”

“Don’t think about it, you need to take the leap of faith – the media love it,” he told conference delegates.

Tim is now working with MLA and other rural development corporations on new projects.

“So it’s not just the big names, it’s the little producers who want to tell their story.”

Tim has also built on the single-user VR headset experience to involve multiple players through his Think Digital Player, enabling interaction with the other participants or avatars.

“This has got huge potential, suddenly we watched the experience together, we commented, we paused, we annotated over the experience and as an educational tool, it was really exciting.”

“You know we have had five countries in VR all at once, talking about different topics in VR, it’s been the most incredible journey.”

And Tim said the digital experience story can continue with augmented reality or AR.

“We can tell our stories using immersive technologies.”

Tim said he had seen there was “a real disconnect with people knowing where their food comes from”.

“And this is a problem I believe immersive technologies can solve.

“We need to attract young people into agricultural careers – we need a workforce – immersive technologies can help with that.”

He said the trainers and teachers also need help to build the next workforce.

“’I’m going to start working as a scientist, a vet, whatever it is and so if we can all work together to create amazing content, we can create the next generation and we are going to help feed the world,’ he said.

“And they are a little bit different from you and I maybe, when we went to school, with blackboards, white boards, overhead projectors, maybe a computer.

“These are the sort of experiences they are demanding,” he said.

“And I can tell you after putting over a hundred thousand people in VR, they are asking to touch the content, not just watch it.

“They love looking at it, the next thing is they need to drive that tractor,” he said.

“So I am going to ask you as a collective today, as you are wandering around, if you can help us feed the world then we’ve done a great thing.”