AS CARBON neutrality and sustainability commitments engulf the world of politics and corporations, two east coast processors have warned the movement is quickly coming for the beef industry.

The subject was brought up at the Meat Standards Australia (MSA) awards in the New South Wales city of Armidale yesterday, where representatives from Bindaree Beef and the Casino Food Co-op said their customers were crying out for carbon neutral.

Similar comments were made at the end of last year by well-known scientist Richard Eckard, who was urging producers to think long and hard before cashing in carbon credits. Victorian supply-chain, Hopkins River Beef, has also made moves to prepare for domestic market demands to become carbon neutral.

“On every mission statement in every hotel in Asia it says that they need to become sustainable,” Mr Carew said.

“We’re making great progress in the sustainability space and we need the producers to get behind us – because this is our way of creating the next benchmark of ‘clean and green’.”

Mr Carew said labelling needed to keep up with the advances in sustainability – and had the potential to limit market access.

“We haven’t started the process of communicating the advances we have made in carbon and sustainability and food service chains around the world need to tick the ‘sustainability’ box.

“The value in that type of labelling might be difference in us displacing Indian ox or Brazilian meat in some of those lower volume markets – we really need those markets.”

A matter of “when not if” 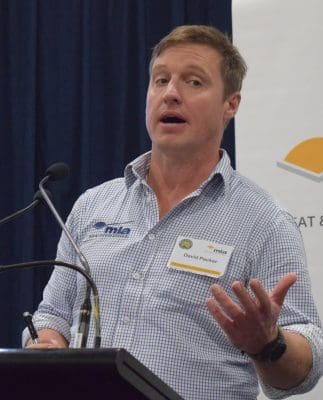 “The fact is it is coming to our industry, it’s a matter of ‘when not if’,” Mr McInerney said.

“Sustainability and carbon neutrality is very high on the radar of the processing industry and we are trying to ensure we are in front of that.

“We are seeing early signs of it in the processing sector with recyclables and supermakets trying to reduce plastics, we’re also seeing products going into a reusable crate rather than a box.”

While sustainability and carbon neutrality was one of the talking points, the role of the Meat Standards was also discussed.

MSA program manager David Packer said over the past 10 years the program had changed its strategy, with almost 200 beef brands using it to verify their product.

“When MSA was first established, there was a heavy focus on consumer education and talking about the trademark,” Mr Packer said.

“These days it is more about underpinning the brands and letting the brand owner do the marketing of their product. MSA is more about ensuring the consistency of the meat quality and brands can do the educating.”