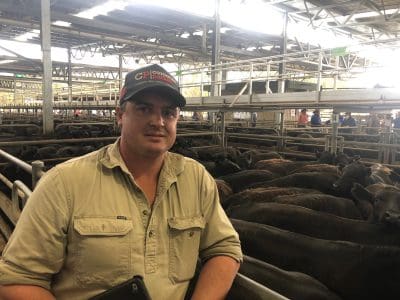 Rodda Manning has been testing the market for low carbon cattle trading displaying his herd’s carbon footprint at saleyards.

A VICTORIAN producer has been testing the market for low carbon cattle trading – displaying his operation’s carbon footprint on pens at this year’s weaner sales.

Rodda Manning from the Mansfield-based Davilak Pastoral company has had his herd’s carbon footprint assessed by Queensland-based Integrity Ag & Environment. The Mannings run more than 2000 Angus cows on several properties across north-east Vic.

The carbon audit first assessed inputs – like fuel, fertiliser, lime and electricity. It then assessed the herd performance – like joining rates, weaning rates and growth rates of young cattle. The rating was put on the pen at the saleyards.

“When we put those cards up at the saleyards, we thought we wouldn’t get much interest or feedback and most people didn’t know what it meant,” Mr Manning said.

“But the interest was incredible, I was peppered by agents, producers, the public and I’ve had emails from Facebook groups wanting more information on it.” 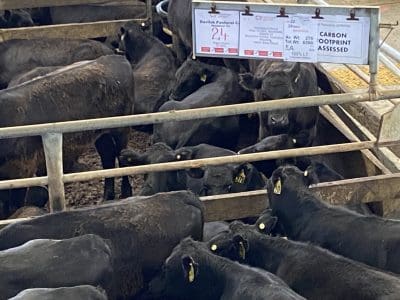 Could there be a market for carbon neutral?

Mr Manning said with cutting emissions being at the centre of public discussions recently and companies making targets to reduce emissions, there was an opportunity for producers.

“If a consumer goes into a supermarket and there is a choice of normal meat and carbon neutral meat, there may be a premium in it for us,” Mr Manning said.

“We believe we will see new markets for low emissions and carbon beef develop in the future and we want to position our business at the front of the pack.

“Being able to collect and transfer that information through the supply chain will be key to entering those markets.”

The idea of low carbon cattle trading has been major topic in the past year, with Australia’s first steaks carrying low emissions claims sampled by industry representatives in August and producers being urged to consider market access before selling carbon credits.

For the buyers, Hopkins River Beef, future carbon requirements have also been on the mind. They have separated the weaners from the rest of the cattle where they plan to keep the carbon assessment going, through backgrounding and lotfeeding. Director David Maconochie said with supermarkets and other companies down the supply chain making carbon commitments, keeping market access in the could be dependent on carbon status.

“We can see the pressure coming from the supermarkets and we are trying to be proactive about it,” Mr Maconochie said.

“It is early days, but you can make the link between the supermarkets having a carbon target and that coming back on the supply chain.

“With the Manning’s cattle, there was an opportunity to do a complete carbon assessment through the supply chain and they have good cattle which we would normally buy.”

Mr Maconochie said the company saw market access as the main reason for reducing carbon footprint, rather than attracting a premium.

“I can’t see it attracting a premium,” he said. “But as a supermarket supplier, if carbon neutral or low carbon is what they want, then you have to give them that.”

“Big business is going that way with shareholder pressure and a lot of supermarkets and processors fit into that category.”

With the positive response from other producers at the saleyards, the Mannings are panning to keep the program going.

“It was only a trial, but we will probably continue with it because I think it has merit,” Mr Manning said.

“It is a global issue and it is something the livestock sector is already facing, so I don’t know how long you can bury your head in the sand about it.”