Early-season EYCI picks up where it left off in 2021, hitting new records

YOUNG cattle prices have well and truly picked up where they left off at the end of 2021, with the industry’s main barometer, the Eastern Young Cattle Indicator, hitting new record highs on Tuesday and again yesterday. 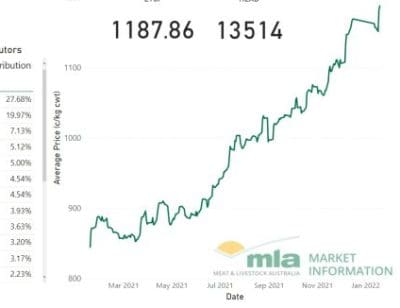 Early sales this week at centres like Roma, Dalby and Casino clearly drove the indictor higher, with several sales this week recording EYCI-eligible cattle averaging more than 1300c/kg for the first time in history.

However Wagga, which traditionally figure among the top half-dozen contributors to the EYCI in terms of numbers, was noticeably light-on this week, contributing just 3.2pc or 432 head to the indicator total, due to limited support from processors and lotfeeders who are bound up in the current supply chain COVID sickness problems.

After an early lull in EYCI performance after the indicator was re-activated for the year on 12 January, falling 11c/kg in five days, it sprang back into life this week. Yesterday’s new record of 1187c was up 25c/kg on this time last week, and 315c/kg ahead of this time last year.

Current momentum is clearly being driven by restockers looking at the lighter end of the EYCI weightrange, accounting for 48pc of all saleyards trading in EYCI-eligible cattle over the past seven days. Pre-Christmas, that figure was below 40pc, with lotfeeders accounting for a much larger share.

Keeping an eye on the current weather influence being seen across eastern Australia (see Wednesday’s weekly weather outlook), restockers are clearly prepared to look past the industry’s current supply chain challenges, and see a strong outlook further ahead for international meat demand.

“The buying patterns among restockers clearly show that there is a longer-term confidence in the industry, heading forward,” MLA senior analyst Stephen Bignell said.

“When you look at the BOM data, very little of Australia is now in drought. But parts of the north have to this point had only average summer rain, and pasture has not yet responded. So there is still some potential upside ahead, in terms of more demand, if late summer rain continues to fall in those areas.”

Given recent beef supply chain challenges caused by large reduction in processing capacity due to COVID and the consequent flow-back to lotfeeders, there has been a percentage decline in recent days in the number of EYCI-eligible cattle going to processors and lotfeeders. A week ago, lotfeeders were still accounting for more than 54pc of all EYCI-eligible purchases.

“Anything within the sights of restockers at sales this week has sold very strongly,” Mr Bignell said.

“The c/kg price differential between restocker purchases and feedlot purchases has crept out to 221c yesterday, based on trading over the past week.

“The difference between the two is growing this year. It was as bit over a dollar a kilo during the later stages last year, despite the weight difference.”

While vealer steers this week have only made up 7pc of the overall EYCI offering, they were averaging 1288c/kg dressed weight, Mr Bignell said.

Those younger, lighter steers – they’re a hot item at present,” he said.

Highlights in the steer category included an EU Accredited Red Brangus weaner pen, offered by A and T Jones, Barmoya, which peaked at 806c/kg and weighed 263kg to return $2124/head.

Kunwarara vendor, D McCartney, also had a good result for their Brangus steer line which returned $2427/head when sold for 844c/kg and averaged 287kg.

I.M Grazing also created a highlight in the heifer category, with a 284kg Droughtmaster line topping at 624c/kg returning $1784/head.

Red Ridge Grazing, Stanage, offered Brangus heifers which made a return of $1775/head when secured for 650c/kg and weighed 273kg.