Animal activists point to problems in Ocean Ute’s past Animal activists have accused Wellard Rural Exports of failing to disclose the full history of the latest addition to its livestock shipping fleet.

Last week Beef Central reported that Wellard Rural Exports has expanded its fleet with the acquisition of the “MV Ocean Ute”, a converted livestock carrier with the capacity to carry 5000 cattle or 20,000 sheep, or a combination of both.

Members of animal activist groups have since pointed out that the ship is the renamed “Pearl of Para”, a vessel that has been at the centre of two animal welfare incidents in recent years.

In September 2013 the Pearl of Para, as it was then known, was forced to return to port at Fremantle with 5420 cattle on board when its propeller coupling was damaged two days into a three week sea journey to Israel.

The ship was able to resume its journey within three days of returning to port, following an inspection of stock on board by RSPCA officers who reported the cattle were in good condition and no breaches of the Animal Welfare Act had occurred.

In 2012, on a journey from the USA to Russia, a failure of ventilation and manure removal systems on the same vessel resulted in the death of 400 pregnant heifers.

According to publicly available information on maritime websites, the 12,600 tonne ship was built as a container vessel in the Netherlands in 1994.

It was launched under the name of Reggeborg and has been renamed several times following various changes of ownership throughout its 20 year history. 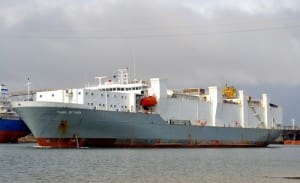 The Ocean Ute in its former incarnation as the Pearl of Para. Picture: www.shipspotting.com.au

The ship was converted to a livestock carrier in 2010, from which time it operated under the name of Pearl of Para until June 2014, when it was bought by Chinese interests who changed its name to the Niuyang Express.

A Wellard Rural Exports spokesperson said the company has made investments in upgrading the vessel following its purchase.

“Wellard chartered the ship for few months and the vessel performed very well,” the spokesperson said.

“Wellard is now planning four weeks in a shipyard in Singapore to further improve animal services and other component to ensure smooth and safe operations.

“The management and maintenance of the vessel has ensured it has operated without issue in the time Wellard has used it on a long term time charter. Voyage success rates have also exceeded the industry average.

“We have every expectation that will continue under Wellard’s ownership and management.”