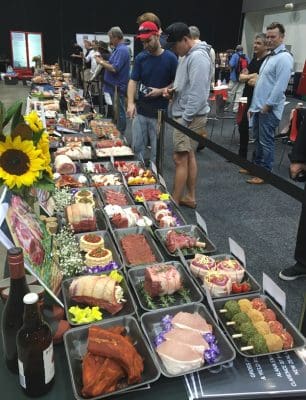 Each country put their own interpretation and skills-set into the raw material they had at their disposal, to create a huge spread of value-added items full of consumer appeal, as the images below show.

What’s remarkable is that the vast array of products was produced by the four teams in just three hours’ of competition time, starting with whole bodies of lamb and pork and a side of beef which firstly had to be broken-down and seamed-out for preparation into countless different retail lines. Similar skills were shown in the apprentice competition, judged on an individual, rather than teams basis

What was evident is that value-adding work in retail butchery continues to evolve in new and exciting directions, whether it be happening in a butchery in Wellington, Liverpool, Perth or Montpelier.

“It’s come a long way, even in the five years since this event started as a low-key affair involving NZ and Australia in 2011,” he said. “This event is showcasing our trade to the people of Australia, NZ and now around the world, and what an artform skilful and creative butchery can be,” Mr Slater said.

“Already in NZ, this opportunity is attracting young people back into the trade, which has been lacking for a long time. The second thing is that any time we can get to expose our industry and our exciting products to the consumer, it’s a great thing.”

Mr Slater said true red meat value-adding was not only about ‘eye-appeal’ in a window tray, but it also had to perform well in the cooking stage. This year, extra emphasis is being placed on cookability, and there are extra marks available in judging to reflect that, he said.

“It has to cook-well and eat well, as well as looking good.”

Guest judge for the event, international chef and restaurateur Sean Connolly, said the modern consumer was always looking for something new in the meat protein space, especially if it ticked the boxes of time-saving and convenience in their busy lives.

“They are looking for new flavours, techniques, that allow them to cook at home, but rather than doing it all from scratch, to take some of the preparation leg-work out of it,” he said.

“Increasingly, butchers are showing they can create that for them, and at an affordable price. Today, it’s about traditional butchery with a modern twist. There’s new items on display here today that I’ve never seen before, and that’s great,” Mr Connolly said.

“Butchery now is a real artform – taking muscles and smaller pieces and transforming them in new and creative ways. It continues to evolve, and it’s part of a real renaissance that’s happening in butchering. It’s an exciting space to be in, and to see these world championships is a fantastic showcase for these skills.”

Caul fat as a wrapping medium:

All four international teams demonstrated creative and innovative uses for caul fat, also known as ‘lace’ fat – a fine cobweb-like membrane from the lining of a pig’s stomach. Caul fat had its origins in Italian and Greek-style sausage and smallgoods, but is now finding many new applications, such as a a wrapping medium over meat proteins, holding in place herbs, flavoured butters or other ingredients close to the meat. The caul fat melts during the cooking process, adding to flavour and moisture in some items that might otherwise risk getting dry. Caul-fat wrapped items in Saturday’s competition ranged from oven-bake mini-roasts like topside pieces, to seasoned minced meat items for baking, like an individual meatloaf, and even steak-cuts. Here’s some examples: Tomahawk steaks (bone-in rib-eye cut from the fore-rib, with the entire rib-bone still attached) remain an on-trend item in retail and food service, presented by the international teams in a range of innovative and often eye-catching ways.

The tomahawks added a distinct ‘wow’ factor to many of the displays. There was perhaps less emphasis on marinades or rubs in displays in this year’s competition, but greater use of fresh ingredients – fresh herbs, spinach and other leaves, spring onions, crumbs and seasonings, cheeses and savoury items like olives and capers used in stuffed and rolled items. Lacing, using butcher’s twine, was in evidence as a means of holding generously-stuffed items together during the cooking process.

Where marinades were used, some were oil-based in vacuum seal bags, with additional chili flakes, fresh herbs or other ingredients added to the individual serve-sized bag. 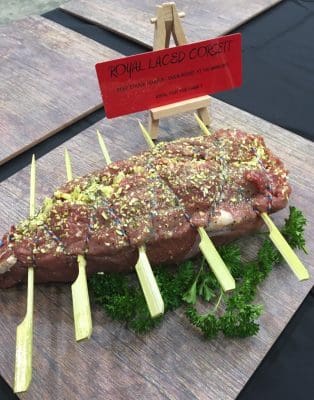 This stuffed chuck tender show creative use of lacing, using skewers as anchor-points. 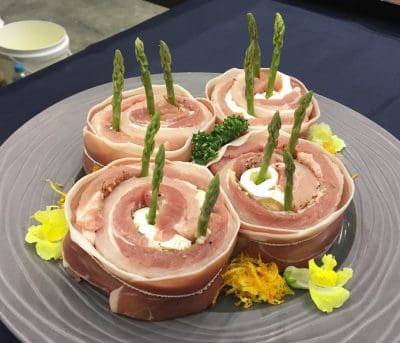 There was clear evidence of a growing emphasis on seam-cutting of larger primals into smaller items, many of which are well-suited to value-adding work. Flat-iron steaks (seamed oyster blade), petite tenders from the bolar blade and goose skirt made an appearance on some of the displays. 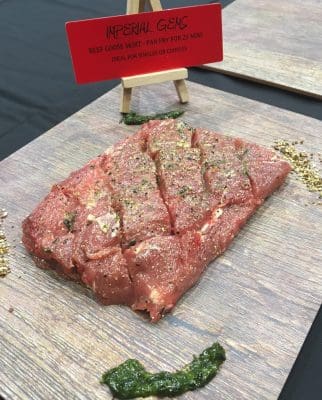 Demographic studies show a greater proportion of people in developed countries now live as single occupants or couples, rather than larger households. Many value-added items are ideal for this segment, and a lot of the products showcased in Saturday’s event carried suggestions along those lines.