Editor’s note: Since this item was first posted, we’ve added the short video below, showcasing some of the competition action, butchering and retail presentation skills that were on show….

The unique event, being held for the sixth time, pitted 24 of the world’s best retail butchers in an intense three-hour team battle to break down sides of beef, lamb and pork and convert the raw material into a first-class value-added retail butchery display.

Australia’s team of gun butchers, the Steelers, performed exceptionally well during the high-pressure three-hour competitive challenge, delivering an outstanding and highly attractive display, but were beaten by a better team on the day. Event convenor Trevor Saville from Saville’s Fresh Meat Market at Helensvale, said the Challenge was all about pitting some of the best tradesmen and women from across Australasia, the UK and Europe in a test of knife skills, presentation flair, value-adding ability and retail savvy.

As always, the event was an incredible showcase for value-adding skills, designed to add convenience, and reduce preparation time for busy householders who still want to produce a quality home-cooked meal for the family.

Beef Central has prepared this separate item this morning, focusing on the value-added product trends evident among this year’s entries. As can be seen in the photos embedded in that article, the event served to showcase latest trends in value-adding work in retail butchery, which continue to evolve in exciting new directions.

The World Butchers’ Challenge has grown out of the former Tri-Nations Butchers Challenge, involving teams from Australia, New Zealand and the United Kingdom, held six times since the low-key inaugural event in 2011. Other countries, including Ireland, are looking to join the competition next year. Aussie team, foreground, French team (black) and UK team (red) during the heat of the competition.

The teams of six were judged on their preparation, knife skills, product innovation and value-adding, presentation, finishing and display, and articulation – all elements that the global butchery industry sees as vital ingredients to the longevity and continued growth of independent butchers.

Some items will be taken through to cooked stage for a taste test component. A sausage section, including taste test of the cooked product, will be included for the first time.

In addition to the main competition for teams of six experienced butchers, there were apprentice and ‘Young Gun’ (qualified tradesmen/women under 30) categories for individuals. 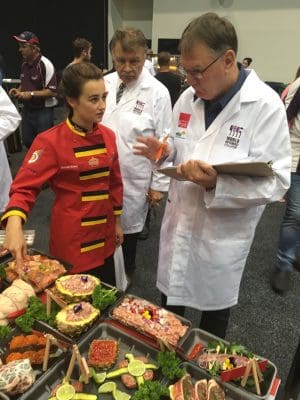 Named international apprentice butcher was Hohepa Smith from New Zealand, while the ‘Young Gun’ international butcher of the year was Alana Empson, also from NZ.

Our representatives in the international apprentice competition were Ryan Dougherty from Bruce’s Meats in Adelaide, and Suzanne Roeger, from Melbourne. Australian apprentice Ryan Doherty from Adelaide, shows off his presentation after judging

Major sponsors for the World Butchers’ Challenge this year are Australian Pork Ltd, and Meat & Livestock Australia. All of the MSA beef and lamb, and pork carcases used in the competition were provided by vertically-integrated red meat producer and wholesaler, Woodward Foods Australia, which is in transition from its old business name of Murray Valley Meats.

Preceding the Challenge was a five day study tour taking in NSW and southern Queensland, which attracted about 70 participants.

Editor’s note: Our sharp-eyed Francophiles out there picked up the fact that the original headline on this story read “Viva la France!” It was pointed out that the correct word is ‘Vive’. We must have been thinking of Las Vegas.