THE recent lifting of the ban on imported Japanese beef into Australia has some stakeholders in the Wagyu industry curious about what impact it will have on domestic business. In short, it may impact a little on suppliers into high-end steak, Japanese and Korean cuisine restaurants, but beyond that, it is not likely to be significant, the Australian Wagyu Association said in a statement issued today.

“There are a few reasons why this is the case,” the AWA said.

In a recent consultation between the AWA board with Meat & Livestock Australia’s market insights manager for Japan and Korea Miho Kondo, and MLA’s business manager based in Japan, Andrew Cox, the sentiment was clear that Japan had a few hurdles to overcome for export to Australia to be viable.

AWA chief executive Dr Matthew McDonagh said the original ban was put in place in 2001 after an outbreak of BSE in Japan, to protect Australia’s biosecurity. As reported earlier on Beef Central, in early June, the Department of Agriculture approved the recommencement of chilled or frozen beef imports from Japan – provided all the necessary measures were in place to mitigate identified risks.

According to Andrew Cox, exporters in Japan are not rushing ahead to export to Australia, principally because the Australian market does not represent a significant commercial opportunity. He said the focus for the Japanese beef industry was to target countries such as Taiwan, which has a significant number of Japanese cuisine restaurants, where demand for Wagyu was high.

So just how much beef does Japan export and to where?

Analysis by Ms Kondo showed that markets such as Hong Kong, the US and Singapore were the primary export countries for all Japanese beef, while Cambodia and Tajikistan show significant levels, but are believed to be grey channels into China. Since Taiwan opened its doors in 2017, it is now the fifth largest market for Japanese beef.

“Prior to the detection of BSE in the Japanese herd in 2001, the last full year of Japanese beef exports to Australia was less than 500kg,” Mr Cox said. The highest level reached was around 750kg in the late 1990s.

“Given that things have changed since then, and Japan is now more geared toward exports, the total export volume is now around ten times what it was in the late 1990s. The Australian landscape has also changed in that time, with a greater foodie culture that would take-on products such as Wagyu,” he said.

The cost of importing Wagyu into Australia would put the Japanese product at a higher price than locally produced Wagyu beef.

“The feeling among commercial operators in Japan about prospects to export to Australia is not one of great excitement,” Mr Cox said. “Exporting to Australia is more about the kudos for the Japanese beef industry – that they have cracked our stringent biosecurity nut and potentially made it easier to transition into other markets. We don’t see Japanese beef imports into Australia as a huge competitor,” he said.

Australia’s biosecurity standards are well known to be among the toughest in the world and Japanese exporters would still need to ensure that all the accreditation boxes have been ticked before shipments can commence.

The discussion with Mr Cox and Ms Kondo did suggest, however, that challenges within Japan would be more of a hindrance to future trade than biosecurity.

Overall Japanese beef production is in gradual decline, for two reasons. The first is a recent trend for the younger generation to move away from high-end products such as Wagyu for general consumption in preference for leaner, cheaper meats.

The Ministry of Agriculture, Forestry and Fisheries in Japan aims to maintain 2015 levels of domestic beef production, but indications suggested this may be difficult to attain.

This in itself presents a challenge, as Japanese beef producers compete and promote products based on their prefecture, making it difficult to implement an over-arching government strategy to sell Wagyu to the domestic and international consumer.

“A national strategy makes sense from an export point of view, and successful trade shows into Europe and the US have shown the Japanese government can do it,” Mr Cox said.

“But with the ongoing disconnect between prefectures, supply and the international strategy, Japan has a few challenges to overcome to develop new export markets. It will be a while yet before it has impact on Australian shores,” he said. 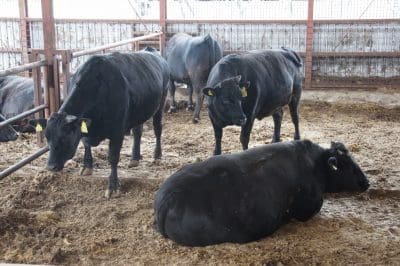