More than $8.5 million is anticipated for Deniliquin’s historic signature property Yaloke, which has been held by the Wragge family for more than 100 years.

More than $8.5 million is anticipated for Deniliquin’s historic signature property Yaloke, which has been held by the Wragge family for more than 100 years.

Located in New South Wales’ Riverina, 23km west of Deniliquin, the 3342ha holding, pictured above, features some of the district’s most enviable livestock and farming country.

Yaloke is a mixed farming enterprise consisting of sheep and cattle, and irrigated and dryland cropping. The grazing country has native timber along the gullies and low-lying areas and there is 200ha of salt bush plantation for livestock grazing and winter shelter.

Water is a feature. The property has 10km of Wakool River frontage, with access to both Murray irrigation and river water, as well as having substantial water storage.

James Sides from Nutrien Harcourts said Yaloke has been passionately developed and maintained over four generations.

“It represents a truly remarkable investment with substantial and meticulously presented and maintained livestock improvements,” he said.

These include a large-scale machinery shed, cattle yards and a grand 100 year old woolshed, as well as hay sheds and significant grain storage.

He said the owners were planning to retire and enjoy other pursuits.

“There has been enormous interest from locals and from southern slopes and tablelands and plains producers seeking expansion, with several offers already made.”

Yaloke will be auctioned bare on December 4.

Scale and productivity in northern NSW

After 21 years of ownership, George and Loy Rose have decided to offload their Longford Aggregation near Armidale in northern New South Wales.

The couple purchased the Longford block from the Commonwealth Scientific and Industrial Research Organisation in 1999.

“The asset carries a great reputation and was well known as the home for both the Longford Angus cattle and Merino sheep studs,” Mr Starr said.

“An ongoing pasture renovation program combined with strong fertiliser inputs have further bolstered the reputation of Longford in its capacity to deliver prime sale stock with excellent weight for age,” he said.

Longford is boasting an abundance of feed and can carry 1000 breeders or 15,000 DSE.

Water is supplied via a network of troughs fed from a reticulation system, several reliable creeks plus a large number of dams with good capacity.

Longford will be auctioned bare as a whole on December 18. The successful purchaser will be given first option to buy all or part of the livestock on offer.

Comprising five holdings in central western New South Wales, the aggregation was put together by Bathurst-based Rhonda Wilson about 15 years ago. The sale coincides with the retirement of her brother who has been managing the operation.

Gilgai Farms is currently being operated for breeding and fattening of both sheep and cattle. However, it does have a mixed farm ability, with cropping having been undertaken in the past.

Spanning 2183ha, the pastures on the Gilgai Farms comprise a mix of native and improved perennial and annual grasses that underpin a 13,500 DSE carrying capacity.

It is well watered by 77 dams, a reticulated water system supplied from a bore yielding 3150 litres per hour, and pumping stations on five large dams that total 90 megalitres of storage.

Col Medway from LAWD said Gilgai is boasting an abundance of feed after good rain.

“The seasonal conditions were tough last year, especially in the state’s central west, however, the region has now experienced the biggest rebound. The mixed grazing farming land, with a 600mm rainfall, is particularly good value compared to other areas,” he said. The most productive, high-rainfall sections of two of the largest landholdings in South Australia’s Barossa region will be offered for sale.

Keyneton’s 2549ha Karinya Station and 2047ha Red Creek were historic sheep properties established more than 150 years ago that have been run as a single operation for the past 30 years.

The properties were put to market via an expression of interest campaign in September by Colliers International.

Selling agent Jesse Manuel said so far, the sale of around half of the total landholding had been negotiated.

“Most of the eastern rangeland country has sold. This means we are now offering the higher rainfall parts of the properties which are located closer to the Barossa,” he said.

Colliers’ Tim Altschwager said the uniqueness and scale of the properties have attracted a diverse pool of buyers.

“Given the smaller area of land that the homestead now sits on, we expect renewed interest from lifestyle buyers or city-based investors attracted by the prospect of an imposing country estate in proximity to the amenity of Adelaide and the Barossa Valley,” he said.

Red Creek, established by Joseph Keynes in 1842, and Karinya Station established in 1919 by Col. E.T. Dean, showcase the spectacular landscape of the district.

Adjacent to the Henschke winery, Red Creek has been owned and operated by the Keynes family for five generations and is renowned for producing high quality Merino wool, crossbred lambs and Angus beef cattle.

It is noted for its highly productive pastures and quality infrastructure, including modern steel sheep and cattle yards, which are included in the sale. Keyneton’s 2549ha Karinya Station and 2047ha Red Creek were historic sheep properties established more than 150 years ago that have been run as a single operation for the past 30 years.

A Sunshine Coast cattle property that sits on top of the largest alluvial sand deposit ever discovered in Queensland is likely to fetch between $7 million and $10 million.

Situated at Meridan Plains, near the Corbould Park racecourse, the 208ha Honey Farm Road cattle fattening operation has been held by the Page family for around 20 years.

While the property could be retained for cattle production, it could also be converted to a major solar farm with Energex’s new 132,000-volt powerline from Mooloolaba to Bells Creek running adjacent to the property.

However, it is the sand mining potential of the land that makes it such an exciting investment opportunity, according to Simon Cudmore from CBRE Agribusiness.

“The Meridan Plains sand deposit contains more than twice the known resources of sand under extractive approval in the state and could supply southeast Queensland’s sand needs for the next 35 years, or the Sunshine Coast’s requirements for 200 years,” he said.

“With the potential of the Meridan Plains sand deposit estimated at more than 100 million tonnes and worth at least $1 billion wholesale, the cattle property is attracting a wide range of corporate investors, high net worth individuals and land bankers,” Mr Cudmore said.

Honeywell Road is for sale by expressions of interest closing December 2. A Sunshine Coast cattle property that sits on top of the largest alluvial sand deposit ever discovered in Queensland is likely to fetch between $7 million and $10 million.

The 38,942ha property once formed part of the Hewitt family’s former home, the large-scale breeding Mount Cooper Aggregation, which included the 48,700ha Harvest Home (recently sold to a local grazing family for an undisclosed price).

Hewitt Cattle Australia has decided to rationalise its property portfolio to support its directional change to organic red meat production.

The country on Mount Cooper comprises open forest grazing and open ironbark goldfields, with around 2500ha of pulled softwood scrub.

It features significant Burdekin River and dam frontage, and is watered by three equipped bores, 27 dams and numerous natural springs.

Stock water is reticulated to 22 troughs via extensive poly piping and many of the dams have been newly constructed, with most of them fenced.

The sale is being handled by Peter MacPherson from Queensland Rural. Set across 402ha, Marapana will be offered as a whole or as seven contingent allotments by Elders by expressions of interest closing on December 9.

The country has a balance of productive and versatile soil profiles, high performance perennial pastures and a strong lime and fertiliser history (established in consultation with industry experts). After more than five years on the market, one of the largest individual landholdings in Victoria’s Macedon Ranges Shire has switched agents and is being offered for sale by expressions of interest.

The historic and picturesque Glengarry Station is a 714ha grazing and dryland farming operation at Darraweit Guim, 43km from Melbourne, on the edge of the city’s Urban Growth Boundary.

Its substantial land banking potential with future development upside, could see it make around $18 million.

Flanked by low density subdivisions, the property is expected to appeal to land bankers looking to capitalise on the rapidly expanding population of Melbourne’s northern growth corridor.

Glengarry Station is being offered by EOI closing on December 9. 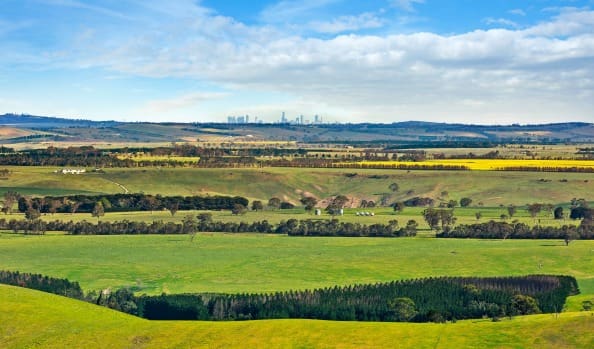 The historic and picturesque Glengarry Station is a 714ha grazing and dryland farming operation at Darraweit Guim, 43km from Melbourne, on the edge of the city’s Urban Growth Boundary.

Thallon’s Niminbah in western Queensland is already attracting enquiry from locals, as well as from producers in northern New South Wales.

The 3885ha property, 2km east of Thallon and 82km south east of St George, have been owned by brothers Ross and Allan Montgomery since 1953.

The country ranges from grey coolabah flood-out, grey brigalow melon hole, red wilga, box and sandalwood soils. It hasn’t been stocked for the last two years, so the property is offering a good body of feed.

Around 2430ha has been farmed in the past, however these areas were returned to pasture in the mid-1990s.

The cultivation country has a good cover of buffel and native pastures which have been used for grazing since the farming operation finished.

Water is supplied by dams which have been renovated and de-silted in the past two years.

Andrew Jakins from Nutrien Harcourts Goondiwindi said it was difficult to offer a price guide because there had been no recent sales in an area that is generally tightly held.

Niminbah will be auctioned on December 18. Thallon’s Niminbah in western Queensland is already attracting enquiry from locals, as well as from producers in northern NSW.

Spanning 3707ha, the property is located 55km west of Stanthorpe and 150km from Toowoomba in southern Queensland.

Verona has a history of sheep breeding for fat lambs, cattle breeding and specialist wool growing and has large quantities of standing hardwood for timber harvesting.

The country consists of open grassland to sheltered grazing, featuring mostly Queensland blue grass and other native grasses and herbages.

It is estimated to conservatively run 6000 DSE in a sheep/cattle mix, however further development could see this number lifted.

Around 12km of exclusion fencing has been completed and a further 7km is currently under construction.

It is well watered by creeks with permanent and semi-permanent water holes plus springs, complimented by 19 recently desilted dams.