LEADING Australian pasture researcher Associate Professor Max Shelton has been presented with the prestigious AW Howard Medal in recognition of a career that has helped livestock producers in Australia and globally.

The AW Howard Medal – named after Amos Howard, whose 1889 discovery and subsequent use of subterranean clover as a pasture plant was critical to Australia’s agricultural development – is awarded biennially to a person who has made a significant contribution to the advancement of pastures in Australia.. 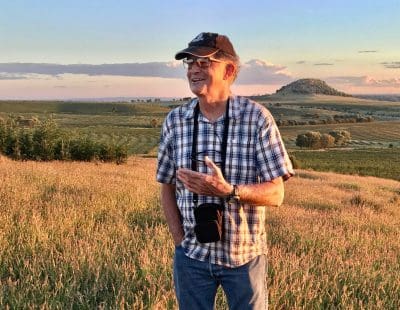 Associate Professor Shelton’s greatest impact has been through his work on leucaena, a browse legume shrub native to Central and South America, which is used throughout the tropics – including northern Australia – as livestock fodder.

The award presentation took place today at the Australian Agronomy Conference in Toowoomba.

“Leucaena is the most sustainable, productive and profitable pasture system for not only northern Australia but also the rest of the tropical world,” Prof Shelton said.

After completing his PhD, Prof Shelton spent most of the 1970s working in Thailand and Laos. Describing this period as his “adventurous phase”, he went on to a global career spanning much of Southeast Asia as well as stints at the Universities of Oxford, Hawaii and Florida, and the Food and Agriculture Organisation of the United Nations in Rome. He was also a regular visitor to Mexico, the home of leucaena, presenting at conferences there and in other Latin American countries.

While Prof Shelton has retired, he has remained active and completed the second edition of the Meat & Livestock Australia publication “Leucaena – a guide to establishment and management” in 2021. He has also assisted with work on developing a sterile leucaena.

Prof Shelton regards his work promoting the uptake of leucaena by graziers in northern Australia and later by smallholder farmers in eastern Indonesia as career highlights.

“There are now thousands of smallholder farmers using leucaena to fatten cattle in Indonesia,” he said. “I’m proud to be part of a project and team that’s made such a fantastic difference to people’s lives.”

The majority of his career was spent at the University of Queensland, where he helped foster a new generation of pasture scientists by supervising 35 research higher degree (Masters and PhD) students, 41 coursework Masters research projects; and 58 undergraduate research projects.

“Nevertheless, I’m deeply appreciative and it goes without saying that, as for any successful career, it has been a team effort.”

As part of the award ceremony, Prof Shelton presented an oration on “Leucaena: seven decades of research, development and extension – what have we achieved, and what’s next?”

Associate Professor Shelton encourages pasture researchers – especially those focused on northern Australia – to apply for one of the scholarships and fellowships on offer through the not-for-profit AW Howard Memorial Trust.

The awards encourage and promote research and investigation in the fields of natural science and social science (including economics) relating to the development, management and use of pastures.

Grants are available for a range of career stages, from students to established researchers, as well as graziers and pastoralists. Applications are currently being sought for Howard Trust Honours and Masters Scholarships, Postgraduate Research Fellowships and the Tim Healey Memorial Scholarship.

Established in 1964 to commemorate the unique contribution of Amos Howard, the Trust seeks applications each year from the research and academic community for its various awards, grants, scholarships and fellowships.

The Trust has awarded more than 400 grants since it was established by the then Australian Institute of Agricultural Science (now Ag Institute Australia) through donations from benefactors.

Application forms and nomination guidelines are available via the SARDI website.

More information is also available via the Trust’s executive officer at howard.trust@sa.gov.au.