GENERAL shortage of slaughter cattle, combined with uncertainty and volatility in international meat markets has prompted JBS Australia to close its huge Dinmore beef processing plant near Brisbane for a week.

The decision again flags the ‘disconnect’ that is occurring between Australian cattle prices – currently the highest in the world – and the potential revenue available in the current COVID-impacted global beef market. 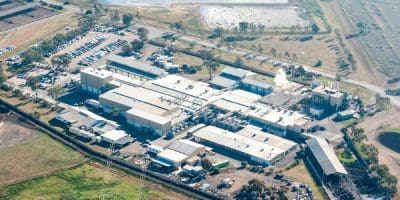 The nation’s largest beef plant, Dinmore currently processes around 1370 head per shift, ten shifts per week, accounting for around 13,700 head in a typical working week. At full capacity, the plant can kill 1700 per shift, and employs more than 1600 staff.

Other than for weather-related issues, it’s the first time that Dinmore has lost a week’s worth of production for at least five years.

The temporary closure affects no other JBS processing plant, Beef Central was told.

The decision to close a plant the size of Dinmore for a week has enormous financial consequences, but reflects the depth of the supply challenges facing processors.

Two years of sustained drought across eastern Australia has seriously impacted slaughter cattle supply this year, and as the nation’s highest output plant, Dinmore is more exposed than any other during times of supply challenge. As a result, slaughter cattle prices have risen over the past six weeks, both through saleyards and direct consignment.

“The loss involved in shutting a plant like Dinmore for a week is extreme, but we just cannot fill a kill roster for next week,” JBS Northern chief operating officer Anthony Pratt told Beef Central this morning.

Asked whether simply lifting price further would solve the supply dilemma, Mr Pratt said that could always be done, but it became a matter of “how much money do you want to lose?”

It got to a point where closure was a better financial option than killing a reduced number of stock, he said.

At the same time, Mr Pratt said he had not seen it this difficult to sell Australian meat into the international market for at least a decade.

“The COVID impact is still very apparent. If anything, global trading conditions are getting worse,” he said. “Trying to get bids on forward meat for export is extremely difficult presently, in all market regions.”

JBS Northern buyers were absent from today’s weekly Dalby cattle sale, and a sequence of sales held earlier this week.

Asked whether it was certain that Dinmore would return to work on Monday week, Mr Pratt said it was the company’s intention, but with current market volatility, trying to predict more than a week forward was very difficult.

“Anything more than four days forward currently is a brave prediction,” he said. “We will assess the situation again next week.”

“This meat market has become just so volatile, it is impossible to predict any trend beyond next week.”

A number of single-site processors in NSW and Victoria have been running on substantially reduced weekly shifts over the past three weeks.

Beef Central made a reference to a possible closure of a large southern Queensland beef plant in Tuesday’s weekly kill report, although at that stage JBS had not reached a final decision about next week’s operations at Dinmore.