WHAT’S driving the eye-watering advance in premiums being paid for Angus feeder steers over generic flatback feeders over the past 12 months?

As recently as the beginning of last year, the Angus premium on heavy feeders suitable for +100-day feedlot programs was worth only around 15-20c/kg liveweight across parts of eastern Australia. That advantage has now blown out to 95-100c/kg.

A number of supply chain managers spoken to for this report suggested on Friday that 530c/kg was the going rate for heavy flatback feeders in the paddock currently, while Angus were 630c/kg, and higher in places.

In past years, the Angus premium occasionally got to 25c/kg, which proved ‘enough’ to incentivise many breeders of British-type feeder cattle, because it represented a bonus return of $80 to $120 a head, depending on weight. Today, that premium is typically worth around $400 a head.

Angus Vs flatback heavy feeders +400kg on AuctionsPlus since 2019 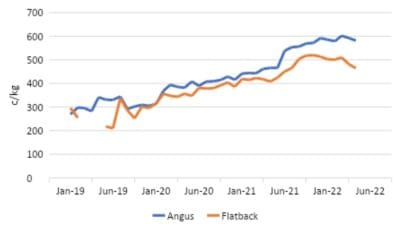 As can be seen, there has been a dramatic divergence between Angus (blue line) and flatback feeders (orange line), especially since around March last year, now reaching its current all-time record high.

Also worth noting in the graph, the Angus premium virtually disappeared during the depths of the drought – especially around October 2019 and again in early 2020, due to oversupply pressure.

This time last year (May 2021), good Angus heavy feeders on AuctionsPlus were making 466c/kg, and flatbacks 408c/kg. By March this year, Angus feeders averaged 602c/kg and flatbacks 510c, and that advantage has continued to grow.

The manager of one of the largest commercial feedlots in Australia told Beef Central the trend in Angus premium in his region had started more than a year ago, but had gained momentum more recently.

“It bounces around a little, and it depends on who you talk to. There are obviously smaller feedlot operators out there that might have more money than that, because they don’t have the established long-term relationships in the marketplace. They may be waving their chequebook around even more now – but they might only buy a hundred head and then disappear,” he said.

The first is the booming demand for quality beef across global markets this year, as the COVID veil lifts, consumer confidence returns, and food service markets get back on their feet. More than ever, quality is high on the priority list for cashed-up consumers eager to get out after 2019-21 lockdowns, and marbled Angus beef is a popular part of that. 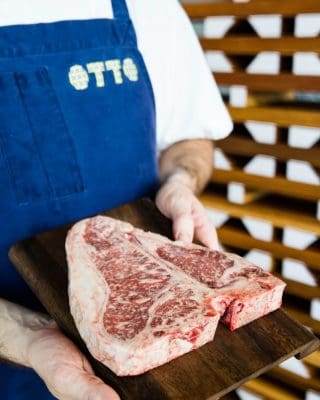 Consumers want to do things well when they eat at home, entertain, or go out for dinner, and marbled beef is a strong part of their response, being prepared to pay a significant premium for it.

Angus breeding females across NSW, Victoria and southern Queensland were liquidated in record numbers during the 2019-20 drought.

When it came time to re-populate those breeding paddocks after the seasons started to break  during early 2020, Angus females were either in very short supply, or prohibitively expensive. Instead, producers who previously bred straight Angus for brand programs settled for females of virtually any breed they could get their hands on, simply to ‘put calves back in the paddock.’

As reported earlier, large numbers of Santas, Brahmans, Droughtmasters and other bos-indicus and Taurus breeding females flowed into NSW and even Victoria after the drought broke.

That process, in turn, has produced a relatively larger number of crossbred calves – no longer eligible for Angus beef brand programs. This has heavily driven the current $1/kg premium for Angus feeders, Beef Central was told.

“When we were forced to kill all those pregnant Angus cows out of the south during 2019, we were inevitably going to impact the supply of Angus feeders later on,” one large supply chain manager said. “You couldn’t just go into the market and buy any quantity of Angus replacement cows.”

“If you go back to 2019, the NSW tablelands and southern NSW – both heartland areas for generating Angus feeders – were probably the hardest hit in Australia from drought. There was a huge number of Angus cows taken out of the system, sent to slaughter. It didn’t rain in that region until about February 2020, taking further Angus cows out of the system that year as well,” the supply chain manager said.

“Where we are sitting right now, we’re in the smallest drop of Angus cattle, as a result of the 2018-2019 joining period so heavily impacted by drought. We’re at the peak of the impact.”

“I think if you did a survey, it would be mind-blowing how many more crossbred cattle there are in NSW at the moment, in paddocks that used to run straight Angus, as desperate beef producers got hold of whatever females they could, after the rain returned.”

None of those crossbred progeny would qualify for an Australian Angus commercial beef brand program at present. Brand programs operating under verification systems administered by Angus Australia  require 100pc Angus genetics, while some others (JBS and Teys, for example) accept a minimum Angus breed content of 75pc (Angus x Angus cross with no bos indicus or dairy influence).

“In order to re-qualify for Angus premiums, they either have to bred their way back or buy their way back, securing Angus breeding females, which are themselves making huge premiums at present,” the contact said.

As an example of recent Angus breeder replacement pricing, Paraway Pastoral Co last month sold close to 200 PTIC Angus heifers and young cows from Victorian and NSW holdings on AuctionsPlus, ranging from 376kg to 612kg. Heifers made from $2700 to $3060 and cows up to $3560.

The situation was inevitably having an impact on the volume of genuine Angus brand program beef being produced this year, the supply chain manager said.

“And to make the situation worse, there are more grainfed supply chains trying to do an Angus brand program now that ever. It has made the competition that much more intense, for the scarce eligible cattle that are out there. And added to that, more Angus females are again being directed into Wagyu F1 breeding programs, further impacting the availability of straight Angus feeders.”

All this suggests that it could be a year or two, at least, before Angus females can fully restore the population of straight Angus feeders necessary to satisify Angus brand program requirements.

“It will slowly get there, but it takes time. In many cases, Angus breeders have had to start from an Angus heifer to produce straightbred cattle again,” the supply chain manager said.

“The only thing that will change the current premium for Angus feeders is time. You can’t paint them black.”

“There may be a little more relief in terms of a few more Angus feeders available by October this year, when autumn drop 2021 Angus calves start to hit the market.”

Premium as strong as it’s ever been

Speaking to Beef Central during Friday’s RNA branded beef competition results announcement in Brisbane, Stockyard Beef’s marketing general manager David Clark acknowledged that the Angus feeder premium presently was as strong as it had ever been.

Stockyard currently processes around 17,000 fed Angus cattle each year – many destined for the company’s Stockyard Gold 200-day program – a figure which has doubled in the past five years, making the current Angus supply challenge all the greater.

“The current premium says a lot about the strength of ‘brand Angus’ in the marketplace, and overall global demand presently for higher quality beef,” Mr Clark said.

“Is it sustainable? I’m not sure, but hopefully we will see bigger numbers of Angus feeders flush out next year, as post drought recovery continues, and that should bring the price differential back to a more reasonable level.”

A livestock manager for a large Queensland grainfed beef business said his company’s Angus grainfed branded beef program was currently killing around 800 a week, down from 1200 prior to the drought impact – simply because the feedlots (company-owned and outsiders) fell short of their Angus feeder target.

On the meat side, another large grainfed beef processor said his company had had conversations with export customers about switching from Angus-specific brands to his company’s other non-breed specific brands, due to supply and price.

“We’ve had discussions with some customers overseas, saying, ‘Try this grainfed branded product instead. It is British/Euro based, 120-day grainfed and MSA-graded, and will still eat consistently well’.”

“But for whatever reason, they still want Angus. They know what Angus is, and how it performs, so it is an easy thing to request in an order, especially when their customers are prepared to pay for it.”