PREDICTIONS made over the past 12 months that young cattle prices might reach 800c/kg during the livestock supply void left after two years of drought might have been scoffed at earlier, but they came into reality this week, as the Eastern Young Cattle Indicator swept into record territory overnight.

AuctionsPlus also hit a new record high in online trading this morning, when a line of Angus steer weaners from Gilgandra, central western NSW, 5-6 months averaging 177kg, made a new record high of 717.5c/kg liveweight, or $1270 a head. (Note: AuctionsPlus results are not included in the calculation of the EYCI, which is based on a rolling weekly average of 25 major saleyards’ transactions, weaners and vealers 200kg plus.) MLA market information analyst Stuart Bull said the EYCI had been pushing up towards the 800c/kg barrier all week.

“It’s a significant milestone, by any standards,” he said.

Some people had anticipated that a another very strong Roma store sale on Tuesday might be the trigger for the milestone to be reached, but while Roma reached 838c/kg for NLRS-eligible weaner cattle, the indicator fell just short on Wednesday, reaching 799.25c. Roma’s sheer size often exerts a greater influence on the EYCI’s movements, but several other sales early in the week were not quite as strong.

But later sales including Dalby, recording its strongest ever sale on Wednesday, and Dubbo on Thursday were the final trigger for the EYCI to enter new ground above 800c, Mr Bull said. There was no fortnightly Armidale sale held yesterday.

The other factor behind the climb was that the EYCI is constructed on the basis of a seven-day rolling average, meaning earlier sales (at lower price levels) that progressively dropped off the formula also assisted in pushing the figure to the new record today.

What’s also evident is the declining number of EYCI-eligible cattle being traded, as the year wears on.

The data graphed here shows that for the seven days ended yesterday, about 11,900 EYCI eligible cattle were sold in NLRS monitored eastern states sales, versus about 17,000 head for the same seven-day period last year. 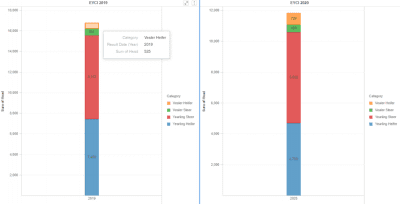 “The fundamental reasons behind the new record is high demand for young cattle on the back of seasonal conditions, while supply is seriously compromised by herd reduction caused by the extended drought across eastern Australia last year,” Mr Bull said. “It’s been the story for the past few months, but the effect has only continued to be accentuated recently.”

He said rainfall forecast for large parts of eastern Australia over the next week, and through spring in BOM’s longer-term forecasts, would only be likely to add to the current record-setting young cattle price environment.

“That’s likely to be seen particularly in Queensland, where the season has not yet broken like it has in areas further south.”

“It will only spread the demand more widely, if the forecast rain delivers. Queensland could play a larger part in demand in coming months, if it sees this rain,” Mr Bull said.

As clearly seen in AuctionsPlus trading in recent weeks, a number of Queensland beef producers – some as far north as Prairie, near Hughenden – who normally take their young cattle through to heavy feeder entry weights of 400-450kg have already sold next year’s feeders early, to cash-in on the extraordinary spring 2020 young cattle market. Most of those cattle have shifted further south, into southern Queensland or southern states for backgrounding.

See this week’s earlier report on Kimberley cattle being sold into southern states as backgrounders.