Dear Reader
For the last few years I have translated by monthly beef report into Bahasa Indonesia to provide a wider coverage to Indonesian readers.
I have funded this service from my own funds but unfortunately I am no longer able to do so.
If there are any individuals or companies who would like to fund this translation then I would be happy to discuss the details with them and provide advertising on the blog in return for their input.
The cost is approximately AUD$100 per month.
If nobody is interested then I will stop the translation although the original English version of my report will continue.
Thankyou for your support
Dr Ross Ainsworth
Author South East Asian Beef Report.

Slaughter steer prices rose once again to end the month with an indicator rate of Rp45,000 per kg live weight.

Rp46,000 is no longer uncommon with prices as high as Rp48,000 mentioned by traders for exceptional cattle.

Retail prices have finally started to move upwards, but only by a very small margin, reflecting that butchers are not yet able to pass on the full price rises to their customers.

Wet market retail beef price rises were reported to have risen up to Rp5,000 (50 cents) per kg for selected cuts, well below the surge in slaughter cattle rates.

Over the next few months the full increase in pricing will slowly be passed on to retail customers but in the meantime,  it appears that the majority of the additional costs of slaughter cattle will be shared between the lotfeeders, butchers and retailers.

Indian buffalo beef is helping to fill the gap for those consumers on a tight budget. Discounts on frozen buffalo are no longer a feature of the retail market with the full rate of Rp80,000 per kg now seen in most markets. 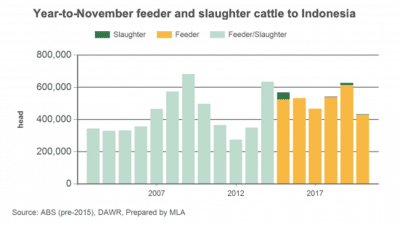 The graph from MLA above reflects the reduced rate of feeder imports, although just over 400,000 for 11 months is a very encouraging figure when the 40% rise in feeder steer prices since April 2020 is taken into consideration.

The November feeder steer export number was close to 20,000 while 30,000 head were dispatched to a range of Indonesian ports during December 2020.

Darwin feeder steer prices are a firm $4 per kg live weight with stressed buying of small lots reported as high as $4.18.

Future rates are expected to fluctuate between $4 and $4.05 until the new season opens in April/May.

Townsville slaughter cattle continue their high levels at $3.70 to $3.80 for heavy cattle with an occasional report of $4 when a final truckload is needed to fill the ship.

Slaughter cattle prices increased across the market once again during December with the average rate up by Dong4,000 per kg, double last month’s rise.

As a result, demand is down although my agents report no change in the wet market prices with only a small increase at the supermarket so it appears that Vietnamese importers and butchers are also absorbing the majority of the Australian price increases at the present time. 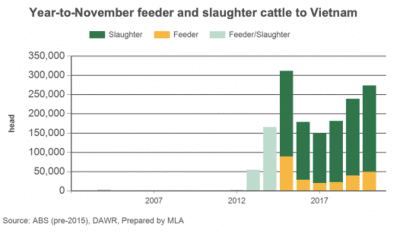 Despite the rapid increase in the rate of imports shown above, local beef supplies remain under pressure on many fronts with a combination of severe flooding, falling domestic herd numbers,  recent extremely cold weather and an outbreak of a new skin disease of cattle in the Hanoi area.

African Swine Fever (ASF) continues to wreak havoc in the domestic pork industry with the government reporting losses of almost 6 million pigs since the beginning of the epidemic in 2018.

Given this mix of market forces we can only hope that the consumers of Vietnam are able to slowly accept higher prices over the next 3-6 months as the chances of cheaper CIF rates are negligible. Slaughter prices were relatively steady during December with both Beijing and Shanghai reporting a rate of Y36 per kg live weight.

Retail beef prices were slightly weaker for the December period while pork prices rose sharply in both Beijing (up 6%) and Shanghai (up 15%).

The OIE map below shows that the ASF epidemic is ongoing across China with a number of new outbreaks reported in both back yard pigs, larger production farms and wild pigs from 11th to the 24th of December 2020. 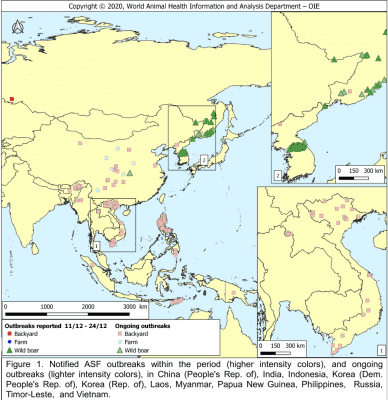 OIE map of the ASF situation in Asia during the period 11th to the 24th of December 2020.

I received a number of comments last month from Filipinos stating that the prices I have been reporting were higher than the actual market rates.

I discussed this with the person who reports for me who responded that while his prices were very high, they did in fact reflect real prices in his local area of Mindanao, where the pandemic was responsible for a number of new costs associated with the production, purchase, processing and distribution of beef cattle.

In other areas, costs of slaughter cattle and beef may well be less, depending on the extent of the impact of Covid 19.

I have asked a number of other people for advice on prices in both Mindanao and Luzon but nobody has been prepared to assist.

If there is anyone out there who would like to help me gain accurate data in these locations I would be happy to hear from them. My reporter is also hopeful of finding another source of price information in the Manila area.

In the meantime my advice is that slaughter cattle and retail beef prices remain similar to last month.

MLA reported that during November 5,300 head of cattle were exported from Australia to the Philippines which represents a significant increase compared to recent monthly averages. A very busy supermarket in General Santos City in southern Mindanao. Everyone is wearing mask with lots of Covid19 safety measure signage. Local slaughter cattle prices remained steady in local currency during December although the price of feeder cattle has risen sharply from 115-120 Baht to 130 – 134 Baht per kg live weight.

My agent suggests that the volume of smuggled feeder cattle from Myanmar border have reduced significantly as a result of a number of Covid 19 outbreaks in Thailand being traced back to incoming labour from Myanmar.

This really was a “wet” market as recently as 50 years ago when I was a student at Melbourne university.

Lots of meat and fish was presented in non-refrigerated stalls using ice to keep the products fresh.

Volumes traded were carefully managed to ensure that virtually everything was sold in the one day.

Today this location is still a vibrant retail market which is now converted into modern refrigerated displays.

The product is generally at the low end of the price ranges with plenty of bargains for thrifty shoppers.

When I was a student most of the traders here were of European origin while today the majority are from Asia. Lots of discounts to attract the price conscious buyer. Round/Knuckle on sale for AUD$12.99 in Melbourne while it is AUD$12.15 in the Pasar Modern wet market in BSD City, Jakarta. At the other end of the spectrum is Neil’s Meats specialising in dry aged Hereford product in the upmarket Melbourne suburb of Prahran.