Prices for slaughter cattle have firmed very slightly to produce an indicator price for August of Rp 40,500 per kg live weight. This number has been compounded by a weakening AUD to produce the much higher Aussie$ rate above.

August included the festival of Qurban (11th August) where Muslims sacrifice cattle (and sheep and goats) and distribute the meat to needy people in the community. The slight rise in price may be related to the fact that many domestic cattle are redirected to the Qurban festival slaughter which takes place over an intensive 3 day period leaving a potential shortage of local cattle to supply the normal domestic fresh beef requirements.

The surprise this month is the feeder cattle importation figure of about 75,000 head, a massive and unexpected volume given the NT supply problems and the modest slaughter prices.

This follows an updated import figure of 78,000 in July and over 60,000 in both May and June. The memory of the oversupply havoc created following the importation of 81,000 in October 2018 must still be very fresh in everyone’s minds.

The logic of the importers however is understandable as cattle supplies will soon be running out in Northern Australia and they need to stock up before supply dips and prices shoot upwards.

The feeder steer rate for Darwin was AUD$3.15 at the end of August, a significant rise from $2.95 to $3.00 in July. The majority of imports were sourced from Queensland through the port of Townsville where the drought has not impacted the entire herd as comprehensively as it has in the Northern Territory.

The other possible reason for this surge in imports is the potential loss of import permits. I had previously reported that importers were able to solve their import permit cancellations by establishing a new company and applying for a new permit. My initial understanding was that this would be a successful means of circumventing the cancellation penalty resulting from the failure to import the agreed number of breeding heifers. It now appears that my advice may not be correct so importers are stocking up as a contingency in case they suffer a 12 month loss of permits. Only time will tell how this scenario plays out but it sounds like a recipe for market disruption and chaos. This might also explain the government’s initiative to increase frozen beef supplies by adding Brazil to the list of approved importers.

Indian buffalo beef is well and truly back on the shelves with product observed in Bali, Jakarta and Kalimantan. Rumour has it that the first frozen Brazilian beef will arrive in Indonesia during October while I have heard that Indonesian government representatives have recently visited Brazil where they inspected Brazilian abattoirs and other facilities. The price of the Brazilian product will be critical in terms of its demand as it will have to compete with both Australian and Indian frozen imports.

Considering that frozen Indian buffalo, Australian lesser priced cuts, including offal and now Brazilian frozen boneless beef should provide a consistent and reliable supply of low end product to a very large proportion of the community that is constantly searching for the absolute cheapest product, the business case for breeding cattle locally to supply slaughter cattle for fresh beef supplies is all but destroyed.

The only remaining attractive market niche for domesticly produced cattle is for males for the annual Qurban festival. With most local cattle produced by small holders using a cut and carry system, the well understood costs of this production model are high with the end result being that the farmer achieves little more than buying himself a job through cutting the forage. This type of back-breaking work is becoming less and less attractive to younger farmers coming up through the ranks especially when there are less strenuous and more profitable enterprises to spend their time on. This Buffalo beef is at Transmart in Bali selling for Rp92,600 per kg or AUD$9.60. This very unattractive product is not cheap by any measure. In many other locations traders report that the retail price of frozen Indian product has gone down as much as 30 percent.

An abattoir in Java during Qurban where freshly slaughtered carcases are being divided into packages of mixed beef (usually a 1 kg combination of meat, bones, offal and fat) for distribution to low income families.

Slaughter steer prices have remained steady at Dong73,000 but import volumes have increased dramatically. The August import numbers rose to over 25,000 head while the average for 2018 was 16,800 and the average this calendar year to the end of July was 18,700 per month. The most likely cause of this massive increase in imports is the collapse of the pig herd following the African Swine Fever (ASF) epidemic which has resulted in the price of pigs almost doubling compared to their rates in 2017. Live pigs averaged around Dong30,000 per kg in 2017 climbing to Dong 45,000 towards the end of 2018 and are now Dong 50 to 60,000 per kg live weight. The decline in supply of local slaughter pigs has been exacerbated by the large numbers being exported into China. While I suspect this live and processed pork trade into China is not legal, the commercial incentive will be just too lucrative for authorities on either side of the border to resist.

The predicted price escalation following the outbreak of ASF has finally commenced with slaughter cattle rates in Beijing lifting 6% and in Shanghai 4.5% during August. Retail pork prices have made even greater monthly gains with an 18% increase in Beijing and a 21% rise in Shanghai. An average slaughter cattle rate of Y29.1 converts to AUD$6.06 per kg live, the first time the $6 barrier has been breached since this report commenced in 2014.

Given the incredibly difficult nature of ASF, it is unlikely that the pork supplies will return to anything like their previous levels for many years to come. Unless someone develops an effective vaccine, this disease will defeat the very best intentions to re-establish the domestic pig population for possibly a decade or more. With its S. E. Asian neighbours falling to the virus like dominos, a vaccine is the only effective option considering the capacity for rapid spread over very long distances and that smuggling is a way of life.

As reported in Beef Central recently, a large number of Chinese companies have invested in Australian live export companies and this has followed huge investments during the last 3-4 years in abattoirs and feedlots on the east coast of China in anticipation of the opening up of the live cattle import trade. I have been predicting the opening up of the live slaughter and feeder trade into China for all of this period and consistently been proved wrong. Fortunately for me I have only been investing my credibility while many Chinese companies and individuals have invested serious capital. At the risk of making yet another incorrect prediction I will once again suggest that this combination of rapidly rising beef and pork prices combined with the ongoing ASF catastrophe may well convince the bureaucrats to make the necessary changes to the health protocols to allow commercial trade to commence. China has been able to import massive additional quantities of processed beef and pork over the past year or so but these efforts have been unable to prevent the price spikes seen recently. More measures are needed to keep a lid on prices with live imports being a modest but useful addition to supplies of fresh local beef.

As reported in Beef Central, on August 22nd Vice Premier Hu Chunhua publicly expressed the very difficult position that ASF had created. Key comments included an expectation that the real situation may be worse that what has been officially reported and that the available international trade supply is incapable of filling the 10 million ton deficit in pork demand that is predicted later this year and early in 2020. Add a similar situation in the rest of S. E. Asia and the massive regional market disruption for pork and its alternative proteins is an absolute certainty with Aussie beef being a potential beneficiary.

The Peso rate for slaughter cattle has remained firm with the slight weakening of the AUD pushing the AUD$ rate for cattle just a little higher than last month. With the recent announcement of the discovery of ASF in pigs in the Manila region this rate is likely to experience some upward pressure when the retail pork supplies feel their first major reduction in about 6 months time. Dramatic declines in the supply of pork occurred roughly 6 months after the outbreak in both China and Vietnam and there is little reason to expect that the supply dynamics will be any different in the Philippines. The decline in pork supply may well be the trigger to convince potential Filipino cattle fatteners to once again commence significant levels of imports of live feeders from Australia. Another brave prediction. 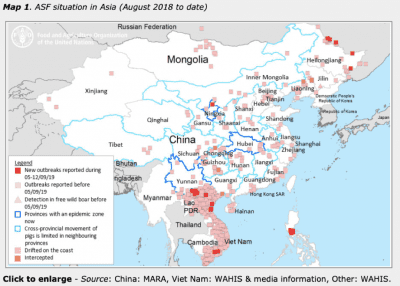 Map published by FAO on 12th September with outbreaks reported during the previous week in red.

Slaughter cattle prices in Baht are steady with the AUD$ increase above driven by a strengthening of the Thai currency. Thailand is either very lucky or has the best veterinary quarantine services in Asia (or both) as it remains free from ASF despite being surrounded on 3 sides by infected countries. Sadly, for Thai farmers it is almost impossible to prevent the movement of this disease across land borders so their chances of escaping its ravages are negligible. The Philippines couldn’t stop their infection travelling across a significant distance of ocean. Photo from the internet: Most Asian farmers have pigs in their back yard, a perfect medium for disease spread.

I visited New York for the very first time during August to meet my first grandchild.

While I was not being a proud grandfather I did a little investigating of the retail beef scene. I was particularly interested in the plant based meat substitutes and was astounded by their incredibly successful penetration into the US beef market.

I had always understood that Americans loved their burgers but until you see every menu in every level of food service including at least one burger and usually more, it is difficult to comprehend the enormous magnitude of their affair with the burger.

My two major observations were :

I will write a more detailed story in the near future about this very important aspect of the meat industry. Burger King has an Impossible Whopper which costs $1 more than the normal beef whopper. It is Delicious but I see no reason to pass up the cheaper beef whopper unless you are a vegetarian. Everywhere you go there are advertisements for plant based burgers. Even Dunkin Donuts has plant based burgers and breakfast sausage sandwich. Plant based mince in the local supermarket. A little more expensive than the real thing in the same display cabinet. and plant based “pork” sausages too. I took this photo in a “Whole Foods” supermarket which has a chain of 480 outlets across the US that has recently been purchased by Amazon. In their meat section they display these welfare rating categories with the label on each cut of meat in the cabinet having a rating from 1 to 5 to help the customer understand the welfare standards under which each item was grown. There was plenty of Aussie beef in this Amazon supermarket at pretty reasonable prices and showing a welfare rating of 4 (pasture centred).