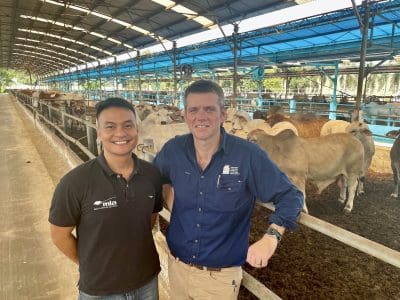 Mr Dawkins said the commercial partnerships Australian exporters maintain with customers across key cattle import regions in countries like Indonesia and Vietnam had given Australia a clear line of sight into the regional spread of Lumpy Skin Disease and Foot and Mouth Disease.

“Without the live trade, Australia just wouldn’t have the real-time biosecurity ‘eyes and ears’ across SE Asia which is proving so valuable in monitoring and managing the spread of these diseases,” Mr Dawkins said.

“I commend the important government-to-government work underway which is crucial, but there’s just no substitute for the buy-in we’ve got with livestock importers. The live trade is built on collaborative commercial partnerships and real-time communication to maintain animal health and welfare, all of which proving critical in the way the way the regional response to LSD and FMD is coordinated.”

Mr Dawkins is representing the NT Livestock Exporters’ Association and the NT Buffalo Industry Council this week in Jakarta, where he’s traveling with NT Government representatives including NT Minister for Agribusiness Paul Kirby and NT Cattlemen’s Association CEO Will Evans.

The NT delegation will look at strengthening biosecurity collaborations with Indonesia and will include a special roundtable meeting with industry, government on Thursday (December 8) to discuss livestock disease management and mitigation.

Mr Dawkins said recently announced Commonwealth funding of $1.2million to LiveCorp to support the rollout of FMD and LSD vaccines in Indonesia was recognition of the unique value of exporter-importer relationships in disease mitigation. He said without the live cattle trade’s reach into key parts of SE Asia, Australia’s ability to offer regional support and share in disease-management intelligence would be critically compromised.

He pointed to the spread of African Swine Fever through Asia in recent years which, by comparison, showed the difference for Australia between disease monitoring and mitigation in industries and import countries where we maintain commercial livestock partnerships, and where no such supply chain relationships exist.

“If we want to see how commercial cattle enterprises in Indonesia can manage ongoing threats of incursions of serious viral diseases, we can look to the success of our customers in Vietnam,” Mr Dawkins said.

“Feedlots in Vietnam have shown the way to manage outbreaks risks as they arise, to protect the wellbeing of the animals in their supply chain and continue to supply healthy, fresh beef to the market.”

“Australia and Indonesia have the luxury of sharing similar ‘splendid isolation’ mentalities in terms of biosecurity, whereas Vietnam is part of the greater Mekong region where contemplating disease management is shaped by the long-standing flow of livestock and other produce across national borders.”

Mr Dawkins said live export supply chains were already showing what a ‘back to business’ trade pathway would look like in the event that either LSD or FMD reached Australia.

“If an incursion was confirmed and Australia’s market access for livestock and meat was slammed shut, it’s increasingly clear that live cattle exports out of the north to SE Asia markets would emerge as a first major outlet for our animals. Live export would lead the market recovery, drawing on our partnerships with cattle importers going back decades to renegotiate protocols and vaccine rules to get healthy, disease-free animals back on export ships,” he said.

“Our experiences in countries like Vietnam give us a head-start in contemplating how live export trade can viably continue, or quickly resume, by working with our customers to manage disease risks through the proven biosecurity controls already practiced in livestock export supply chains.”

This week’s NT delegation to Jakarta will also meet with the group of Indonesian pastoral studies students who spent 10 weeks in the NT this year, as part of the Indonesia-Northern Territory Biosecurity Partnership. The visit also comes as reports emerge of Lumpy Skin Disease continuing to spread into East Java towards Bali.

Mr Dawkins said import demand would continue to be shaped by on-the-ground efforts in Indonesia to combat FMD and LSD, as well as the pace of post-Covid economic growth across SE Asian markets and the supply and price of Australian cattle.

“After the disruptions of the pandemic, we are hearing reports about new consumer trends that have out emerged out the lockdown period. These in-country visits are very important, because Australian producers and exporters are keen to understand how the live cattle trade continues to play a pivotal long-term role in the market which is adaptable to changing consumer habits and preferences,” he said. “It’s clear the demand for quality fresh beef from Australian cattle is still high and will remain a trusted and sought-after source of protein for a significant number of consumers across SE Asia.

“We can tell a lot about the underlying strength of our trade relationships by seeing how they are a surviving during periods of low volumes, difficult trading conditions and disease threats.

“Trading conditions will improve, so the resilience in markets like Indonesia and Vietnam amid quite extraordinary adversity in the past two years indicates the live trade will continue to be an important market for Australian cattle producers for many, many years to come.”