Wetter August to November likely for much of Australia Rainfall outlook for September to November 2020.

The Bureau of Meteorology is predicting a wetter than average period across Australia from now until the end of November, as well as an earlier than usual onset of the northern rainfall season. 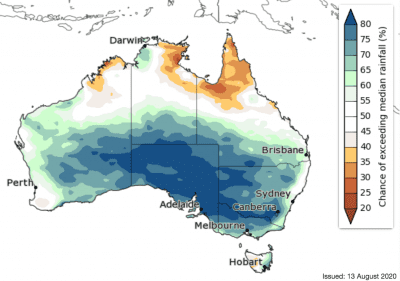 Outlook for the last two weeks of August. Click on images to enlarge.

The Bureau says the next fortnight (17 to 30 August) is likely to be wetter than average for most of Australia, with a greater than 65 percent chance across most of the southern half of the mainland.

However, chances are close to average in south-west WA, Tasmania and much of the northern tropics.

The outlook favours a drier than average fortnight (greater than 60 percent chance) for the far south-west of WA and some areas of the tropics, mostly around the Gulf of Carpentaria. 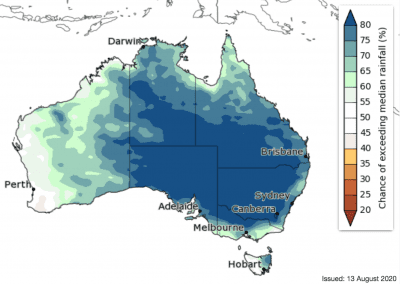 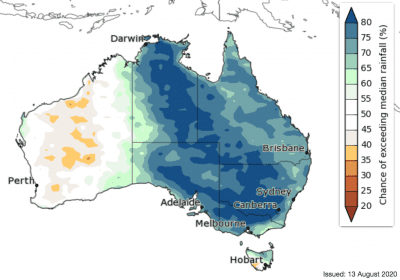 Early rainfall onset likely for most of northern Australia The chance of the first rains for northern Australia arriving early in 2020–21 is higher than average over most of northern Australia with the exception of parts of Western Australia (WA) and the far northern Cape York Peninsula. The highest likelihood of early rainfall onset is across inland and central coastal parts of Queensland, and the southern Northern Territory.

The northern rainfall onset outlook gives an indication of whether the first significant rains after 1 September are likely to be earlier or later than average. View normal onset dates here.

The Bureau will issue the next fortnighly Northern Rainfall Onset update at the end of August.