JAPAN’S preferential trade agreements with Australia, the European Union, Canada, New Zealand, Mexico and Chile meant that the competitive terrain in Japan for US red meat had gotten steeper, a US agricultural forum was told last week. 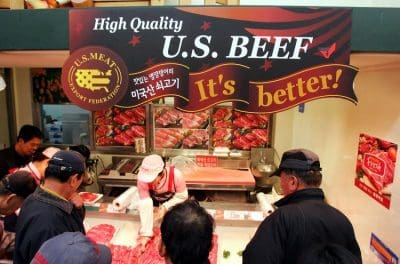 The importance of Japan as a trading partner for US agriculture was the focus of a panel discussion at the USDA Agricultural Outlook Forum in Virginia. USMEF economist Erin Borror said Japan was the leading value destination for US beef, with 2018 exports expected to reach US$2.1 billion, when year-end data is available.

But she also extended a caution about the US’s trade disadvantage in Japan against beef export competitors like Australia. “This situation will worsen unless the United States secures similar access terms with Japan,” she said.

Japan accounted for one-quarter of this total, or $82.75 per head.

She also explained that beef and pork made up a significant portion of overall US agricultural exports to Japan. The projected US$3.92 billion in combined beef/pork product exports for 2018 represented about 30pc of the $13 billion in total US ag exports to Japan, second only to grains and feeds.

Japan’s red meat consumption is likely to expand at a faster rate once the benefits of lower import duties are passed along to consumers, Ms Borror said.

“In South Korea, for example, the tariff rate on US beef has dropped by more than half since 2012 under the Korea/US Free Trade Agreement, and US beef enjoys a tariff rate advantage over its competitors. Most pork from the US and other major suppliers enters Korea at zero duty. Red meat is now more affordable and accessible for Korean consumers, who have responded enthusiastically, with per capita consumption setting new records,” she said.

A similar development in Japan would only benefit the US beef and pork industries if they were on a level playing field with export competitors.

Without a US-Japan trade agreement, potential losses for the US meat industry were substantial, she said.

“Unless the US and Japan can quickly reach a trade agreement, lost opportunities will mount as Japanese companies seek more value-added, further processed products from other suppliers.”

“Decisions that are being made today will transform the business and without clear indications that the US and Japan will reach an agreement, the US industry is likely to suffer permanent losses in market share and related investment.”

“Japan is irreplaceable as a trading partner, given its demand for high-value chilled meat, and it is seen as an increasingly important market for value-added products. At a time when US companies are looking to produce more value-added and branded products, the industry cannot afford to miss these opportunities in Japan.”

“Exports to Japan are estimated to directly support more than four percent of the jobs in the meat packing and processing industry. Absent a trade agreement with Japan, an annual cost of $5.2 billion in direct economic losses to other businesses and industries will result in the top 15 meat packing and processing states. Over the next 10 years, an estimated 23,600 jobs outside the meat industry would be lost in those 15 states,” she said.

Ms Borror also detailed the impact of ongoing trade disputes on US red meat exports, including imposition of retaliatory duties on US pork by China and Mexico, and China’s increased rate of duty for US beef last year. Canada also imposed retaliatory duties on prepared beef products imported from the US.

“Retaliation has weighed less heavily on US beef exports, which were record-large in 2018 and surged by more than $1 billion over the previous year,” she said.