The Warragundi Aggregation, on the NSW Central Tablelands, was offered on a walk-in walk-out basis by South Korean solar manufacturer, the Hanwha Group, after just 18 months of ownership.

One of the largest agribusiness enterprises in the Mudgee region of NSW has changed hands for the second time in less than three years for more than $25 million.

The Warragundi Aggregation, on the NSW Central Tablelands, was offered on a walk-in walk-out basis by South Korean solar manufacturer, the Hanwha Group, after just 18 months of ownership.

The deal included 2400 Angus cattle and 2600 sheep, irrigation and a significant list of plant and machinery.

Selling agent Richard Gemmell from Elders was unable to disclose the buyer or the price paid, but said the purchaser was an Australian entity with other agricultural interests.

In September last year, the Hanwha Group cited a change of direction with its agricultural investment in Australia and took the renowned grazing and mixed farming aggregation to the market via an expressions of interest campaign.

During its ownership, the South Korean corporation operated the 5800ha holding as an intensive agricultural producer of cattle, sheep, wool, prime lambs, cropping and fodder.

Situated on the banks of the Cudgegong River at Goolma, the Warragundi Aggregation is made up of three main holdings, within which sit nine aggregated farms, but operated as a single agribusiness enterprise.

The 2020ha of improved and natural grazing (together with the irrigated and dryland fodder production) supporta 26,000 DSE.

Twelve months ago, Roy Chisholm (a former owner of Napperby Station) offered Oolloo Farm, together with the nearby 2144ha Territory Grape Farm, on a walk-in walk-out basis via an expressions of interest campaign.

The area is considered one of the most controlled growing environments of Australia. With plenty of sunshine and warmth the growing seasons are longer, growing time is shorter, controlled watering, minimal weed and pest control is required and biosecurity is optimum.

The 1047ha Oolloo Farm, with a ground water extraction licence of 1000 megalitres, has 154ha under six newly installed pivots that allow the operator to monitor each remotely.

“Fodder production has been underway for just under five years. Combined, the two properties produce about 15,000 tonnes of fodder a year supplying Northern Territory pastoral properties extending South of Alice Springs and north to the Katherine region,” he said.

The 2144ha Territory Grape Farm, which has been withdrawn from the market for the time being, boasts a 2000 megalitre ground water extraction licence with 60ha under two pivots.

Olivia Thompson from Nutrien Harcourts handled the sale and marketing of Oolloo Farm. 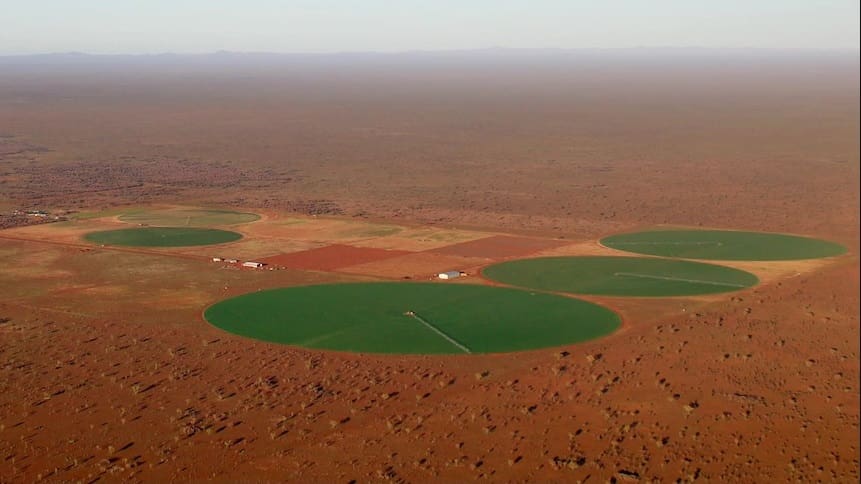 The James family from Hidden Valley Station in the Northern Territory has paid $7.2 million for Sandalwood Station in Queensland’s northwest.

The breeding, backgrounding and fattening property was auctioned bare of stock and plant by David Woodhouse from Nutrien Harcourts, who said the sale was in line with expectations and represented fair value for both the purchaser and the vendor.

Located at Stamford, 90km south of Hughenden, the 16,060ha block had been destocked since mid-December, with the incoming purchaser having the added benefit of 1100ha of usable stock route.

The historical carrying capacity of Sandalwood is 2100 adult equivalents.

Water on Sandalwood is sourced from three bores, 20 tanks and 48 troughs with the Rockwood, Ashantee and Sandalwood Creeks providing numerous seasonal and semi-permanent waterholes.

The owner, who is consolidating their operations into one geographic area, has undertaken an extensive capital works program including more than 120km of new fencing and recently refurbishing a further 10km.

The James family from Hidden Valley Station in the Northern Territory has paid $7.2 million for Sandalwood Station in Queensland’s northwest.

The 20,858ha property is a mixture of flat to slightly undulating, well-shaded Mitchell and Flinders grass downs, rated to carry 2500 adult equivalents.

Selling agent Brett Christie from TopX said Eurolie was an exceptionally well laid out operation with water a standout feature.

There are five dams and four artesian bores that feed a complex pipeline system supplying numerous poly tanks and cement troughs to ensure water is delivered to all parts or the property.

Located 61km north west of Coonamble and 230km from Dubbo, the 5685ha feature black self-mulching soils and 1740ha of cultivation, making them suitable for breeding or fattening cattle and/or sheep, as well as a prime hard wheat producing enterprise. The 20,858ha Eurolie is a mixture of flat to slightly undulating, well-shaded Mitchell and Flinders grass downs, rated to carry 2500 adult equivalents.

The Imsirovic family from Queensland’s Central Highlands has paid $4.5 million (including some plant) for Barcaldine’s Culburnie.

The 8255ha holding, suited to both cattle and sheep, is estimated to carry 1000 adult equivalents.

The country comprises a mixture of flat to gently undulating Mitchell and Flinders grass downs, with soft native grass.

When Culburnie was listed with TopX in February, Brett Christie said the well-located property had enormous production potential given the amount of water and the exclusion fencing. The incoming owners plan to develop the backgrounding country and invest in water infrastructure.

“Western backgrounding country is generating strong inquiry especially from Central Queensland producers due to strong local prices. They are looking at other options to expand their existing holdings,” he said.

The Imsirovic family from Queensland’s Central Highlands has paid $4.5 million (including some plant) for Barcaldine’s Culburnie.

Langidoon and Metford purchased for conservation

The purchase is the second largest private land acquisition for national parks in the last 10 years.

At the time, Environment Minister Matt Kean said Narriearra, which stretches across outback channel country and parts of the floodplain of the Bulloo River, includes wetlands listed as nationally significant and is home to at least 27 threatened species.

The Treloar and Metford creeks deliver to the expansive flood-out, lake and swamp catchment zones.

In 2019, the 60,573ha aggregation was offered by Andrew and Kathy Wall as a whole or in two independent and contingent offerings after 19 years of ownership.

“This new Park will be an important refuge for wildlife including at least 14 threatened animal species,” he said. The Dunsdon family from Cunnamulla has secured the fully-exclusion fenced Yamma in Queensland’s south west for around $7.2 million.

The 19,400ha block is located 90km south east of Bollon, with water supplied by a capped artesian bore and large stock dams.

Phillip Kelly from Colliers Agribusiness, who handled the sale, was unable to disclose the price, but it had been listed for $371/ha.

The expansive open buffel grass country has received good rain and is suitable for breeding cattle, sheep and goats or for wool production.

For the past 26 years, it has been owned by Tim and Mary Perrottet who are now consolidating their business. The 19,400ha Yamma is located 90km south east of Bollon, with water supplied by a capped artesian bore and large stock dams.

Cunnamulla district sheep and cattle breeding property Lulworth has sold to near neighbours for $2.05 million, or around $103/ha ($42/ac) bare.

The mostly soft mulga country property covers19,740ha spread across three titles and has historically been utilised for beef cattle breeding, sheep and wool production. The new owners plan to continue with sheep and cattle, and there is a prospect for a carbon project.

Vendors the Bolam family, who have a considerable aggregation in the local region as well as in Central western NSW, were selling Lulworth as part of family succession. They ran around 600 breeders on the property.

There is an exclusion fence project which has been started, but the project is not part of a larger cluster fencing project. Water supply comes from free-flowing bores and a large lake system.

Marketing agent Phillip Kelly from Colliers said good soft mulga country properties like Lulworth were increasingly coming under the scrutiny of carbon interests, which have helped ‘set a price’ for suitable country. However since the end of the drought, there had also been a lot of inquiry from lotfeeders and traditional graziers looking at cheaper, safe country further west to breed and background on.

Phillip Kelly from Colliers and Nutrien Cunnamulla were agents in conjunction. Cunnamulla district sheep and cattle breeding property Lulworth has sold to near neighbours for $2.05m, or around $103/ha bare.