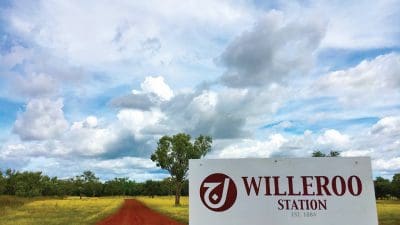 The Indonesian owners of Willeroo Station on the Victoria Highway west of Katherine, NT, have confirmed they intend to seek expressions of interest in the purchase of the 170,000ha property from qualified interested parties.

The confirmation was received from Agri International Pty Ltd, a related company of one of Great Giant Pineapple, one of the major cattle importing and lot feeding operations in Sumatra, Indonesia.

GGL has been importing Australian live cattle for almost thirty years, to supply their two Indonesian feedlots with a capacity of over 35,000 head.

Director of Agri International, Josep Lay, was eager to point out that the sale of Willeroo was in no way a sign that the company would not continue to be involved in the Northern Australian cattle industry as a principal.

Willeroo Station, is primarily a breeding property and the company has spent more than $4 million in extensively improving and upgrading the property since purchasing it from the Sultan of Brunei in August 2014.

Mr Lay said in a statement that given the numbers of cattle that Agri International’s related company has historically imported, and hopes to in the future, providing prices are affordable for them, then a breeding property of Willeroo’ s scale does not produce the numbers desired.

The alternative is to increase breeder production or increase the existing backgrounding operations which to date has been done on lease and agistment properties.

Mr Lay said the trials in 2016 of backgrounding feeder cattle and the current pregnant heifer programs on external properties would be expanded and even other potential locations across Northern Australia would be investigated.

The breeder program was commenced well prior to when the Indonesian government’s Breeder quotas were introduced due to the significant farmer breeder program undertaken by the company in Indonesia.

This program in Australia was to support the Indonesian program over the last three years. The feeder background program focuses on supplementing supply during the wet season.

Mr Lay said Willeroo Station has been a fantastic opportunity for the principals to understand and participate in the Northern Australian Cattle Industry.

“Agri International and the parent company is committed to its continuing involvement in the industry and sees the focus on backgrounding, and the pregnant heifer program, as a better use of our resources,” he said.

Mr Lay said he also wished to acknowledge the fine service of Management and staff on the property during their tenure.

Willeroo will be offered for sale with an expected 21,000 head of branded cattle and a full working plant.

The statement said Willeroo cattle have a fine reputation in the NT and are horse-mustered, high grade, principally grey Brahmans.

Mr Lay advised that further details on the property sale would be available from their appointed agent, Peter Watkins who has worked and been involved in the Real Estate industry in the NT for more than 25 years.