Cattle producers in Brazil and Chile will be the first in the world to gain access to a new methane-reducing feed additive which has also been successfully trialled in Australia.

Royal DSM has confirmed overnight it has received full regulatory approval from Brazilian and Chilean authorities to commercialise its feed additive Bovaer for beef and dairy cattle in both countries, and also for sheep and goat production. 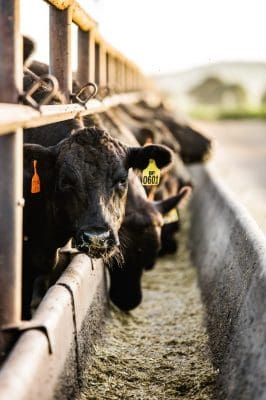 The same product has performed well in trials in Australia in recent months, reducing methane emissions in beef cattle by up to 90 percent, as reported by Beef Central in this article in August.

Mark van Nieuwland From DSM told Beef Central the company is actively working with the Australian Federal Department of Industry, Science, Energy and Resourcesas as part of its roadmap for reducing enteric emissions from livestock.

Royal DSM said the first market authorisations allowing commercial use of its novel methane-reducing feed additive for ruminants in Brazil and Chile marked “a significant milestone” for the company.

“Intense collaboration among scientists and external partners across the globe” had made Bovaer a reality, the company said.

“That endeavour, known as Project Clean Cow, encompassed over 10 years, 45 on-farm trials in 13 countries across 4 continents, and more than 48 peer-reviewed studies published in independent scientific journals.

“Following the first regulatory approvals, DSM can now start introducing its breakthrough innovation to the market.”

Mauricio Adade, president DSM Latin America, said he was excited Latin America was the first continent to get approvals for Bovaer.

“We are delighted that the Brazilian and Chilean regulatory authorities evaluated Bovaer carefully and efficiently at the same time and included all ruminants and both beef and dairy in their approval.

A beef trial with Bovaer at Sao Paolo State University (UNESP) in Brazil conducted in 2016- 2017 showed enteric methane emission reductions up to 55 percent.

“(This) highlights the potential of Bovaer for radically more sustainable cattle farming in Latin America. We are looking forward to collaborating with the Brazilian and Chilean farming sectors to further lower their carbon footprint.”

Mr van Nieuwland, Program Director at DSM, said the recent IPCC’s climate change report was “a massive wake-up call for us all about the irreversible power of global warming”.

“In it, the IPCC (Intergovernmental Panel on Climate Change) also stated that a rapid reduction of methane emissions could reduce the spread of global warming in the near term and have a positive effect on air quality.

“We know the agricultural and livestock sectors recognise this opportunity for change and are eager to act.

“We are very excited to now gradually scale up our commercialisation activities and prepare our supply chain with a special focus on Brazil and Chile and finalise new business models to bring this unique product to market, while recognizing the farmers for their efforts in reducing methane emissions.”

Marina Grossi, President of the Brazilian Business Council for Sustainable Development (CEBDS) said DSM´s initiative to reduce the cattle herd´s methane emissions through feed was “a corporate solution aligned with the challenges we face ahead and is also an effective way to transition towards a net zero economy”.

A Royal DSM statement said just a quarter teaspoon of Bovaer per cow per day consistently reduces enteric methane emission by approximately 30 percent for dairy cows and even higher percentages (up to 90 percent) for beef cows.

It described the product as “the most extensively studied and scientifically proven solution to the challenge of burped methane to date”.

“Upon feeding, It takes effect immediately.

“After suppressing methane production in the stomach, it is broken down into compounds already naturally present in the cow’s stomach. “

Mr van Nieuwland told Beef Central that Bovaer is made by combining two ingredients: nitrate and a bio-based alcohol.

After suppressing methane production in the stomach, Bovaer is broken down into the same natural compounds again, which are already present and processed by the cow’s normal digestive and metabolic processes.

The product was developed specifically developed for the reduction of methane from ruminants.

Asked if the product has USDA approval the company said the US FDA process has been initiated.

“Registrations are ongoing in a number of export markets globally, eg in the EU we anticipate market approval later this year.

“The registrations in Chile and Brazil are first in a series. In those markets they have reviewed the full and extensive registration dossier provided covering topics like safety and efficacy, and have provided full approval for product use.”