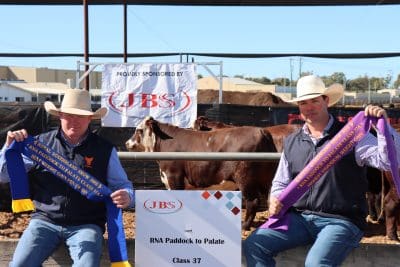 Kris Elliott and Brett Ellem from Yulgilbar with the Santa Hereford cross champions of the 100 day pen of six weight gain competition at Beef City, which averaged 3.262kg.

Yulgilbar general manager Brett Ellem was on hand to accept three major awards on behalf of the Baryulgil, NSW based Santa Gertrudis stud and commercial cattle company, including overall pen of six in Class 37A (100 day) with their Santa Hereford cross steers recording an average daily weight gain across the pen of 3.262kg.

They also won the highest individual weight gain for Class 37A with an ADG of 3.59kg.

Santa Gertrudis steers from Yulgilbar also won the overall pen of six in Class 38A (70 Day) with an ADG of 3.186kg. 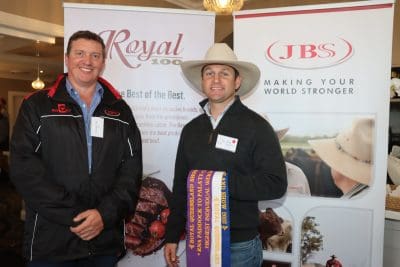 Charolais and Charolais Angus cross entries from Palgrove Pastoral Company were also major winners, winning the overall pen of six in Class 40A (100 Day HGP Free) with a Charolais pen that produced an ADG 2.557kg.

Two steers in the winning pen also recorded the highest individual weight gains of the HGP free section of 2.91kg and 2.8kg.

Second place in class 37 (100 day) was won by a pen of Charolais X Angus steers exhibited by Kel and Greg Kelly’s Juandah Grazing stud and commercial cattle operation based at Gulugaba, which produced an ADG of 2.998.

In second place in Class 38 (70 day) was a pen of Angus X Ultrablack steers from the Crombie family’s Aurelian Pastoral Co with an ADG of 3.160. 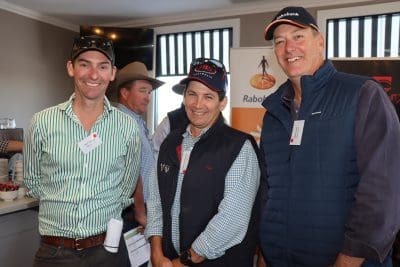 Third place in class 38 (70 day) was claimed by Russell Pastoral Operations Pty Ltd with a pen of Angus X steers which recorded an average ADG of 3.071.

In Class 40 (HGP free 100 day) Angus steers from Ben and Wendy Mayne’s Texas Angus took second place in the class with an ADG of 2.398.

Shorthorn steers from G Morgan & Co took third place with an ADG of 2.380.

Entries from McIntyre Agriculture at St George dominated the weight gain section of the Wagyu Challenge, the results of which were announced at Smithfield Cattle Co’s Sapphire Feedlot on Monday.

F1 pens from McIntyre Agriculture took first and second place with ADGs of 1.108kg and 1.060kg, ahead of Sefton Grazing in third place with ADG of 1.004.

The results of the weight gain section, the first of three phases of the competition, were announced at an RNA event at the Royal Hotel in Toowoomba today, which also included a tour of JBS’ Beef City feedlot where the competition cattle have been on feed.

The event is Australia’s richest beef competition of its kind, with almost $54,000 in prize money.

A total of 756 head were involved in this year’s competition, which also includes the Wagyu entries.