AMERICAN Wagyu breeder Brian Stamps knows good genetics when he sees them – whether in cattle or as it turns out, in working dogs.

The 44 year-old Oklahoma-based Wagyu breeder this week paid a world record price of £18,900, or about A$37,000, for a 2.5 year-old black and white collie bitch, Megan, from Northumberland shepherdess Emma Gray at the latest Skipton Auction Mart sale in the UK. 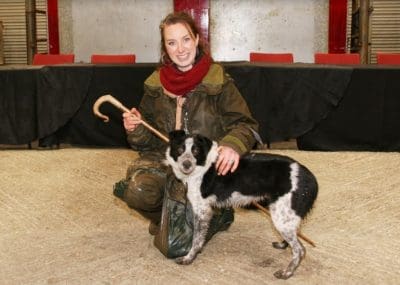 In May last year, Brian Stamps also paid an Australian all-breeds female cattle record price for the unjoined Wagyu heifer, Mayura N1229 (AI), at Adelaide’s Elite Wagyu National sale. Mayura N1229, along with other genetic elite females and two bulls are run at Camperdown in Victoria as part of Mr Stamps’ Australian herd, aimed at collecting semen and embryos for use in his US herd.

Mr Stamps’ company Stamps Brothers Oil and Gas specialises in acquiring royalty and mineral interests and he maintains a 100 per cent full-blood Wagyu cattle on 2000 acres at Tuttle in Grady County, Oklahoma.

Robin Moule of Moule Media said the July, 2017-born Megan has some of the best bloodlines available, being related on both sides to many top-performing British trial dogs, including International Sheepdog Society’s Supreme and International Champions.

She is by two times International Champion, Roy, from Welsh breeder Ross Games, of Talgarth in southern Powys, out of County Durham-based Lynne Moreland’s Maggie, who is a litter sister to Littledale handler Ricky Hutchinson’s International Supreme winner Jock.

Jock is a son of the same handler’s celebrated Sweep, the English National Champion, International Reserve Supreme Champion and International Brace Champion, who also finished third in the 2014 World Sheep Dog Trials and has bred numerous trials winners around the globe.

But it was Megan’s working style on cattle seen in a social media post by Emma Gray that caught Mr Stamps’ attention (click on image below to view Youtube video).

“On her performance Megan had a flow with the cattle that commanded presence, you could see she was thinking not just biting them at the heels and chewing them like a rawhide strip.

“I liked the way she moved them with seamless easy effort.”

Mr Stamps said he has followed the Skipton sale for several years as he used to run Border Collies in Oklahoma.

“I figured it would be the best place available to secure a dog which would meet our needs.

“I used to trial 20 years ago, but do not have time to with our operations, though Megan is going to run some trials here and then retire on our ranch.”

Breeding from Megan is also on the agenda, including a visit to a proven work and trials dog with connections to twice World Sheep Dog Trials champion and three-time International Sheepdog Society Supreme Champion, Welshman Aled Owen.

“We do have one litter plan this fall with Groesfaen Jock, a son of Aled Owen’s Mac by a daughter of Aled’s Bob, then maybe another one to a real high roller as well in another two to three years. “That will be it,” he said.

“We did not buy her to be a puppy factory, but rather a working dog for our ranch.”

Mr Stamps said he has seen kelpies work cattle in Australia and the United States and considered using them.

“Any well trained dog be it herding, mustering, driving hunting or rescue is a true gift.

But Megan’s price also shattered the previous all-time record price for a sheep dog at an official sale of 14,100 guineas (£14,805), also established at Skipton, in 2016 by Northern Ireland’s Padraig Doherty, of Ardagh Sheepdogs in County Donegal.

On a day of incessant rain, which made conditions on the trials field extremely difficult, notably for handlers, Emma’s performance demonstrating Megan before the Skipton auction was a highlight.

“This is so much better than I have ever done. It’s good that people value sheep dogs these days,” Emma said after the sale.

“They are getting the recognition they deserve.”

Skipton Auction Mart’s general manager and auctioneer Jeremy Eaton, who sold Megan, said it was an unbelievable sale given the conditions on the day and in the run-up.