ONE of the patriarchs of the Australian meat processing industry, Barry Hart, passed away last Tuesday, aged 96. 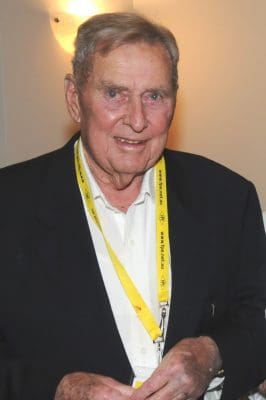 With his characteristic quiet dignity, he was regarded as a true gentleman, and provided wise counsel for many younger stakeholders coming through the industry over the past half-century.

The Hart family’s wholesale meat business started in Brisbane in 1939. Barry was sent to Brisbane by his father, Frank, to learn the trade a week after finishing his leaving certificate at Sydney Boys’ High School. Some of the company’s early production went into the war effort via the British Ministry of Food’s Bulk Beef Purchase Plan.

The business shifted to Warwick in 1945, having acquired the Warwick Bacon Company processing business with a partner, while continuing as wholesalers through the meat hall at the Government-owned Brisbane abattoir at Cannon Hill.

Barry was joined by his brothers Bob and Frank at the end of World War II, and later still by younger brothers Harry and Jack. The family bought-out their partner in Warwick Bacon in 1959, author Steve Martyn recorded in his meat processing industry history book, “World on a Plate.”

In the earlier part of his career, Barry was in charge of John Dee’s livestock procurement, and became a well-known identity as a vigorous competitor for cattle at Brisbane’s Cannon Hill Saleyards. Barry and many of his contemporaries from the Cannon Hill days continued to meet for six-monthly ‘reunions’ until recent times.

The expanding John Dee business diversified into domestic retail butchery, with eight outlets on Brisbane’s southside at one time. During the Beef Slump era from 1974, the shops were selling whole chucks for 29c/kg and blades for 39c/kg. The retail margins became so low that John Dee sold out of its retail venture in the 1980s, but continued to expand into beef export, especially grainfed,  supported by lotfeeding at the company’s Yarranbrook feedlot.

Over time, Barry shifted his focus from livestock procurement into meat sales, which proved his great forte. He was an early pioneer of domestic carton meat sales (instead of bone-in carcase meat) through the Brisbane Meat Hall.

When the emerging Japanese export market shut-down unexpectedly in 1973, it left the quota-controlled US market as Australian beef’s only export lifeline. With exports to other diversified markets earning vital US quota access, Barry visited many non-traditional export markets across Asia, Europe and the Middle East in the 1970s, seeking diversified sales to earn US quota. Iran was one such success story.

He calculated that he had visited almost 50 customer counties over 50 years, exploring new opportunities to market Australian beef offshore. Many of those importing countries continue to trade in Australian beef today.

Barry is well-remembered in processing circles for leading a 1983 processor challenge against livestock agents over unfair livestock settlement terms. Processors felt that the terms effectively meant that they were financing livestock agents’ operations, and were adding unnecessary cost to every beast slaughtered. Queensland processors under Barry’s guidance raised $1.25 million for legal expenses, but stood to lose a lot more as a free source of finance to stock agents. The matter was finally decided in the Trade Practises Commission in 1988, in processors’ favour.

He was one of the early recipients of the meat processing industry’s Distinguished Australian of the Year award, presented 2000.

A private service will be held.