RAPID increases in demand for chilled premium high-end cuts in the Middle East region present an opportunity for Australian beef and lamb, but trade was not without its challenges, MLA’s Global Meat Markets forum in Canberra was told yesterday. 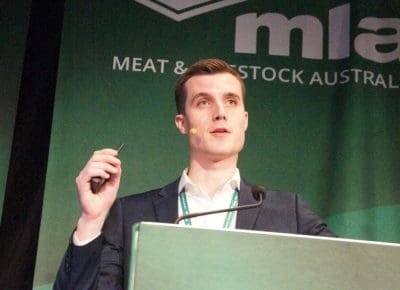 However regulatory requirements around shelf-life in chilled product, and unfair and lingering perceptions of the region as a dumping ground for commodity-type product needed to change, he said.

The global markets forum was the opening event surrounding MLA’s 2018 annual general meeting being held today in Canberra, to be followed by a two-day digital forum and field tour later this week.

Mr Robinson said various exporting countries had been suspended from supply to the Middle East at different times, including Brazil, ruled out for two years up to 2016 and the US, which had only just returned this year after a lengthy absence.

“Those suspensions happened for a variety of reasons, but they ultimately came down to traceability,” he said.

“I imagine there are a lot of discussions among Australian producers about the need to jump through certain hoops in areas like traceability, but your programs are paying dividends for you in the Middle East.”

“Australian beef and lamb has never been banned, and that’s a very strong selling point for exporters pitching meat into the region, because from my side of things, when we are dealing with customers who are demanding that continuity and security of supply for their restaurants and retail outlets, they want to know that a supply relationship is not going to be cut off after six months,” Mr Robinson said.

There was an underlying trend towards chilled product in imported meat entering the Middle East region. For the manufacturing side of the industry, that movement was being driven by the saving on duties, with chilled product attracting five percent less duty than frozen meat.

But the other side of the coin was consumer trends, with the increase being seen in chilled premium cuts being driven by demand.

Mr Robinson said consumer habits and customs in the Middle East differed from many other regions.

“Food forms a core centrepiece for families’ activity every evening, and that drives a lot of the market. Food is not something that is just consumed as a matter of course – it’s the central focus in family life in the evening. Because of that, the net spend and frequency with which people in the Middle East eat out is a lot greater than in other parts of the world.”

An increasingly well-educated and well-travelled younger population was also helping driven demand for chilled beef. In the large Saudi market, young people were travelling abroad more frequently, often for education, and were being influenced by social media.

“They’re being subjected to brands and products outside of their region that they want to consume when they come home – and the food industry is responding, in giving them what they want,” Mr Robinson said.

“If the high frequency of eating out is coupled with the types of cuisines they are eating – European, North American – you can start to build a picture as to why food items such as premium chilled steaks are on the rise,” he said.

“There’s been good growth across the board in beef consumption – year in, year out. But what happens is that trends come and go within the region. The latest is fast casual dining – something develops in the US or Europe, comes to the region, and people want to try it – because food is such a core part of what they do. Time will tell whether fast casual dining is something that will stick around long term, but for now, it’s doing very well, and pushing that growing trend in premium chilled cuts.” The company for which Mr Robinson works, Premier Foods, specialises in Halal value-added food products servicing the food service hotel and restaurant market and the 35 leading brands within it.

He said two years ago, Premier’s meat procurement policy had been price-driven, to the detriment of quality, consistency and provenance.

“We set about trying to change that, building direct relationships with suppliers, avoiding going through traders, and finding suppliers around the world that were ready to meet the challenge that we had in sourcing the right material.”

“We looked at Brazil, New Zealand and Australia, and Australia (through JBS’s Matt Dorney) was the first to step up to the plate, prepared to make that investment in time that is critical to get things going in the Middle East.”

“We started to identify cutting specifications for primals that we could then match with carcase grades, to deliver the right quality raw material for us to process into finished products.”

He used an example of low quality ‘commodity-bought’ navel-end briskets, used to manufacture beef bacon (a popular item in the Middle East, given that the Muslim dominant population does not eat pork). These were replaced with Australian high quality briskets, offering greater consistency in shape, size, form, meat colour and fat colour.

“That’s important because it translates into the finished product we’re producing. Consistency is key. In the food service market, even to the detriment of quality, you have to have consistency. Why? Because as a customer, you should be able to go to any outlet of a brand, and receive the same quality each time.”

“If you can’t deliver that, consumers start going to look for new suppliers. Not only are we winning new business, but we are actually retaining business a lot better by having these new specifications in place, building these relationships with suppliers who value consistency of supply.”

Mr Robinson said Premier Food Industries had elected to get into portion control steak cutting for a number of reasons. “We already had the equipment within our existing facilities; but the main challenge was identifying the right supply.

“All of the casual dining and quick service restaurant chains that we deal with came with technical specifications from the US and Europe. They wanted to know they were going to get that good, consistent, secure quality supply.”

“Once we determined what those customers were looking for in terms of portion control steaks, we looked at all the potential suppliers, and again, it was the Australian market that stepped up to the plate.”

Premier has now launched a two-tiered portion control steak range, with a grainfed and upper tier Angus product, going into multiple casual dining chains across the Middle East, and looking to grow volume.

“We’re buoyed by the underlying trend in continuous growth in the food service industry in the region, and the ever-increasing demand that is coming from the hotel industry. That’s especially seen in the United Arab Emirates, but also increasingly in Saudi, where they expect to open a lot of four and five star hotels in coming years,” Mr Robinson said (see graph image above).

“There are lots of opportunities in high-value food service for quality beef across the Middle East, and it really plays to the Australian market’s strength.”

From the supply side, Mr Robinson said there were still some ‘badly-held’ perceptions across the region.

“There’s this belief that the Middle East is a little backward; not fully developed in their tastes; and only a region in which you can sell commodity cuts, and a bit of a dumping ground,” he said.

“I’ve come across so many salesmen who hold that view, and that’s where they fall down. Saudi is an ever-developing market – it’s younger people are as well educated as people in Australia; they are travelling extensively to the US and Europe, and they are bringing those expectations back to the region. The suppliers who do not react to this will be the people who miss out.”

The second perception challenge was in the buy-side of the business, where the concept of ‘total cost’ was completely overlooked in the region.

“Using the navel end brisket example mentioned earlier, the commodity-type briskets we previously purchased were coming into the business at a cheaper price point. When we moved to the new specification from Australia, yes I was paying a lot more for them, up front, on a price per kilo basis. But net, I was paying less, because of reduced butchery cost in-house, increase in yield, and the reduction in customer complaints and returns. The cost of production from that product was lower than buying the cheaper ‘commodity’ product in the first instance.”

“This is a concept that people completely miss out on – not just in the Middle East region, but more widely across the industry.”

Mr Robinson briefly touched on technical barriers to trade into the Middle East region, particularly shelf-life challenges due to most of the region’s countries imposing a limit of 70 days on imported chilled product. 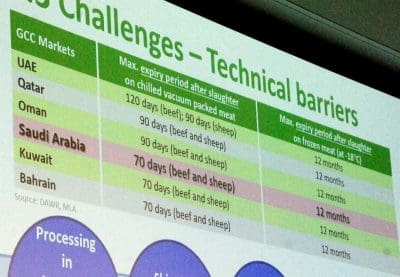 “Australia has a market-leading product in the Middle East – a product you can get 120 days shelf-life on as a vacuum-packed chilled primal in most other countries around the world.

“But I can’t access that. In the region, only the United Arab Emirates has 120 days shelf life, while Saudi (and other gulf states, see image) insists on 70 days.

“That’s an issue, because the amount of time it leaves me to deal with that product after sea shipment, before expiry date, is far too small to give me a variety of options. By the time it lands with me, I have just 2-3 weeks to portion, pack and handle that product.”

The only other option was to freeze it down, and offer it to customers as a frozen product.

“With the growing trend towards chilled in the Middle East, it would mean I miss out,” Mr Robinson said.

“The UAE will have an unfair competitive advantage, and ultimately Australia will lose out, because the market opportunity for sales of chilled beef will drop.”

“The shelf-life regulatory issue is one of the trade issues of highest importance in the region at the moment,” he said.