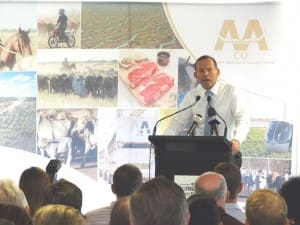 The $93 million installation, which began operations in October last year, will eventually have the capacity to process 220,000 head of cattle a year on a two-shift-per-day basis.

It will provide boxed manufacturing beef to domestic and international markets, including the US and Asia.

Livingstone represents the first ‘ground-up’ establishment of a significant beef processing facility in Australia since the failed producer-owned Beeflands plant at Coominya in southern Queensland in 1994. That project lasted just two years before being sold to US-based Keystone Foods and Australian Foods Corporation.

“AA Co has been investing in Northern Australia for more than a century, and it is 95 years since our first investment in the Northern Territory – but we have never seen business opportunities of the magnitude we are seeing right now,” Don McGauchie told the gathering of government, business and local community leaders.

“Asia’s growing middle class is projected to number 3.2 billion by 2030 – and is expected to double the region’s food consumption by 2050. As a consequence, we are on the cusp of an export bonanza,” he said.

“Livingstone Beef provides new avenues for beef producers in the north to market their beef to Asia and the world.

“Having a state-of-the-art facility like Livingstone Beef in the north means that producers who had once held on to cattle because they were not suitable for live export and because it was too expensive to ship them to the east coast can now substantially improve their herds,” Mr McGauchie said.

Prime minister Tony Abbott said the opening of the Livingstone facility was a very exciting day for the Territory.

Mr Abbott said that thanks to the Free Trade Agreements put in place by Andrew Robb under his Government, the prospects for Australian agricultural exports, particularly beef, had never been better.

“The concept was seeded in the darkest hours of the Indonesian live export crisis in 2011,” she said.

“Today and into the future this facility will bring increased market diversity and opportunity for the northern cattle industry. It’s an exciting, innovative, growing and resilient industry which provides much of the fabric of northern Australia.”

She said the AA Co facility’s main value would be in delivering competitive tension in the region’s cattle marketplace, which has previously been criticised for having an over-reliance on live exports.

“This facility will give producers another market outlet – it’s very exciting and also a sign of faith in the north,” she said.

NT chief minister Adam Giles said the new AA Co abattoir at Livingstone was a sure sign of positive investment: an abattoir that had the capacity to take 300,000 cattle per year, sending bulk beef into Asia, and creating 300 additional jobs.

AA Co chairman Don McGauchie said Livingstone Beef had now been operating for more than three months, and the company was ‘very pleased’ with the progress so far, as it continue to ramp up to a full one-shift capacity processing 500 cattle a day.

He said the recent trade agreements with Japan, Korea and China would open up further market opportunities for the facility.

“We want Northern Australia to grasp the opportunity of being a supplier of high quality food for Asia’s middle class, and really become Australia’s own land of opportunity.”

“We want to revolutionise the northern beef industry – and create a new channel to Asian markets. We want Northern Australia to benefit from Asia’s growing prosperity. And we want the ‘Asian century’ to be Australian agriculture’s century.” 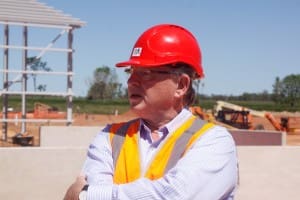 Mr McGauchie paid tribute to the support the project had received from Mr Abbott and his Federal government, together with chief minister Giles and the Northern Territory Government.

He also commended the “magnificent work” done by trade minister Andrew Robb and the Federal Government in securing Free Trade Agreements with Japan, Korea and China.

“Together with the Howard Government’s Free Trade Agreement with the United States, these agreements open up the market opportunities that make it possible for us to invest in ventures like this,” Mr McGauchie said.

“Today is a special day for AA Co, and the staff who have brought this dream to life.”