A UNIVERSITY researcher has developed an AI-powered facial recognition system for cattle that has demonstrated near-perfect accuracy in early testing.

Human facial recognition technology, used to unlock smartphones and speed up airport immigration processes, has swiftly become normal for people. Now a University of New England researcher hopes to make it standard in the livestock industries. 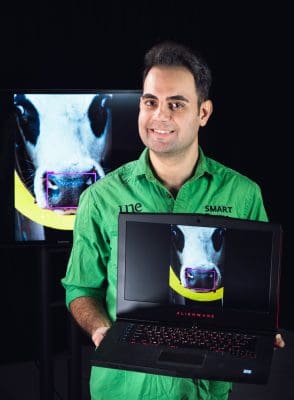 For his PhD research, Ali Shojaeipour developed artificial intelligence that is capable of identifying individual cattle via their muzzle patterns with greater than 99pc accuracy.

Dr Shojaeipour believes that if scaled-up, his technology could replace stock brands and eartags as a non-invasive, non-falsifiable method of livestock identification. Such an innovation would provide significant benefits for both the Australian and global livestock industries.

“We’ve been able to show that livestock biometric monitoring could potentially be used in future agriculture decision support systems for resource management at multiple scales of production,” Dr Shojaeipour said.

Taking the technology from his current proof-of-concept to commercial application will be a big undertaking, the Iranian-born computer scientist acknowledges, but success could revolutionise livestock handling.

Researchers have previously extracted muzzle dimensions manually from images. For his AI-driven approach, Dr Shojaeipour had to take a two-step approach.

The software first detects cattle muzzles in an image, and then uniquely identifies the animal using its muzzle pattern. He then built a process based on machine learning that enables biometric identification of different cattle, capable of continually adapting and as new cattle are entered onto the database.

The results have been gratifying: across his test herd of 300 cattle, his system achieved 99.11 percent accuracy.

Dr Shojaeipour is currently building a smartphone app that can identify individual cattle via the phone’s camera.

However, Dr Shojaeipour says that his technology requires some development before it is ready for the muck-and-dirt reality of farms, feedlots and saleyards.

He built his AI models during the coronavirus lockdown, when his ability to work with real cattle was limited. As a result, “while other people have pictures of their family on their walls, I have pictures of cattle faces.”

Getting the technology to work with moving cattle, with dirt and other distractions, will require substantial work – but Dr Shojaeipour believes it is possible.

He is currently undertaking that work himself, but is searching for backing to build a team that can progress the project quickly and translate academic findings to industry impacts. If he succeeds, it may not be long before livestock identification takes on a new, AI-powered form.