THE national cattle herd rebuild will proceed as a result of lower slaughter volumes and the continuation of strong seasons in most cattle regions across the country, according to the latest Cattle Industry Projections update from Meat & Livestock Australia.

Significant challenges around processor capacity and throughput have impacted the full potential for production which has resulted in revised slaughter numbers to 6.15m head, down from 6.7m head. 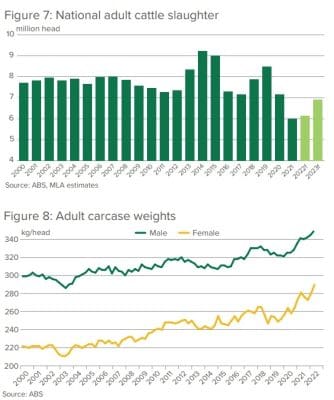 “Supply and demand for Australian beef is forecasted to increase as we strengthen our position in emerging international markets such as Indonesia and Thailand,” Mr Bignell said.

“An increasingly efficient and dynamic export market and resilient supply chain will mean that the Australian beef industry is well placed to capture opportunities as slaughter and production ramps up.

“For northern Australia, they will require an above-average wet season in order to turbocharge their rebuild following a disappointing 2021-22 wet season.”

In addition, as the herd matures from rebuilding, many young females are expected to come into calf for their first or second joining. With favourable reproductive conditions and higher than average joining and branding percentages, the national increase of the herd is expected to continue.

“Southern Australia are driving the higher prices in the market and the strong demand for young heifers. Meanwhile, the northern systems have seen a lower-than-average wet season, with mustering starting earlier than usual.”

Carcase weights are forecast to continue to reach records moving through 2022. Carcase weights in the first quarter of this year have reached a national average of 324.4kg per head – 10.8kg higher than the average in 2021 – due to good seasonal conditions across Australia.

“After an easing of slaughter rates, carcase weights have subsequently increased. This enables production to be maintained at a high rate.

“In addition, large volumes of cattle in feedlots are driving the higher carcase weights along with higher prices, which are incentivising producers to increase weights before selling,” Mr Bignell said.

In 2024, carcase weights are forecast to remain high with large numbers of cattle on feed and prices remaining high. Strong seasonal conditions are allowing feed to remain abundant but increasing grain prices could put pressure on feedlot systems.