Inflation, sustainability and ASF to drive global markets in 2022 A display promoting Australian beef and lamb in China.

RURAL banking specialist Rabobank is forecasting 2022 to be a year of opportunity for Australia’s agriculture sector – with inflation, sustainability and African Swine Fever the main issues to watch.

The company has today released its Global Animal Protein Outlook, analysing the events and trends most likely to influence markets in the coming year.

With low supply around the world, the company’s animal protein analyst Angus Gidley-Baird said cattle prices were expected to remain high in the short term and start easing throughout the year.

“We believe cattle and sheep prices will remain strong in 2022, although we expect cattle prices to ease through the course of the year.”

Mr Gidley-Baird said beef production and exports were expected to increase about five percent, driven by a lift in slaughter numbers, which he expected increase more in 2023.

“While seasonal conditions have been favourable, we do not believe the cattle herd has seen a strong rebuild through 2020 and 2021,” he said.

“Instead, many producers have taken advantage of good feed availability and high livestock prices to trade rather than rebuild breeding numbers and this is prolonging the herd recovery process.”

The onset of African Swine Fever in China and other Asian countries has been credited for a surge in demand for Australian meat to replace it. According to Rabobank’s report it is likely to keep having an impact in 2022.

“The ongoing recovery of China’s pig herd is expected to be the largest single driver of growth in global markets in 2022,” the report said.

Both China and Vietnam are said to be recovering from the worst of the outbreaks, with herds being rebuilt in large farms and pork production increasing. The report said this trend was expected set to continue in 2022.

ASF is still active and impacting pork production in many other parts of the world, including the Philippines, Indonesia, South Korea and India.

The ongoing recovery of China’s pig herd is expected to be the largest single driver of growth in global markets in 2022.

Europe has also seen a surge in castes this year, especially along the Poland-Germany border. German authorities have reportedly said it will take years for its industry to recover.

While beef and cattle prices were expected to remain high, the cost of labour, shipping and energy were also expected to put pressure on input costs for producers. 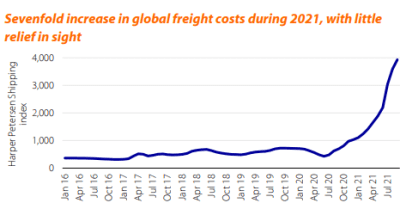 The report said labour availability was limiting production and slowing distribution for parts of Australia’s animal protein industry – an issue expected to continue in 2022.

“A lack of labour mobility combined with the industry’s reliance on immigrant labour is a growing vulnerability,” the report said.

“Mechanisation of the least desirable jobs will accelerate, yet the availability of technology solutions and equipment remain a hurdle – a situation made worse by COVID.”

Global shipping prices, which have been an issue for the agricultural industry all year, are expected to continue into 2022.

The report said fixing global shipping problems was dependant on a slow-down on consumer spending, which increased dramatically after COVID lockdowns. It said there had been investment into more shipping capacity, but it was not expected to come online until 2023.

Energy prices, including diesel, are expected to remain elevated until 2022.

Sustainability to have a market impact

Environmental sustainability and climate change have been dominating the news agenda in recent months, with the COP26 summit in Glasgow and political discussion around that meeting.

The Rabobank report said for producers to be able to capitalise on sustainability-linked markets, incentives will be needed.

“Consumers are often cited as a driver behind sustainability. However, outside of niche markets, most consumers have not yet demonstrated a willingness to pay higher prices for food with ‘more sustainable’ attributes,” the report said.