WIDESPREAD rain since February has fuelled the prospect of the national beef cattle herd entering a rebuilding phase for the first time in three years, Meat & Livestock Australia says in its Cattle Industry Projections April update.

Vastly improved conditions, combined with a positive rainfall outlook, has led to a forecast adult cattle slaughter for 2020 of 6.9 million head, a drop of 19 percent on 2019.

MLA senior market analyst Adam Cheetham said for the first time since 2017, many producers were now in a position to seriously consider rebuilding depleted herds, particularly across southern Queensland and New South Wales.

“From a cattle supply perspective, the impact of improved conditions on producer intentions is anticipated to see cattle turnoff decline to the lowest point since the mid-1990s and remain at historically low levels for the next two years,” Mr Cheetham said. 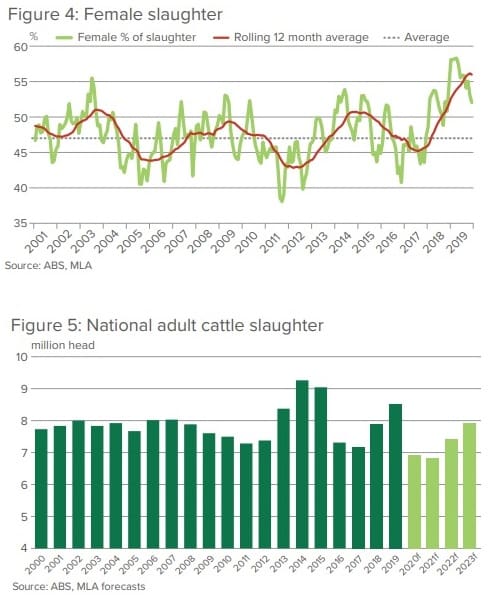 The flow-on effect of a sharp contraction in adult cattle slaughter has seen a decline of 16pc in the national beef production forecast to 2.05 million tonnes carcase weight, with increasing carcase weights only offsetting some of the decline in slaughter.

National adult carcase weights are forecast to lift 10.4kg to average 294kg/head in 2020, driven by an improvement in feed, lower stocking rates and easing percentage of female slaughter.

Intense competition for store cattle will challenge the lotfeeding sector and the number of cattle on feed is anticipated to ease, limiting the upside potential for average carcase weight gains, MLA’s forecast says.

Looking at exports, Mr Cheetham said amid the turmoil and uncertainty surrounding the impact of COVID-19, beef exports are forecast to reach 990,000t, back 20pc on last year.

“The COVID-19 global disruption outside of China, which intensified in March, will likely lead to some significant shifts in coming months,” he said.

“The impact of COVID-19 on each country’s red meat market will be shaped by many factors including its dependence on imports, level of disposable income, the prominence of red meat in consumer diets, as well as many evolving factors, such as the level of restrictions imposed by governments.”

The impact on the meat industry from COVID-19 was impossible to predict, but was likely to include an Australian and global economic downturn, a significant reduction in foodservice demand and reduced demand for higher value meat cuts, Mr Cheetham said.

“Critically, China appears to be emerging from its COVID-19 shutdown, with meat import demand beginning to return. However, the crisis has escalated across the rest of the world and will continue to disrupt supply chains and the consumption of Australian red meat around the globe in coming months,” he said.

“Balancing the uncertainty of COVID-19 with other key factors, such as African Swine Fever and the US-China Phase-One Agreement will be critical for the performance of Australian red meat in 2020.”

Mr Cheetham said global and volatile demand had applied downward pressure to cattle prices in recent weeks, after prices surged to record levels across all categories in March on the back of improved seasonal conditions.

“Looking ahead, driven by limited supply availability, domestic conditions continue to be a key factor influencing Australian cattle prices. However, developments in local and global markets, specifically foodservice demand and ongoing economic conditions, will continue to pressure prices,” he said.

“Currently, Australian prices remain out of sync with global price trends, largely due to the influence of domestic conditions.

“While this seesaw effect may continue given the global uncertainty, Australian cattle prices are expected to maintain a certain level of support for the next 12-18 months, given limited domestic supply and strong restocker demand.”