ONE of the key questions any industry must consider is: what is left behind when it is finished. For coal seam gas (CSG), this question is crucial, considering the thousands of CSG wells that have already been drilled, not to mention the many more that could potentially be drilled in the future. 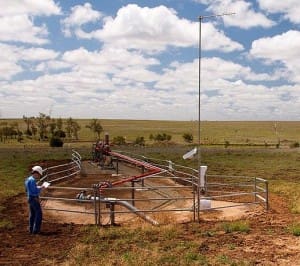 A coal seam gas well in a grazing paddock.

While most CSG wells will not be decommissioned until the later stages of a project, some wells are decommissioned earlier as they are no longer used for activities such as exploration, monitoring or production.

This provides an opportunity to ask the key question: what does successful decommissioning of CSG wells look like?

Australia has around 6,000 CSG wells in active production, mostly in Queensland, and a growing number of decommissioned wells.

Our new research looks at perspectives on decommissioning at different stages of the life cycle, including places where the industry is winding down (Camden, New South Wales), where it is continuing (Chinchilla, Queensland), and where future CSG development has been proposed but not yet approved (Narrabri, NSW).

We held a workshop in each of these places, bringing together between 8 and 16 people from state agencies, industry and local community in each location.

Workshop participants agreed strongly on several key principles: that decommissioned wells should never leak; that they should not impinge on future land uses; and that they should be barely noticeable.

Across all workshops, the majority of government and industry representatives expressed strong confidence in the code of practice for each state.

When decommissioned correctly, they argued, old CSG wells would not cause legacy problems and would not require further action.

In contrast, a majority of local community participants tended to lack confidence in these codes of practice, and said that clear information about well decommissioning was hard to access or understand.

As a result, they had markedly less confidence in the decommissioning process.

Our results suggest that clear, easily accessible information about CSG well decommissioning would help reduce this divergence of views.

Publication of factsheets by government, outlining the regulatory processes, who is responsible, ownership questions and what would happen if there were a long-term problem, would help to improve confidence in the decommissioning process.

Another way to improve trust would be for industry to provide plain language summaries of well completion and decommissioning reports, with local stakeholders given details on when, how and where to access them.

The ultimate authority to decide whether decommissioning and rehabilitation have been properly completed lies with the state regulator. Both Queensland and NSW have similar regulations for decommissioning of CSG wells, drawing on international experiences and lessons from past practice.

Decommissioning involves rehabilitating the surface around the well pad, and plugging and abandoning the well. Abandonment involves preventing the flow of gas or fluid with cement plugs placed throughout the well.

Consultation with landholders is required in both jurisdictions. Landholders declare whether they are satisfied with rehabilitation works, and can also negotiate to retain infrastructure such as fences or concrete slabs, if that suits their future objectives.

Regulators in both states require companies to make a deposit that covers the full costs of decommissioning, as a way of protecting against companies defaulting on their obligations.

Monitoring was another important issue raised through the workshops. Because the confidence held by government and industry representatives in the codes of practice was so strong and informed by lessons from decades of practice overseas, monitoring has not been seen to be required so far for decommissioned wells, after all steps in the code of practice were completed.

But local community members disagreed, arguing that ongoing monitoring of decommissioned wells is crucial to detecting and addressing any potential future problems. Instigating a program to monitor decommissioned CSG wells, with publicly accessible results, would go a long way towards addressing the concerns raised by residents and increasing confidence in the industry more broadly.

Read more: Not getting a social licence to operate can be a costly mistake, as coal seam gas firms have found

Different stakeholders in the CSG industry will not necessarily see eye-to-eye on all aspects of how the industry is managed. That’s why understanding their different perspectives is an important step towards providing reassurance about the legacy left by coal seam gas wells.

These steps could include monitoring abandoned CSG wells and improved mechanisms to deal with public enquiries, questions and complaints.