These 38 Angus weaner steers from Moulamein in the Riverina – 5-7 months averaging 124kg – made an AuctionsPlus c/kg record this week. for breed types other than Wagyu. Being sold because of local seasonal conditions, the calves returned 669c/kg or $815 a head, on-farm. A second run of 94 heavier weaner steers 162kg from the same vendor made 622.3c/kg.

HEIFER prices continued to climb, while heavier steer category values tended to stabilise – albeit still near record levels – on AuctionsPlus trading this week.

As described in Friday morning’s story, record numbers of commercial cattle were booked on Auctions Plus sales this week – comprising the weekly Weaner and Yearling Sale, Eastern States sale, and smaller fixtures in WA and Tasmania.

The Weaner and Yearling sale offered 13,886 head over 268 lots for a whopping 91pc clearance, while the Eastern States sale presented almost 4000 head over 112 lots. Combined, they accounted for 17,849 head, up an incredible 7006 head on the previous week.

Young steers in the sub 200kg range produced a 99pc clearance, and prices were up 105c/kg on the market this time last month, hitting new records.

The sheer weight of numbers on offer perhaps contributed to some reductions in value on PTIC cows, and cows and calves. After a huge jump in the market last week, cows and calves dropped in value by an average $363, with a reduced clearance rate from the 100pc seen last week.

PTIC cows eased $75 on average to $1830. Clearances were lower, with NSW PTIC cow entries dropping from 100pc clearance last week to 61c this week, as heavy supply and potentially, some buyer resistance set in.

Nationally, PTIC cow prices ranged from $1300 to $2625, with the top price returned from the North Coast, NSW, for a line of 23 Angus PTIC cows averaging 637kg, sold for Mill Creek Angus.

Cows with calves at foot also declined from earlier extreme rates, but still managing to average $2073. Nationally clearance rate took a dive with Victoria recording the biggest decline. A line of 18 fiver-year-old PTIC cows with calves from Sandy Creek, Victoria topped the market, making $2950. An offering of 17 joined cows and calves from Kalangadoo, SA also sold strongly at $2540.

PTIC heifers saw another lift in the market this week rising another $55 to average $1721. Clearance rate was significantly lower at 60pc, with prices ranging from $1300 to $2350. Top price among PTIC heifers was secured for 35 Angus heifers from the Berridge family near Tenterfield, NSW. These LPA accredited heifers were 100pc Speriby North blood and PTIC to Speriby North bulls.

South Australian vendors saw the biggest variance in average price for PTIC heifers, up $173 on last week to average $1724. Sullivan Pastoral near Canunda sold the top lot in SA, consisting of 50 heifers going for $1780.

Light steers less than under the 200kg mark saw a decent jump in the market, increasing 119c/kg from this time last month. They averaged 507c/kg, ranging in price from 411-669c/kg. The top price was a new AuctionsPlus c/kg record for breed types other than Wagyu, returned by 38 Angus weaner steers from Moulamein in the Riverina, 5-7 months averaging 124kg. Being sold because of local seasonal conditions, they returned $815 a head – an extraordinary sum, for 5-6 month old, drought-impacted calves.

Other highlights came from a line of 34 Charolais x Angus steers averaging 173kg from Mandurama, Central Western NSW which sold for 552c/kg.

Steers 200-280kg saw average prices at 471c/kg, a rise of 105c from this time in January. Prices ranged from 368-549c, with the best sellers being Angus weaned steers from Holbrook in the Riverina averaging 206kg at 5-7 months. A line of Charolais x Droughtmaster steers 264kg from QLD went for 461c.

Steers 280-330kg are up 92c/kg over the past month, averaging this week at 421c, and ranging from 345-486c. Angus weaners 8-10 months averaging 281kg from Merriwa, NSW topped the category. Second highest price came for 52 Santa backgrounder steers from Taroom, QLD averaging 285kg, which sold for 455c/kg.

Steers 330-400kg were up 78c from this time last month, to average 404c, ranging from 338-456c. The top 10 lots in this category were all Angus bred with the top price coming from Big Springs in the Riverina, NSW for 49 backgrounder steers 349kg selling for 456c, and travelling up to southern QLD. A line of 33 Hereford steers 313kg from Shooters Hill, Central Western NSW were next on the list making 399c. 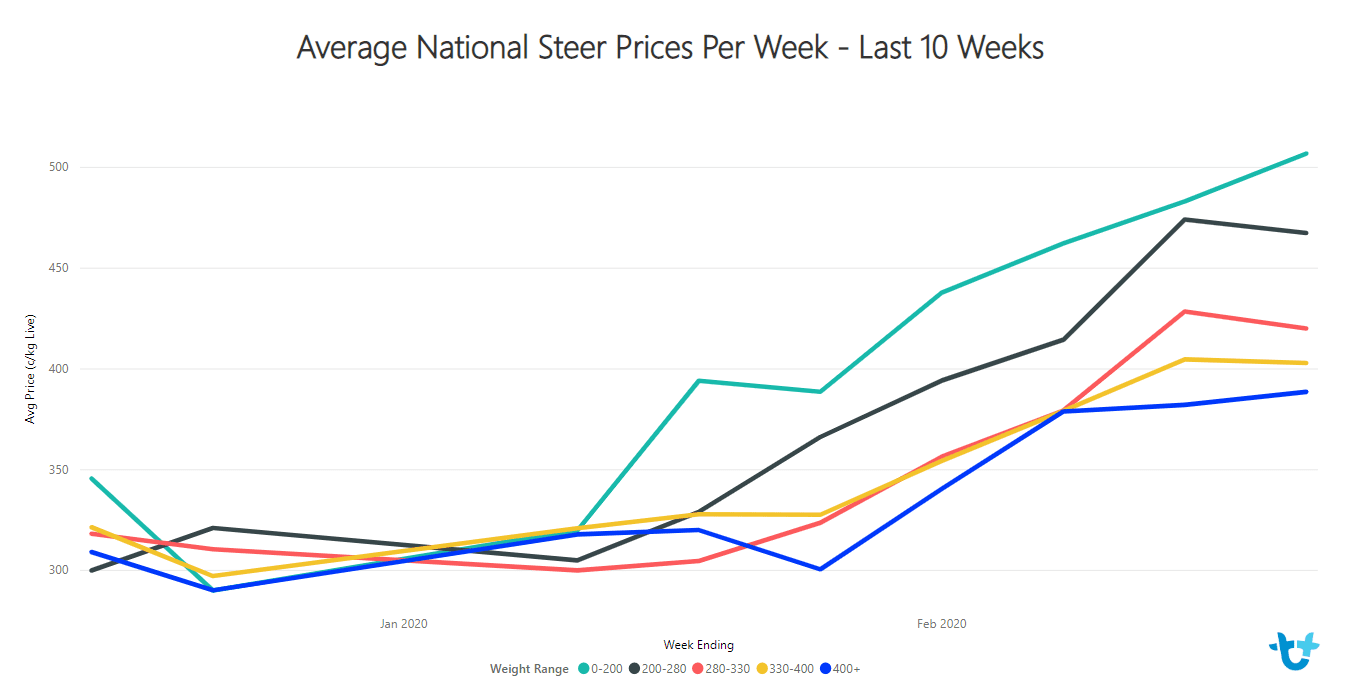 In heifer markets, heifers less than 200kg were up 39c/kg on this time a month ago, averaging 429c and ranging from 323-613c. Top price went to 51 weaned heifers for the Crawford family from Moulamein in the Riverina, 5-6 months, 119kg. In Queensland, Angus heifers 188kg returned 478c for Carabar Angus from Meandarra.

Heifers 200-280kg showed the biggest jump in price over the last four weeks, being up 105c,  averaging 413c this week and ranging from 303-557c. Top price went to Palgrove Pastoral Co, Cootamundra NSW offering a line of Angus heifers, 6-7 months averaging 239kg. Other highlights include a line of Droughtmaster heifers, 8-10 months, 230kg from Meandarra, QLD selling for 415c.

Heifers 330-400kg were up 62c over the last month, averaging 362c this week and ranging from 299-391c. Topping the section was 54 NSM future breeder Angus heifers selling for the Campbell Family Trust, Condamine QLD, 14-20 months, averaging 390kg. The next best were 17-18 month old Angus heifers from Victoria averaging 359kg, selling for 387c/kg.

Heifers more than 400kg were well found in the market, up 78c over the last month, hitting an average of 361c and ranging from 349-373c. The best off was a line of 17-18 month old 406kg Angus feeder heifers for Daiquiri Nominees, SA. A line of NSW Angus heifers 424kg, 16-18 months, were sold from Rennie in the Riverina and are heading to QLD.

In Tasmania, weaner heifers and weaner steers both took a tumble in the market, down 39c and 28c respectively. PTIC heifers averaged just less than the mainland at $1630, with the range from $1440-$2200. Top price was achieved by Deep Creek Cattle Services from Upper Stowport with a line of Angus heifers, 16-19 months, averaging 496kg. They were LPA, MSA, Nil Grain, Nil Antibiotic and Never Ever accredited.

This week’s WA sale saw a 98.6pc clearance rate on 483 head with 188 of them going into the Central and Hill regions of SA. Among them was a line of 9-10 month old Charolais x Angus steers 378kg, which sold for 321c. Top priced lot out of WA went to a line of Angus and Angus X heifers and cows sold for Henderson Glendale, 24-95 months, averaging 373kg dressed, which sold for 443.7c/kg dressed equivalent.