THE forecast for a La Nina rainfall event in 2020-21 provides anticipation for an improvement in seasonal conditions for Northern Australia, especially for the heart of cattle country in central Queensland.

However ongoing dry conditions and near-irresistible high prices in 2020 has seen a dramatic rise in the numbers of young cattle offered out of Queensland through AuctionsPlus this year.

In contrast, for many NSW and Victorian cattle producers, frequent and widespread rainfall since autumn has rejuvenated spirits, with resurgent restocking demand boosting prices across all categories.

The graph below places this increase in context with listings from NSW and Queensland over the last three years. 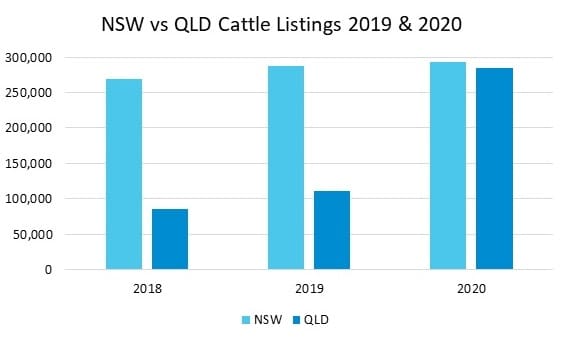 Categories registering the biggest spike in listings so far in 2020 have been lighter steers and heifers – up 288pc and 235pc year-on-year, respectively. The average weight of these stock categories so far has been 321kg for steers and 308kg for heifers.

In 2020, the contrast in seasonal conditions are a primary motivator for the movement of stock, along with the prices on offer. Producers in selected parts of southern Queensland, along with almost all of NSW and Victoria, are seeking cattle to replenish herd numbers following the drought. With the current high prices and tight supply, buyers are searching far and wide to secure lines of cattle.

67pc of Qld remains in drought

In contrast, parts of western, central and northern Queensland are still drought-declared, with the Queensland government reporting 67pc of the state in drought in August. While there are some areas that have received a break in the season, others are looking for the opportunity to offload stock and spell their country after years of drought.

Thus, the contrast in seasonal conditions meant that not only are Queensland producers confident their stock will be met with robust restocker demand, they have also cashed-in with record high prices.

The graph below demonstrates the difference in prices for weaner and lighter steers and heifers from Queensland in 2020, compared to 2019. 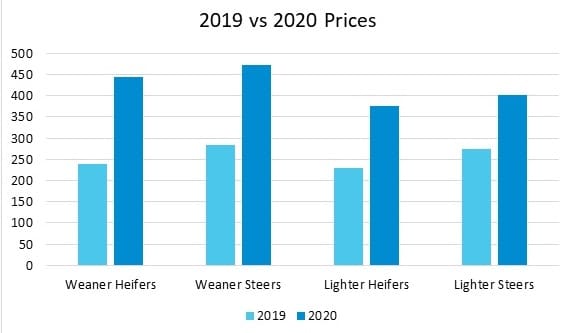 With the 159pc increase in listings, where are the young cattle from Queensland going?

The graph below demonstrates that 46pc of the massive increase in Queensland cattle sold on AuctionsPlus in 2020 have travelled interstate; compared to only 25pc of a much smaller offering in 2019.

New South Wales was the largest interstate purchaser, with the majority of the cattle heading to the NW Slopes & Plains, Central Western and Northern Tableland regions of NSW.

A recent AMI article noted that 61pc of all weaner heifers and 54pc of all cows with calves-at-foot have been sold to buyers from NSW, compared with 25pc and 13pc respectively, in 2019. 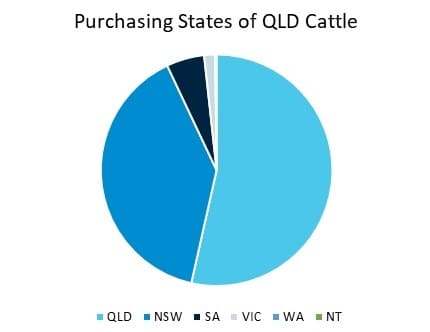 As the southern states commence the rebuilding phase, larger lines of cattle, particularly females, will continue to be in high demand.

While the forecast of the La-Nina weather event in 2020-21 has the potential to halt this migration of breeding cattle south, for now, the contrast in seasonal conditions and irresistible prices is expected to see Queensland producers continuing to capitalising on southern demand.

In a summary produced this week, Thomas Elder Markets draws attention to the spread in pricing for young cattle, north versus south.

It further explains the large exodus of cattle out of Queensland discussed above.

The Victorian Restocker Steer spread is running at a 2.2pc premium to the National Restocker, whereas normally for this time in the season it would be trading between a 1.7pc and 20pc discount, Mr Dalgleish said.

In the graph published below, mainland east coast cattle spreads highlight the most recent week’s price spreads compared to the ten-year average spread for the same week in the season. Included is a 70pc range (grey column) which shows how the spread can fluctuate season upon season, as the spread has historically sat within this banding 70pc of the time.

Queensland spreads from last week show most categories are within the range that could be expected for this time in the year, with the exception of the Queensland Trade Steer and Queensland Vealer Steer. Both of these cattle types are below where they would normally trade. 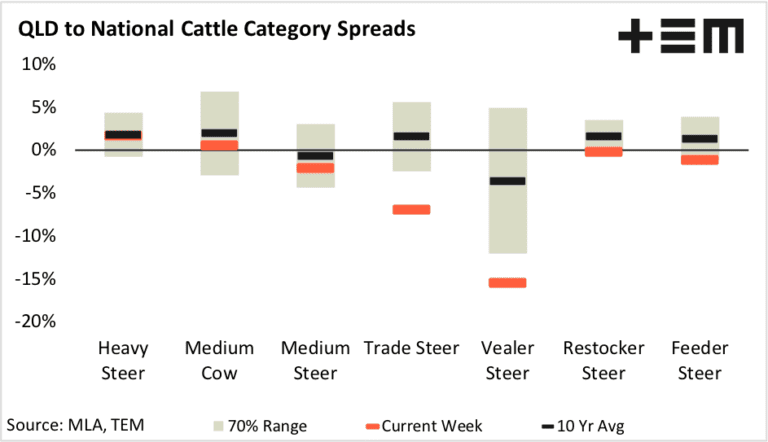 New South Wales cattle spreads highlight why the National Vealer Steer price is elevated and pushing the Queensland Vealer Steer to a wider discount than normal for this time in the year, Mr Dalgleish said. The NSW Vealer Steer and Restocker Steer categories are both above the upper end of their respective normal ranges.

“Given that last season the cattle herd declined 14pc in NSW, while it was off just 6pc nationally shows that there is some real incentive to chase younger/lighter store cattle in NSW saleyards,” he said. “The NSW Vealer Steer is running at an 8.4pc premium to the National Vealer Steer, the normal range is usually between a 9pc discount and a 5.6pc premium for this week in the year.” 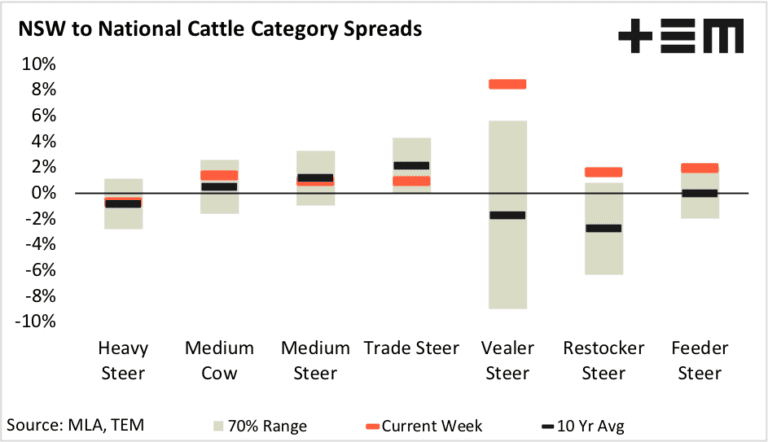