On February 25 the Jakarta press reported that the Indonesian Meat Slaughter and Traders Network (JAPPDI) members would be going on strike in the Greater Jakarta area from February 28 until March 4 in protest against the high price of cattle and beef supplies. 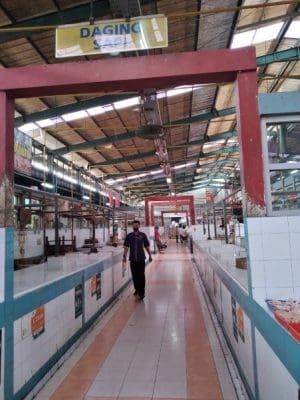 The photo above is of the BSD City Pasar Modern wet market on Tuesday 1st of March 2022.

As you can see from the photo above of the beef section (Daging Sapi) at Pasar Modern wet market in BSD City Tangerang, Jakarta, they did just that. Despite being limited to the wet markets and abattoirs of Greater Jakarta this demonstration of the level of feeling from the beef traders and abattoir operators will certainly have got the attention of the public and politicians so the aim of their protest has probably been achieved.

The Indonesian economy is managed in a very different way to the Australian system. Indonesian politicians use their massive bureaucracies and regulatory clout to control the supply and price of a wide range of key commodities regarded as critical to the daily lives of consumers. The very sensible and admirable aim of these controls is to prevent price gouging of critical commodities by unscrupulous traders. Rice is the most important one of these but a large number of other foods such as beef, cooking oil, chillies, garlic and many more have their prices loosely “fixed”. These commodities have an acceptable price range to operate in but once they go outside what is regarded as a fair upper limit then regulators use their very real and wide-ranging powers to come down hard on transgressors.

This process has worked quite well over the last 25 years as, in general, inflation was low and there was only a gentle rise in the price of most food items at a rate that was in most cases similar to or less than the rise in real wages. Prices of commodities such as beef have certainly risen over that time but the Indonesian economy has also been growing at a rapid clip of roughly 5% per annum with wages rising at a similar or better pace. This means that over time, the levels of these “fixed” prices is allowed to rise in line with the growth in wages and the general economy.

As consumers around the world know only too well, this quarter of a century or more of low inflation has come to a sudden end. The official rate in the USA today has shot up from about 2% 12 months ago to 7.5% today.  This is in fact a significant underestimate of the real inflation rate as the method of calculating the rate has been modified and fudged over the years by governments wishing to make it look lower than it actually was. Some estimates suggest that the real rate of inflation (using the old method of calculation) in the USA today is more like 12-14%.

The simple fact is that food prices are rising sharply across the globe with Indonesia exposed to these price rises just like everyone else. Grain prices were already rising sharply before 30% of the world’s export wheat was “withdrawn” from global supply. Roughly 20% comes from Ukraine and 10% from Russia. The price of bread and noodles must rise accordingly. Likewise, energy prices were also at uncomfortably high levels before the West decided to place sanctions on Russian energy sales.

On the 21st of February tofu and tempeh (a very popular fermented soybean product) producers also decided to stop production for three days starting last Monday in protest at the high price of imported soybeans. In the past, government intervention might have had some real impact, but those days are over.

Unfortunately for the Indonesian government they have no capacity to arrest price rises of these and many other imported products. Their large bureaucracies will be powerless in the face of skyrocketing world inflation. They may still be able to prevent unfair price gouging, but they can’t fight global food inflation. At a time when every cent needs to be saved, these huge bureaucratic food management agencies have a tendency to make the problem worse by adding their large administrative margins to final retail prices.

The Indonesian government has already responded with a number of initiatives such as increasing the allocation of permits for Indian buffalo meat (IBM) imports and encouraging the private sector and State-Owned Enterprises to engage in new beef production initiatives from the village smallholder level to corporate palm oil plantations.