The shipment marks the return of the live cattle trade to the small Queensland town, helping to allay fears about the future of the port which has been under a cloud since the closure of the Century Mine last year. 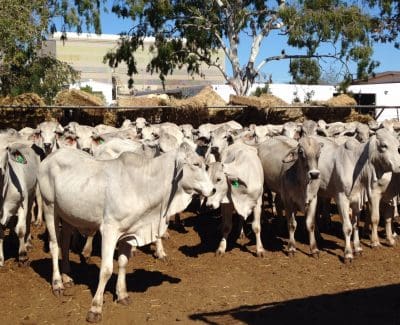 Brahman heifers in the holding yards at Karumba, ready for loading this week

The mine’s closure meant regular dredging of the port was under threat, but the channel has now been clear by the state-owned dredger, thanks to representations to the Queensland Government by local MP Robbie Katter.

SEALS director Dean Ryan said the consignment of heifers was being exported to Sabah in Malaysia and was the second shipment of commercial Brahman breeders, which were inspected by the Australian Brahman Breeders Association, to be exported from Karumba this year.

“Any opportunity to use the Karumba port to load cattle from the gulf country saves us from having to truck boat cattle to Darwin or Townsville, so it’s important that we keep this port open,” Mr Ryan said.

“We have the supply of quality Brahman heifers on our doorstep, so it makes good business and logistical sense to export out of Karumba. We hope the Queensland Government supports this vital port in the future because it plays such an important part in the local economy.”

“SEALS is proud to support Karumba and we encourage ongoing government support for this port and the region. And we’re proud to see the positive role that the livestock export industry can play in supporting the regional economy and local jobs,” Mr Ryan said.

Dean Bradford, from Karumba Livestock Exports which owns the Karumba export yards, said the consignment of heifers underpinned the important role the port could play in the live export supply chain.

“For the past six months or more, it’s been difficult to get cattle out of Karumba due to the dredging issue. Hats off to Robbie Katter for his fantastic support because he was able to get the dredge here and, as such, we’ve been able to load this consignment,” Mr Bradford said.