The process in which these Mexican cattle are exported is beautifully simple; they are merely walked into the US through specially made gates cut into the border wall made so famous by Donald J Trump.

AS Australian live cattle export numbers slowly decline, Mexico has taken over as the world’s largest live cattle exporter.  In 2020, Mexican exporters sent over 1.1M head across the border into the USA whilst Australia exported a total of 1.05M head. The year-to-date numbers from Mexico are down in 2021, but not as much as the reduction in Australian exports, so they appear likely to retain poll position once again this year. The process in which these Mexican cattle are exported is beautifully simple; they are merely walked into the US through specially made gates cut into the border wall made so famous by Donald J Trump.

After a brief visit to the spectacular Grand Canyon near Flagstaff, Arizona, Brisbane based exporter Angus Adnam kindly introduced me to Bernie Teran from the EMCO Cattle Co., one of the major US cattle importers who showed me around the border crossing at the small town of Douglas located to the south of Tucson, Arizona.

Despite the fact that the border is an incredibly restricted location, both governments have combined to establish a remarkably efficient crossing protocol, where animals are prepared in a yard on the Mexican side only a few meters from the border fence. Then, at a designated time, the special gate is opened by US officials and the cattle are simply walked across to the receiving yard on the US side, 20 meters from the gate, and the deal is done.

The three cattle crossings into Arizona at Douglas, Nogales and San Luis from the Mexican state of Sonora involve a much simpler process than crossing points in other States because Sonora is the only border state free of Bovine Tuberculosis. This means that TB free cattle can arrive in the Mexican quarantine yard one or two days before the crossing where they are weighed (sale point from exporter to importer), branded with an “M” for Mexico, inspected for health by US veterinary staff, scratched for ticks then dipped on the morning of the crossing. Once they successfully complete their protocols, the final documentation is signed off by the officials of both governments and the cattle are then walked across to the US side through the border fence in the early afternoon.

The export process into Texas (6 gates) and New Mexico (2 gates) from other Mexican states requires a TB test in the Mexican quarantine facility as part of their protocol and as a consequence the crossing process at these locations is considerably slower than in Arizona. I also managed to visit the largest crossing point in the entire US/Mexico border which is located at ‘Santa Teresa’ just to the West of El Paso.  This location has two massive sliding gates in the fence about 100 meters apart connecting to two extensive cattle yards to allow for the export of close to 500,000 head per year.

Current prices for these young cattle are about USD$1.80 per lb live weight which converts to USD$3.97 per kg or AUD$5.30 per kg (@75cents) which is remarkably similar to the current Australian price for these young Bos taurus crosses. Demand from Texan ranchers is strong this year as many have recently received some good rainfall while feedlots are finding the prices a little steep due to the sharp rise in grain prices in recent months.

The majority of these cattle are a mix of young British and European breeds with an average weight of a little under 200kg. The trade is primarily steers with spayed heifers representing only about 10% of total exports. The crossing protocol requires numbered ear tags and an RFID as well as the Mexican “M” brand. Upon arrival on US soil the cattle are rested then weighed again as the point of sale from the importer to the end customer and usually trucked out later on the same day. The country either side of the border is visually very similar to the harsh arid zones of central Australia, with a low and erratic rainfall and extremely low stocking densities.

There is a small reverse trade in the Mexican direction with a range of US stock including slaughter and breeder cattle, breeding pigs, dairy cattle, goats and horses.

As much as I have enjoyed my visit to the Mexican desert, I have since learnt that EMCO Cattle Co. also imports live cattle from the Hawaiian islands to California on container ships. With a bit of luck I’ll be able to investigate this export journey and write another story in the future. 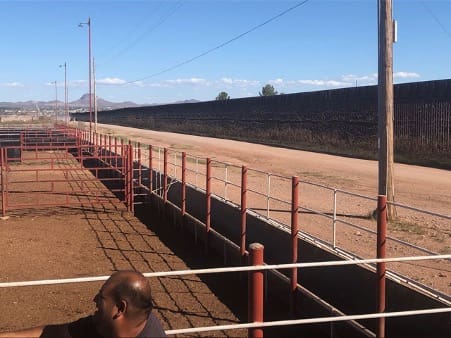 The massive steel border fence seen from the receiving yards on the US side. The white buildings on the left in the distance are in the town of Douglas, Arizona. Opposite Douglas to the right on the Mexican side is the town of Agua Prieta. The fence goes straight between these towns and over the hills on the horizon. 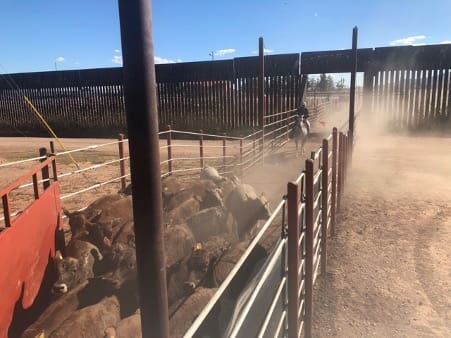 The cattle are brought through the fence from the Mexican side in small buyer’s lots of from 10 to 100 head by a single horseman. US border guards watch the process carefully throughout the crossing which in this case took about 1 hour to bring a total of around 1,000 head into the US. 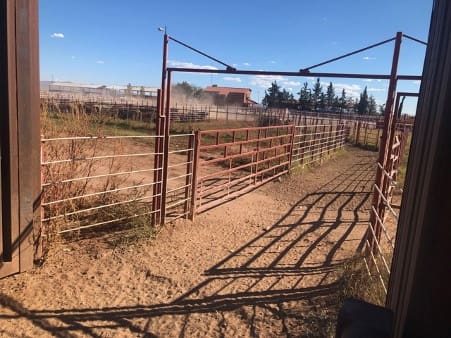 Looking through the gate into the Mexican export yard complex. 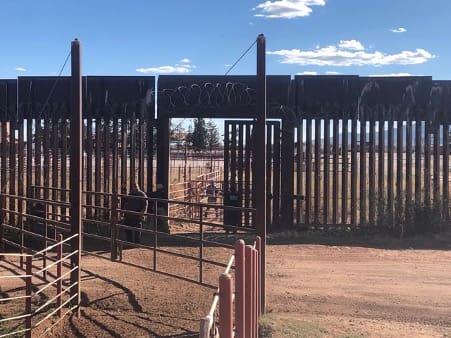 As soon as the crossing is completed the US officials close the gate and re-open the road which runs along the full length of the fence. The fence is made from vertical steel beams topped with huge steel plates laced with razor wire. 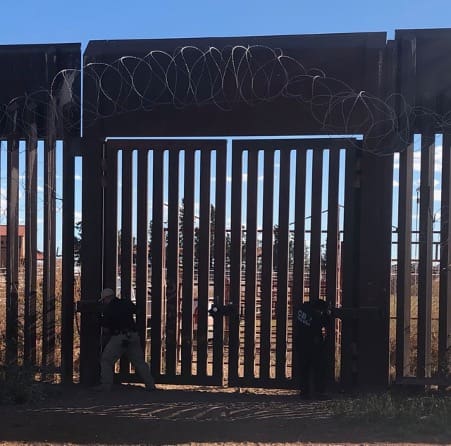 Border guards locking up the gate. Given the regular physical checks by staff in vehicles, a number of CCTV camera locations keeping a close watch and the massive locking devices, I think it is pretty safe from illegal activity. 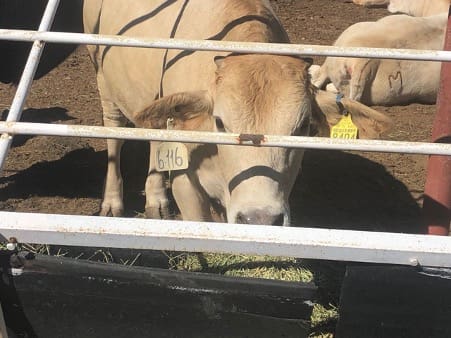 Lots of identification including two numbered tags, an RFID in the off ear and a metal tag in the near ear as well as the brand from the property of origin. Also note the fresh “M” for Mexico brand on the rump of the animal laying down. 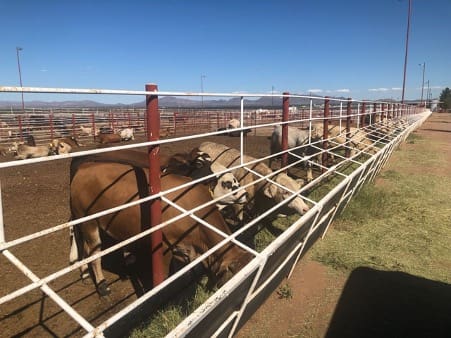 Stock are all fed on lucerne hay in the yards on both sides of the fence. After arrival on the US side the cattle are given access to water and feed for a few hours before they are weighed and trucked out to their final destination. 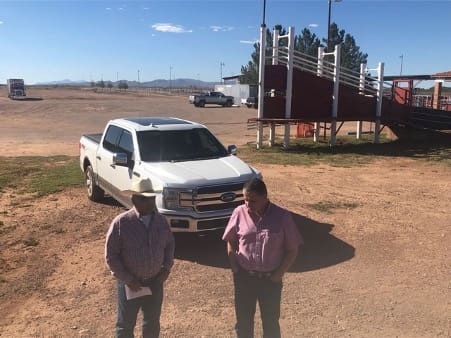 Bernie Teran, EMCO Cattle Co. (right) with the yard manager near the single loading ramp at this yard a few kilometers to the west of Douglas. One truck in the top left of the photo is already waiting to load out later this afternoon. 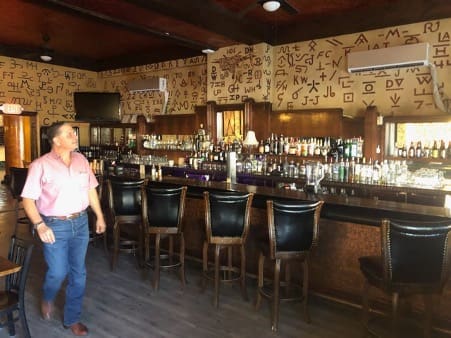 After a dusty afternoon at the yards we returned to the “Saddle and Spur” tavern in the historic Gadsden hotel for a cool drink and an exchange of import/export information. 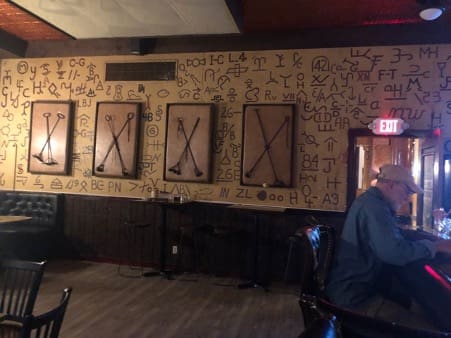 Most of the district ranch brands are represented on the walls of this magnificent establishment. 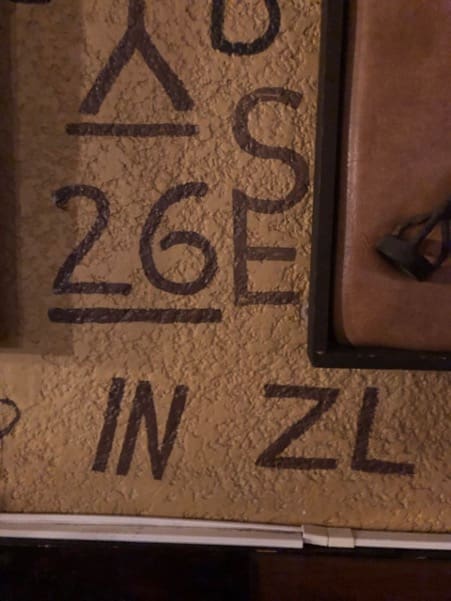 The 26SE brand belonged to John Wayne who owned a number of ranches in the Douglas area. He was a frequent customer of this bar where the beer is icy cold and the margaritas are exceptional. 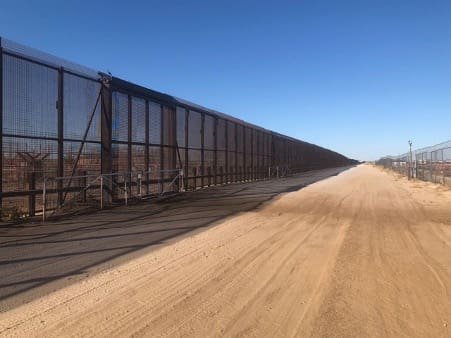 These two large sliding gates are at the Santa Teresa cattle crossing about 20 km to the west of El Paso. The white gates fold out to cross the road and connect to two large adjoining yards on the US side on the right. 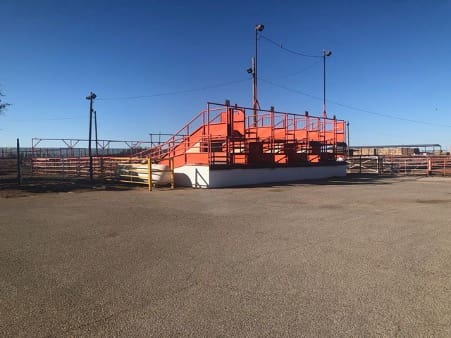 There are two of these loading ramps in this Santa Teresa yard complex allowing it to comfortably dispatch close to half a million head per year.