A livestock export vessel carrying 4237 cattle was forced to return to the Port of Portland yesterday when it began rolling from side to side soon after departure. 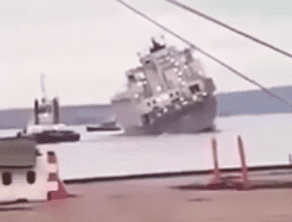 The Australian Maritime Safety Authority (AMSA) has since detained the vessel and is conducting an investigation.

However, according to a statement issued by the Port of Portland, soon after departure it was evident the vessel was swaying from side to side and just after exiting the harbour the pilot turned the ship back and headed back to port.

A video being circulated on social media (below) shows the vessel listing from side to side.

A statement from the Port said it had been reported that there were no injuries to the cattle or any personnel onboard.

“At this early stage it is not known when this investigation will be completed,” the statement said. “Until such time, Port of Portland is not able to provide any further information.”

The Jawan is a Panamanian flagged ship built in 2003 and owned by Mira International Shipping. It has been contracted to Livestock Shipping Services, but Beef Central’s inquiries today have not yet been able to determine if the vessel has been subchartered for this journey and which exporter is responsible for the stock on board.

The below video showing the vessel swaying from one side to the other has been shared on Facebook: