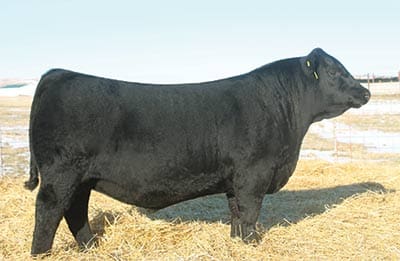 A WORLD record A$2.1 million has been paid for an elite 12-month old Angus bull in northern hemisphere spring sales in the US this week.

The new record easily eclipsed the previous high-water mark of $800,000 paid for SAV Elation at the same sale last year.

SAV America was an elite genetic performer across all Expected Progeny Differences, being in the top 3pc of the breed on $ value indexes for weaned calf value ($W), feedlot value ($F) and beef value ($B). See full EPD figures below. “The atmosphere was going crazy, you could feel the excitement in the air, even the auctioneer said it. He’s never had to say numbers that are that high,” Will Bollum, a field editor for livestock publication Western Ag Reporter told ABC.

The record-priced calf will remain at Schaff Angus Valley, which has retained a 20 percent semen share as part of the deal.

America is sired by SAV President, which sold for US$750,000, also to Herbster Angus Farms, at Schaff Angus Valley’s 2017 production sale. His pedigree is full of record-setting, high-dollar animals. His weaning weight is 1107 pounds (503kg), the highest on record for the American Angus Association.

Click the link below to view a short video of the auction, taken by reporter Will Bollum from the Western Ag Reporter.

Posted by Will Bollum – Western Ag Reporter on Saturday, 9 February 2019