Genetics review: “If you aren’t buying bulls with EBVs in the top 50pc of the breed, you’re going backwards” + Video

CONGRATULATIONS to stud breeders across the New England region who opened their herds for scrutiny during Beef Week recently. Cattle were presented in excellent condition despite the very harsh season being experienced.

Among them was David Murray, Kilburnie Angus, Walcha, has been breeding Angus since 1983. He has been a student of genetic evaluation principles, buying his first bull on recorded performance from Trangie Research Station in the late 1970s.

A one-time academic at the University of New England, David left the halls of academia to concentrate on breeding high performance Angus. He uses EBVs and Indexes to select his stud sires along with visual inspection for structural soundness and to ensure they are ‘acceptable’ to cattlemen.  Sires for AI use are only selected if they are in the top one percent of all Angus indexes.

Education of bull buying clients has been a particular mission of David and his wife Sue, taking every opportunity to run workshops and field days to inform their bull buying clients on latest technologies, especially on the value of EBVs and Indexes.

While more and more clients are understanding and using EBVs, he thinks that the way EBVs and Indexes are presented is particularly important.

“They must be presented in as simple a fashion as possible,” he said.

In keeping with this belief, Kilburnie sale draft will this year have EBVs and Indexes presented as percentile rankings, as well as the EBV values (see graphic below). 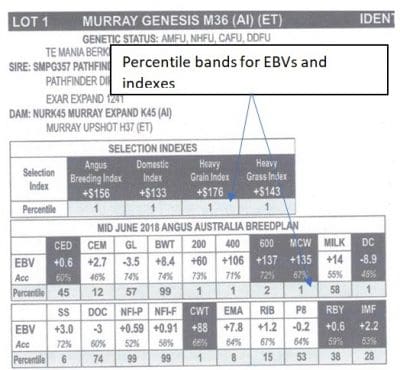 David says the important thing for buyers to know is where the bulls rank in the breed, rather than their actual values.

“If you are buying bulls that are below 50pc, you are going backwards,” he said.

Angus lead the way in terms of genetic progress, but other breeds are catching up. The Shorthorn breed for many years published an index without having a ‘days-to-calving’ EBV, and hence the breed’s progress was limited by the inability to make improvement in one of the major contributors to profit.

A visit to Sam and Jodie Martin’s Southcote Shorthorn Stud, Walcha, provides somewhat of a contrast to David. Sam is one of the younger generation of breeders and doesn’t have the same length of experience, but he still sees EBVs and indexes as important to his selection program.

Sam likes blending science with subjective assessment when planning his breeding operation and enjoys seeing the results of the plans as functional and fertile animals.  Paramount for Sam is structural soundness, but he sees the EBVs and indexes as a way to minimise the guess work for some of the more important traits.

The Southcote bull catalogue has some of the highest indexing bulls in the Shorthorn breed, and Sam is proud to point that out to clients and help the buyers to make better use of figures.

He thinks that more bull buyers are using EBVs and indexes when selecting new sires.

‘For 80 percent of our clients, EBVs and indexes are the first thing they look at,” Sam said.  They come to our sale with their catalogue already marked with the bulls that have the EBV profile that suits their objective,” he said. Sam Martin with breeders on his Southcote Shorthorn Stud, Walcha

Stud stock agent Nick Hall of Elders Walcha has been selling and buying bulls on behalf of clients for some years, and sees the full spectrum. He thinks that the use of figures is definitely increasing, but would like to see a uniform system across all breeds, plus the use of the raw data to help make the best decisions possible.

Nick has visited a number of client herds during Beef Week recently and is keen to point out that despite the poor seasonal conditions there are some very good bulls available, many with good figures. He thinks this year is will be a great year to pick up value for money, from the sales seen thus far when selecting new bulls.

Thanks to Steve Taylor for his comment on last week’s genetics column re his concern over selection for extreme growth.

Indexes are the best way to balance selection, and as long as the weightings on traits is appropriate, ‘extremes’ for any trait should not result, research shows.

When the index has appropriate weighting on calving ease and fertility, plus the cost of mature weight, then growth rate will be moderated.

Next week we will examine selection for fertility in more detail, but in most environments, fertility is the best monitor of what the ‘right cow size’ is.

Net Feed Intake (NFI) has been talked about for many years and improvement in feed efficiency is an obvious benefit to the industry – but there are still some unknowns with NFI.

Of greatest concern is the relationship between NFI and female fertility. There are some suggestions that as NFI improves, fertility may be adversely affected.

Roger Zuill (see last week’s column) and David Murray are both quite convinced that selection for improved feed efficiency is important for industry improvement, but if there is a negative association between NFI and fertility, then the overall change may not be positive. 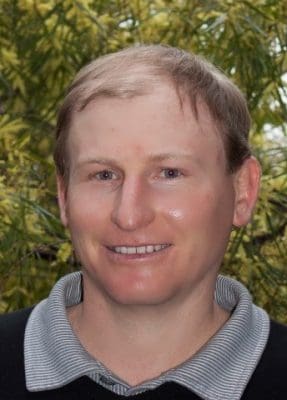 Dr Brad Walmsley of the Animal Genetics and Breeding Unit (AGBU) says that if NFI is used in an index in conjunction with days-to-calving, both traits can be pushed in the right direction.

Dr Walmsley looks after the development and maintenance of Indexes in Breedplan and has done preliminary studies on indexes that incorporate NFI. He is confident that indexes will balance the selection for both traits, but warns that selection for NFI independently could cause problems, just as in any single trait selection.

To date no breed society has included NFI in their indexes but some pastoral company indexes have been using NFI for some years.