A year ago, the laboratory was conducting about 4000 genomic tests on cattle per month, but the same facility now runs a total of 14,000 genomic tests per month – about half of which are for cattle and half for sheep through the Sheep Cooperative Research Centre. 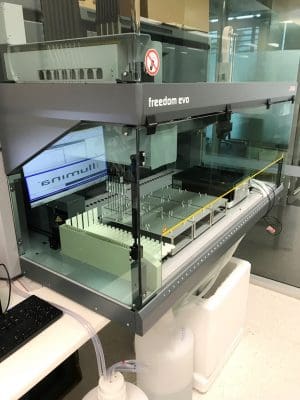 Neogen’s large investment in its Gatton laboratory, including installation of up-to-date analytical equipment and the introduction of robotics for DNA extraction, has brought efficiencies of scale, allowing a significant drop in the price of genomic testing.

The progress reflects the rapid increase in adoption of genomics testing being seen across the Australian beef industry.

In addition, NAA conducts genomic tests for parentage and genetic defects for companion animals for a third-party company. To cope with the huge increase in testing volume, robotics have been introduced to the process, and there has been a 75 percent increase in staff numbers from 16 to 28.

This has created the need for a significant expansion of laboratory space with NAA set to move into a larger refurbished building on the Gatton Campus of the University of Queensland in mid-June.

Neogen Australasia general manager Dr Russell Lyons (who was also the manager of the former UQ AGL laboratory) said the acquisition had brought efficiencies of scale which had allowed a significant drop in the price of genomic testing.

“Neogen has made a large investment in the laboratory by installing up to date analytical equipment and also the introduction of robotics for DNA extraction in the genomics room,” Dr Lyons said.

Headquartered in Lincoln, Nebraska, GeneSeek Inc has been leading advancements in genomics on a global basis since 1998.