By the same logic, what 90,000 people experienced in Rockhampton last week must rank as Australia’s worst vegetarian expo.

Barely a lettuce leaf was in sight at the Rocky showgrounds where an estimated 100,000 individual beef meals were served in a mouth-wateringly diverse range of ways, from artisan burgers, hot dogs and kebabs to seared steaks and sumptuously cooked secondary cuts including beef cheeks and briskets.

As one CQ beef producer remarked as he cleaned up the last morsel from a slow-cooked rib, “for 30 years we threw these bits to the dogs, now there are clean bones on every plate.”

Beef 2015 was all about mixing business with pleasure – a place to catch up with old mates, learn a thing or two, negotiate a bargain, forge new partnerships, cement old relationships and do deals over beef, beers and bull judging.

The official Guiness world record for the largest gathering of people wearing Akubra hats was apparently set at Kempsey in 2012, when 1912 were photographed wearing the iconic bush hat in the same place. Had a Guiness representative dropped into Beef 2015 at any stage last week, it’s easy to imagine that record would have been broken many times over.

The sheer scale of Beef 2015 was a spectacle to behold.

This was the tenth triennial Rocky beef expo and easily the biggest yet, with more than 4000 cattle, 600 trade sites, 1100 international visitors and a week long seminar-program involving 120 individual speakers.

The responsibility for pulling it all together fell on the shoulders of just 12 committee members and a small team of full-time staff and volunteer supporters.

That they each accepted the challenge – despite many having their own businesses or companies to run – is something for which the entire industry should be grateful.

Because, above all, Beef 2015 proved to be an extraordinarily positive showcase for Australia’s multi-billion beef industry. It generated reams of mainstream and social media attention both nationally and internationally, with many foreign media news crews also beaming stories from the event back to countries like Japan, Indonesia, Korea, Vietnam, Europe and the US.

NAB’s social media team, which closely monitored Twitter traffic from the NAB stand throughout the event, noted that the #BeefAust2015 hashtag trended across Australia multiple times during the week, placing beef among the most talked about social media topics nationally, and for the right reasons.

And how was the buzz?

Despite the devastating effect of drought across large swathes of western and northern Queensland, there was an unmistakable air of confidence at this year’s event, driven by the expectation that the worsening supply shortage in Australia and the strength of international beef demand will force prices higher.

Recent rises in cattle prices were a hot topic of discussion at Rocky, with some of the strongest market rises occurring during the week of Beef 2015 itself, as covered in this Beef Central article today.

A commonly-repeated message throughout the week-long seminar program was that the future lies in producing beef through customer-focused, quality-assured, independently-audited and smartly-branded supply chains, for producers to access higher paying markets and to return greater value at the farm gate.

It is not a new message, by any means, but one that appears to be finally gaining serious traction, with Australian beef now marketed under more than 100 individual brands, a number that only looks set to grow.

By any measure, it was a marathon event.

A commonly refrain was: ‘Loved it, thank heavens it’s only once every three years’.

By the end of beef’s biggest week, most people undoubtedly felt a bit like this little cowboy, tweeted by Trade & Investment Queensland’s Birnita Billing (BirnitaB@TIQ): 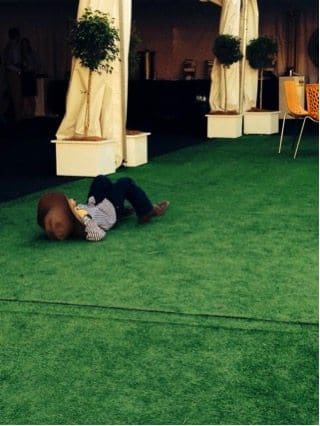 This littlest cowboy has hit the wall! #beefaust2015

Click on images below to view in larger format – pictures from Beef Central, Beef Australia and Derek Tan from Generator (www.generator.com.au)