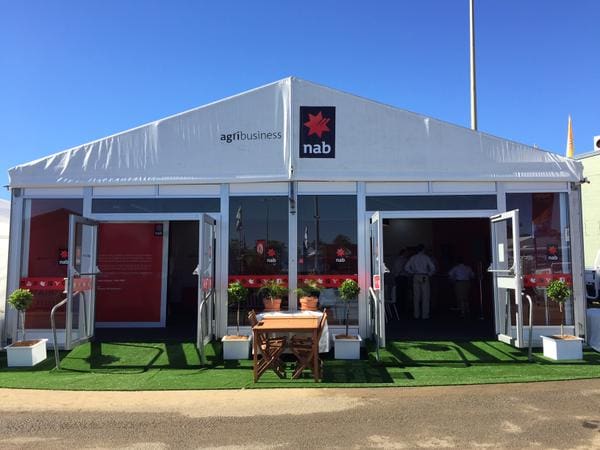 The NAB Agribusiness site at Beef 2015 where a social media ‘command centre’ helped visitors to better understand the role twitter, facebook and instagram played in communicating news and views from the event to the broader community.

The Australian beef industry is well and truly connected online, if analysis of social media use at one of Australia’s premier rural events held last week is any indicator.

The official Beef Australia hashtag #BeefAus2015 was mentioned 9975 times during the week, with a reach of 1.9 million unique social media users through Twitter alone.

#BeefAus2015 was trending in Australia on Monday and Wednesday last week, meaning the Rockhampton-based beef industry expo was one of the most discussed topics in the country on Twitter. 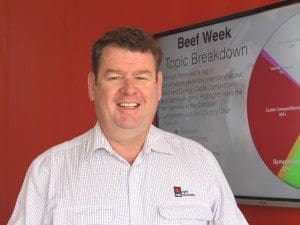 The analysis was conducted by the digital team at National Australia Bank Agribusiness, who reconstructed their Melbourne-based Social Media Command Centre onsite at Beef Australia for the week.

NAB Agribusiness general manager, Khan Horne, said the huge number of conversations on Twitter, Facebook and Instagram during Beef Australia proved that the way people on the land and in agribusiness connect with each other has well and truly moved into the digital age.

“The key message from visitors to the Command Centre is that they would like to make more use of social media in their own businesses to connect with customers and service their brands,” he said.

“Farmers used to stay in touch by picking up the phone or driving to town, but in 2015 farmers are able to get a lot of information they need from social media or websites – including prices and weather as well as interacting with friends, neighbours and communities.

“There is immense potential for primary producers and agribusinesses to use social media to reach consumers and creating advocates for their brands in a much more cost effective manner than traditional media,” he said.

“When we took visitors to Beef Australia through the functions of the Social Media Command Centre and showed them power and the reach of social media, the reaction was ‘we have to get into this’ or ‘we can expand on we are already doing.’

NAB Agribusiness plans to share all of the data collected to help Beef Australia organisers analyse the reach of their social media channels and official event hashtags.

* Exposure is the total number of times tweets about a search term are delivered to Twitter streams (number of tweets multiplied by followers for each tweet). The exposure of #BeefAus2015 was 18.8 million.