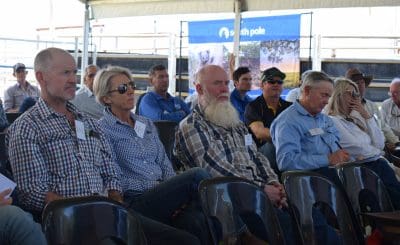 AS PRESSURE ramps up on the cattle industry to reduce emissions, a group of Central Queensland producers have taken a panel of scientists to task in an effort to better understand the challenges ahead.

Carbon was one of the main topics of the Clermont Beef Up forum, with the local research committee highlighting it as its main priority. The Central Queensland Beef Research Committee is one of many producer-les groups across the country who make recommendations to Meat & Livestock Australia to direct research funding.

While there was plenty of talk about the possibilities of the future, there was also plenty of confusion about how the cattle industry will reduce its emissions by 30 percent before 2030. 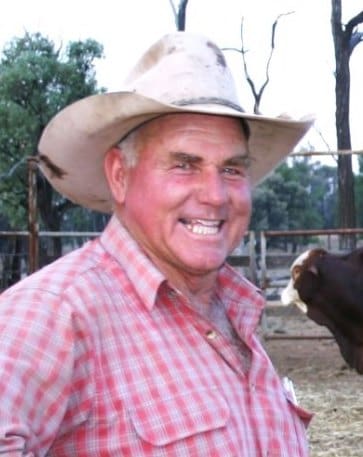 The most notable question came from John Burnett, (pictured) who asked the panel to put forward some “favourite” solutions in a similar fashion to the way bookies will be presenting the field at this week’s Melbourne Cup.

“I don’t want to back every horse, we have had 30 horses (solutions) in the last two days that are all going to make a difference, I want to know the favourites,” Mr Burnett said.

Mr Burnett said “if you head towards Emerald, you will see a lot of tropical legumes on the stock route that we are all concerned about ( a reference to wild leucaena). Try another one.”

The question started a lengthy debate on some of the possible ways of making significant reductions in methane before 2030. Putting more cattle in feedlots, widespread use of feed additives in grazing systems and selective use of legumes were all canvassed.

But it seemed each solution had shortcomings.

More feedlots mean more grain, more water and potentially more cropping on marginal land. Feed additives in grazing systems are only in the early trial stage of development, albeit with some promising candidates. And as Mr Burnett mentioned, wild leucaena can make an awful mess in a table drain – although plenty of advances have been made in that field.

The discussion flowed into the morning tea break where a lot of people remarked “I’m glad everyone is just confused as me about it.”

Animal welfare must be considered

Carbon remained a theme in other presentations, with parasitologist and vet Matthew Playford addressing it in his presentation about buffalo fly, worm and tick control.

“Animal welfare is part of our sustainability goals and around the world these parasite issues are becoming recognised as an animal welfare issue,” Dr Playford said.

“Resistance to all the parasites is worsening, which is robbing our cattle of growth rates.”

“Average daily gains, as we know, is the main driver of productivity, profitability and greenhouse gas emissions.”

More talk about carbon is likely to follow the Clermont Beef Up forum, with a session on research priorities concluding that it was the main preference for research.

Qld Department of Agriculture senior scientist Dr Hayley McMillan said in the short term there was likely to be a reliance on offsets to meet targets in the short-term.

“Until we can get some of these methane inhibiting technologies into extensive grazing systems, we are going to be reliant on sequestration in woody vegetation and hopefully soil carbon as well,” Dr McMillan said.

“But the sequestration bucket is not infinite, when it is full it is full. So, we are going to need those methane inhibiting technologies.”