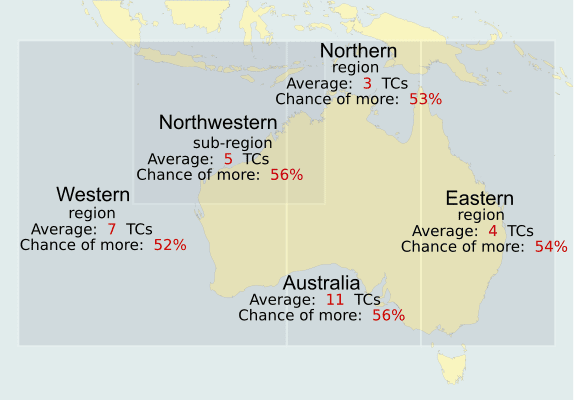 THE Bureau of Meteorology is predicting an average number of cyclones to occur over the 2017–18 Australian tropical cyclone season, which runs from November 2017 to April 2018).

This outlook is based on ENSO-neutral to weak La Niña-like conditions in the tropical Pacific Ocean and slightly warmer-than-average ocean temperatures to the north and east of Australia.

Sea surface temperatures in the tropical Pacific Ocean have cooled since July and are now below average.

The majority of climate models suggest ocean temperatures may cool to La Niña thresholds during summer, although they predict a weak, short-lived event should one occur.

Atmospheric indicators of ENSO remain neutral. Ocean temperatures are currently 0.5 to 1 °C warmer than average to the north and east of Australia which marginally increases the likelihood of cyclones developing.

The outlook indicates that “a typical number” of tropical cyclones is most likely in the Australian region and all sub-regions for 2017–18.

Tropical lows that do not intensify into cyclones, or lows that are the remnants of older cyclones, can still cause widespread rainfall and dangerous flooding.

These impacts can extend beyond the tropics into southern areas of the country.