AFTER rising abruptly and unexpectedly into positive territory in early March, the Southern Oscillation Index has again plunged into the negatives, logged by the Bureau of Meteorology at minus 12 over Easter. 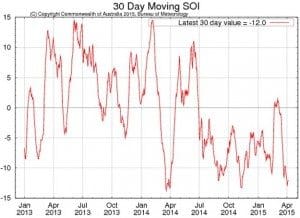 Click on image for a larger view. Source: BOM

The SOI has decreased further over the past two weeks, falling to values which can be indicative of El Niño, if sustained, the Bureau warns.

BOM says the passage of tropical weather systems near Darwin or Tahiti during the 30-day window will contribute to fluctuation of SOI values. Fluctuation of the SOI associated with tropical systems is common during the first quarter of the year, it says.

It remains to be seen whether the current fall in the SOI is a result of transient tropical weather systems, or a more sustained shift towards El Niño-like conditions.

Sustained positive values of the SOI above +8 may indicate La Niña, while sustained negative values below −8 may indicate El Niño, BOM says. Values of between about +8 and −8 generally indicate neutral conditions.

Recent warming of the tropical Pacific Ocean has primed the Pacific for El Niño, BOM says. However, history has shown El Niño does not always develop from the ocean trends currently observed.

International climate models monitored by the Bureau indicate the central tropical Pacific Ocean is likely to continue to warm, with all models predicting El Niño thresholds will be reached or exceeded by mid-year.

However the accuracy of model outlooks at this time of year, the traditional El Niño–Southern Oscillation (ENSO) transition period, is lower than for outlooks made at other times of the year.

Hence, some caution should be exercised when using model outlooks to predict the likelihood of El Niño.

The Bureau’s ENSO Tracker remains at El Niño WATCH status. This means that when current observations and model outlooks are considered together, there is about a 50 percent chance of El Niño developing in the coming months, which is twice the normal likelihood.

El Niño is often associated with below-average winter and spring rainfall over eastern Australia and above-average daytime temperatures over the southern half of Australia. However, in the shorter-term, much of Australia is likely to have a wetter-than-average April to June. See the latest climate outlook.