The Bureau of Meteorology now provides a video explanation of the latest seasonal climate outlook for Australia. Click on the video above to watch. 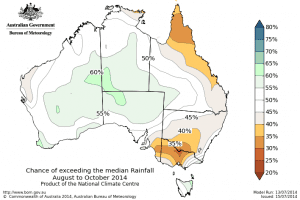 The chances of exceeding median rainfall from August to September. Click on image to view map in larger format.

The Bureau says the chances of receiving above median rainfall for August to October are less than 40pc over northern Queensland, southern NSW, the far southeast of SA, and most of Victoria.

In other words, this means the chances of below median rainfall is greater than 60pc in these areas. For every ten August to October outlooks with similar odds to these, about three or four of them would result in above-average rainfall over these areas, while about six or seven would be below average.

Over the rest of the country, there is no significant shift in the odds towards either a wetter or drier than normal season; the main exception is an increased chance of a wetter season over parts of the red centre.

Climatologically, areas of tropical northern Australia have at least two months of the dry season left. This means that the median rainfall at this time of the year is far less than during the summer months.

The Bureau says the outlook accuracy is moderate to high over most of the eastern States, the NT, SA and patchy over WA.

Warming of the tropical Pacific Ocean over the past several months has primed the climate system for an El Niño in 2014. However, in the absence of the necessary atmospheric response, Pacific Ocean temperatures have either stabilised, or some cooling has occurred. Despite some further easing in the model outlooks, a majority of international climate models still indicate El Niño is likely to develop during spring 2014. While there are some differences in ENSO outlooks, the near-average to drier-than-average signal across eastern Australia is generally consistent between international models.

The Indian Ocean Dipole (IOD) index has been below −0.4°C (the negative IOD threshold) since mid-June. Model outlooks suggest the IOD is likely to return to neutral by spring. A negative IOD typically brings wetter winter and spring conditions to inland and southern Australia. It is possible that the effects of the Indian Ocean and Pacific are competing to some degree, minimising the likelihood of broader rainfall signals.

The national temperature outlook suggests that warmer days are more likely for the northern tropics, eastern Australia, and the southwest, and warmer nights are more likely over most of Australia except the Pilbara coast in WA.