Drier three months ahead for central and eastern Australia 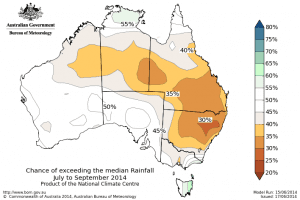 The national rainfall outlook for July to September 2014. Click on map to view in larger format.

Continued dry conditions are forecast for most areas of Australia for the next three months, according to the Bureau of Meteorology’s latest seasonal climate outlook released this morning.

The national rainfall forecast for July to September indicates that only eastern Tasmania can expect higher than average rainfall for the period.

The chances of receiving above median rainfall for July to September are rated at less than 40pc over parts of the northern WA interior, the southern NT, the southern two-thirds of Queensland, and most of NSW.

Chances are lowest in the inland northeast of NSW, where there is a less than 30pc chance of above average rainfall.

Over the rest of the country, there is no significant shift in the odds towards either a wetter or drier than normal season; the main exception is an increased chance of a wetter season over parts of Tasmania.

It should be noted that northern Australia is presently in its dry season. This means that average rainfall at this time of year is far less than is received during the summer months for most of northern Australia, except eastern Queensland.

The Bureau says warming of the tropical Pacific Ocean over the past several months has primed the climate system for an El Niño in 2014.

However, in the absence of the necessary atmospheric response, the increase in Pacific Ocean temperatures has levelled off in recent weeks.

Despite some easing in the model outlooks, international climate models surveyed by the Bureau still indicate El Niño is likely to develop by spring 2014.

While POAMA, the model that produces the seasonal outlooks, does not forecast a high probability of El Niño, it retains a drier signal across the country due to patterns in the ocean and atmosphere across the Pacific. This drier signal is consistent between international models regardless of their ENSO forecast.

Models indicate the currently warm Indian Ocean is likely to remain warm. The Indian Ocean Dipole (IOD) is expected to remain neutral for the next three months, and is therefore unlikely to have a significant influence upon this outlook. 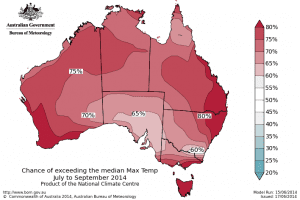 Changes of exceeding median maximum temperatures from July to September 2014. Click on map to view in larger format. 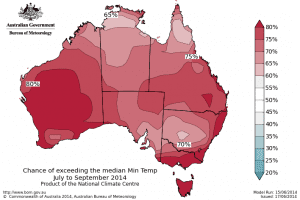 Chances of exceeding median minimum temperatures from July to September 2014. Click to view in larger format.

The outlook also indicates that warmer days and nights more likely for Australia for July to September.

The chances that the July to September maximum temperature outlook will exceed the median maximum temperature are greater than 60pc over Australia. Chances are greater than 80pc over southwest WA, southeast Queensland, northeast NSW, southern Victoria and Tasmania. So for every ten July to September outlooks with similar odds to these, about six to eight of them would be warmer than average over these areas, while about two to four would be cooler.

The chances that the average minimum temperature for July to September 2014 will exceed the long-term median are greater than 60pc over Australia. Chances rise to greater than 80c over southern and central WA, southern Victoria, Tasmania, and the eastern seaboard of NSW.