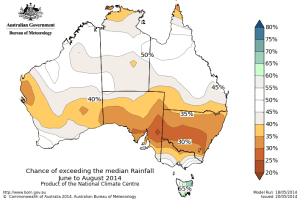 The national rainfall outlook from June to August 2014. Click on map to view in larger format

A drier than normal winter is forecast for southern mainland Australia, while all areas of the continent are expected to experience a warmer than normal temperatures throughout winter, according to the Bureau of Meteorology’s latest three monthly Seasonal Climate Outlook released this morning.

The national rainfall outlook for the next three months indicates that the chances of above average rain are below 40pc for parts of southern WA, most of SA, southern Queensland, NSW and northern Victoria, with chances falling below 30% over southeast SA, and southern NSW.

Eastern Tasmania is the one wet spot on the national rainfall outlook, where the chances of exceeding median rainfall are considered to be greater than 60pc.

For most areas of in the northern half of Australia, the odds of a wetter or drier than normal season are roughly equal.

The El Niño-Southern Oscillation (ENSO) remains in a state of transition towards El Niño. Most models used by the Bureau to assess approaching climate trends continue to point to the likely onset of an El Nino pattern during late winter.

Models are also indicating that the currently warm tropical eastern Indian Ocean is likely to return to near normal. The Indian Ocean Dipole (IOD) is expected to remain neutral for the next three months, and is therefore unlikely to have a significant influence upon this outlook.

Positive IOD events often coincide with El Niño and are typically associated with lower than average winter and spring rainfall over parts of southern and central Australia.