Working dogs fetch five times their worth in return-on-investment 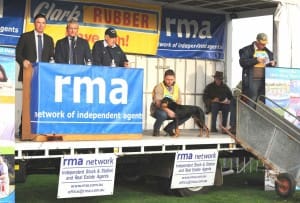 Good working dogs can cost thousands of dollars to buy – such as this $10,500 sale-topper at Casterton last year – but can return more than five times their purchase and feeding costs over their working lives. Picture: Ann James

Working dogs typically provide their owners with a five-fold return on investment.

The University of Sydney’s Farm Dog Project is already providing valuable information – starting with a list of the most desirable traits of a good working dog and the calculation of the return on investment of a typical dog.

The project seeks to measure and record behavioural and health attributes in farm dogs, aiming to create simple tests for pups as young as six months old to predict trainability and working life success.

It is a three-year collaboration between university researchers, the Working Kelpie Council of Australia, MLA and the Rural Industries Research and Development Corporation.

“We started by conducting the Australian Farm Dog Survey in early 2013, which drew a great response from 812 working dog owners around Australia,” Paul said.

“Results revealed the median cost of owning a working dog was estimated to be $7,763 for its working life. The work performed by the dog throughout this time was estimated to have a median value of $40,000.

“So, working dogs typically provided their owners with a 5.2-fold return on investment.”

The survey also asked owners to rate a selection of behavioural traits within three working environments – mustering, yard and all-round – and the trial arena.

“The traits considered of most value varied according to the working environment, but included the ability to cast, gather and force livestock, and intelligence, calmness and control,” Paul said.

“Boldness, in particular, was considered of high value.”

The team is now developing objective and subjective measures of the desirable traits, using DNA samples from more than 160 Kelpies, video footage of these dogs working, behavioural coding software, GPS tracking of dogs during peak work periods and interviews with owners.

Several litters of pups are being followed through to maturity to see how stable the traits are over time.

“We will also examine pedigrees to calculate the heritability of these traits and then use modern genetic mapping to identify DNA sequences associated with the most important traits,” Paul said.

“These genetic markers will be combined with the key behavioural traits to develop Estimated Breeding Values that can be used in selecting dogs for training and breeding programs.”

The project’s major goal is to develop simple, repeatable tests that will reveal working traits in puppies as early as possible and can be conducted by a novice owner. It’s a task Paul and his team have already completed for guide dog breeders.

“Using the tests we developed we’ve been able to identify dogs at six months old that are up to four times more likely to pass training than the average intake,” he said.

“We hope to achieve something similar for Kelpies to ultimately improve on-farm efficiency.”

“We know we can get even more out of working dogs, and best of all, in the process, give the dogs a better life,” the University’s Professor Paul McGreevy, said.

The study of the economic impact of farm dogs used data from over 800 farmers and estimated the value of the typical Australian herding dog.

Researchers found the median cost involved in owning a herding dog is $7,763 over the period of its working life, with work performed by the dog throughout this time having an estimated median value of $40,000.

“Herding dogs typically provided their owners with a 5.2 fold return on investment. Interestingly, given the value of their work, the median amount owners would consider spending on veterinary care for their most valued working dogs was between $1000 and $2000,” said Professor McGreevy, a researcher on the study.

“There are an estimated 273,000 working dogs in Australia, mainly on cattle and sheep farms, so this is a fascinating insight into the financial contribution they make to the rural sector.”

“By detailing the value of the typical herding dog, we hope to equip producers with information that may be used to improve on-farm labour efficiency and profitability,” said Liz Arnott, lead researcher on the study and a country vet.

The Faculty of Veterinary Science has also developed a tool to assess a dog’s emotional state. By judging how dogs respond to a series of trained tasks it is possible to assess their emotional state and open a window on their overall personality. The tests could identify dogs with emotional attributes suitable for service work and could help customise their training.

The research on working dogs was funded by the Working Kelpie Council of Australia, the Rural Industries Research and Development Corporation and Meat and Livestock Australia.

Professor McGreevy is the co-founder of the Working Dog Alliance.