A strong lift in prices at last week’s equivalent sale appears to be the catalyst behind a surprising surge in bookings for today’s Dubbo prime sale, where agents are drawing for a yarding of 8500 head – probably the biggest offering seen since February-March. 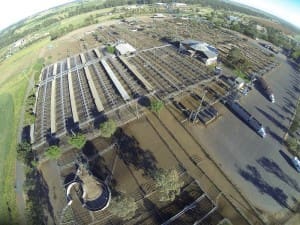 Even if the final number yarded today falls by 10-15 percent due to vendors’ fears of oversubscribing the market, which several local agents anticipated yesterday, the yarding will still be close to double the size of what it was last week.

Dubbo is one of NSW’s major regional selling centres, and attracts slaughter cattle from across a large footprint of western, central and northern regions of the state.

The spike in prices seen at Dubbo last week followed earlier excellent rain. Cows headlined results, selling as much as 15-30c/kg liveweight higher than a week earlier, while other descriptions also showed solid rises, with yearling steers and heifers and grown heifers all substantially better. Best cows at Dubbo last week made 158c, where the previous week, those same cattle might have made 128-130c, an experienced local agent said.

Elders Dubbo livestock manager Marty Simmons said Dubbo had probably averaged better than 5000 head a week over the past month, on a market that was “OK, without being too flash.”

“But just in the past seven days, the market has shown a pretty good kick. That’s what’s behind these extra numbers today, and we’re also at that time of year here where a lot of producers are starting to want to lock their crops up, as well.”

Mr Simmons said the strength in the market last week may have been linked to extra southern processing interests operating in the market, with Tabro Meats (see Beef Central’s earlier report in Tabro’s recent purchase) joining the buying gallery.

“That really livened the show up, and created a lot more interest in the cow job, and it has continued to roll since then. Gunnedah’s sale on Tuesday this week had cows making up to 141c/kg again, which hasn’t been seen for a long time.”

Asked if there was a risk of today’s very large yarding pushing prices lower again, Mr Simmons said he thought not. “There’s been good rain in the south which will stem their numbers, and we expect to see meatworks buyers here in force today,” Mr Simmons said early this morning.

“We fully expect to see some withdrawals, because vendors will tread warily, having not seen such large yardings for quite some time. But all that means to me is that we have an immediate carry-over of a couple of thousand cattle for next week, on top of what we would have yarded anyway. I can see these numbers hanging around for another four to six weeks, yet.”

Within the 8500 drawn-for yesterday for Dubbo were 1700 cows, an unusually large number for this time of year. Cow numbers have rarely exceeded 1000 head in earlier sales.

“In my mind, over the past couple of years, our winter (sales activity) has almost become the new spring. Where once our springtime was our busiest period, producers here have bought that forward a couple of months,” Mr Simmons said.

“There’s definitely been an increase in numbers through the winter months. But having said that, if we go anywhere near the last six months of last year, it will be bloody frightening. We yarded anywhere from 6000 to 9000 cattle, week-in, week-out, for the back half of 2013.”

“That puts a lot of pressure on the whole system, as there was a lot of females involved, and the yards we have at Dubbo can really only comfortably handle 3000 cattle.”

Landmark Dubbo livestock manager Steve Gay said cattle being offered today had been drawn from a wide area, with a lot of cattle coming off agistment in western NSW, around Nyngan, Coonamble and Warren, including agisted mobs from the New England region that could not now go home due to seasonal conditions.

There was also a lot of local cattle and mobs from as far west as Broken Hill.

“Nobody picked it: it was just the strength of buying support from southern processors – we aren’t seeing northern operators like Primo or Bindaree operating, because prices are stronger down here, in general, that further north.”

Mr Gay said a lot of the cows being yarded for today’s sale were in good order, while the younger cattle tended to be a bit plainer in condition.